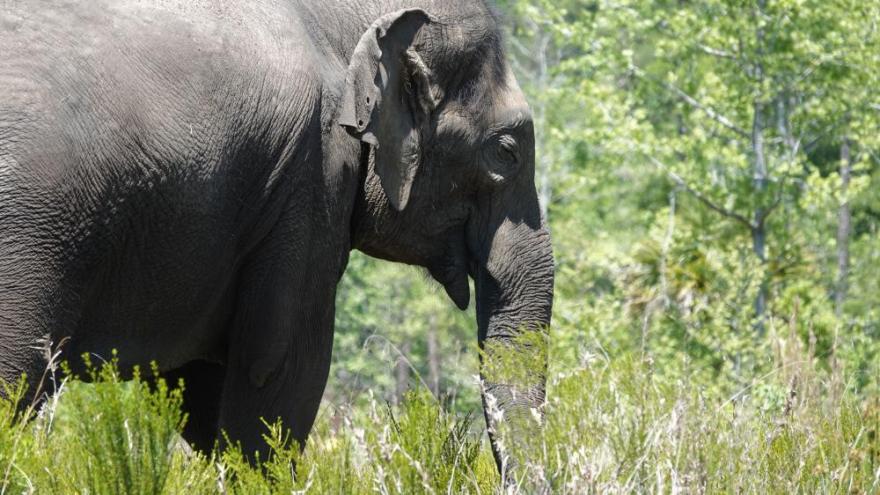 The elephants can wander around their new habitat and don't have to come back to their barn unless they want to.

(CNN) -- After years of entertaining fans under the big top -- and a few years in retirement -- in Central Florida, a herd of former circus elephants is settling into their new home at a wildlife refuge.

The 12 female Asian elephants arrived at White Oak Conservation, outside Jacksonville, Florida, recently and were released into a forest habitat with pine trees, ponds, wetlands and open grasslands, according to an announcement from the refuge.

The elephants range from 8- to 38-years-old and had previously belonged to Ringling Bros. and Barnum & Bailey.

They were all born in the United States and never lived in the wild, said Michelle Gadd, the chief of conservation for the Walter family, which owns White Oak Conservation and bought the animals from the circus.

"They are doing amazingly well. I am very surprised at how quickly they adapted to the environment, how readily they went out of the gates as soon as the gates were opened," Gadd told CNN.

She was afraid they would just hang out around their barn because they're used to being around people, but Gadd said the elephants will sleep out in the woods and venture on their own for a few days at a time.

Ringling Bros. and Barnum & Bailey retired its elephants in 2016 after complaints about their treatment by animal rights groups and regulators. The circus gave its final performances in 2017 after more than a 100 years of existence.

White Oak also bought the farm where the female elephants had lived in Polk City, Florida, near Orlando, which Gadd said is much smaller and doesn't have as many trees.

Asian elephants are listed as endangered with an estimated population of between 40,000 and 50,000 in the wild, according to the World Wildlife Fund. They once roamed across much of Asia but now are restricted to 15% of their original range. They are threatened by poaching, habitat loss and conflict with humans.

This elephant group has been socialized together the past two years and includes two sets of full sisters and several half sisters, Gadd said. They are also the youngest elephants and were expected to be the most adaptable.

Staff put out hay, produce and special elephant supplements around the habitat, but Gadd said the elephants are starting to eat some of the food options that are growing there.

They also like to dig up saw palmettos, and Gadd said they use the branches to scratch their undercarriage.
It took them a few days to get used to pine trees, which would spring back and smack an unsuspecting elephant in the face when they tried to snap them with their foreheads, Gadd said.

"On the first day it had scared them and one female trumpeted and ran away," Gadd said. "But by day three that tree was well and truly flattened."

The heard will be joined by up to 20 additional elephants from the Polk City farm once additional construction is completed on the 2,500 acre area. The space will be able to be divided into multiple habitats for different herds or to separate some of the elephants. It will also have three barns with high tech veterinary equipment.

The second barn is expected to be built next year, but Gadd said they aren't rushing the project.

"The elephants always take precedence," Gadd said. "So our priority is letting them settle in and be undisturbed here and have the whole place to themselves for a while without construction crews, and without disturbance, and without additional elephants even, coming right away"

Gadd said eight of the elephants at Polk City are males, who need to be kept apart by "a whole different level of fortification" of fences, barns and transportation.

"Asian males are not known to be forming cohesive groups that tolerate one another," Gadd said. "So we're not going to be moving multiple males up here until we have multiple habitats and barn spaces ready for them."

The Polk City farm is also home to some of the oldest female elephants in the US and some of them might not respond well to change, or the 200 mile trip to White Oak, which requires specially customized trucks for them and their veterinarians and handlers.

"We will continue to care for elephants there throughout their lives if they cannot be brought up here," Gadd said.

White Oak Conservation, a 17,000 acre refuge certified by the Association of Zoos & Aquariums, is home to many rare animals, including rhinos, cheetahs and antelopes.

It has worked with state and federal agencies to save Florida panthers, Florida grasshopper sparrows, Mississippi sandhill cranes and whooping cranes, according to its website.