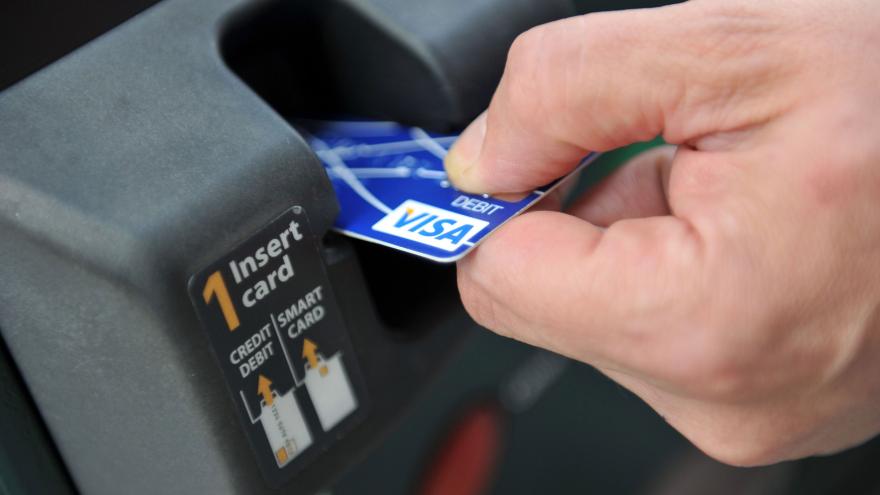 (CNN) -- Consumers could soon see even higher prices at some stores, after credit card giants Visa and Mastercard raised their "swipe fees" -- generating an additional cost that some retailers could be forced to pass on to their customers.

Last month, the two credit card companies raised some of their interchange rates, or fees that merchants pay with each credit or debit card transaction. These so-called "swipe fees" are then paid to the bank that issues the card but are largely invisible to the consumer. However, some retailers claim that the added fees will force them to raise prices or stop accepting certain credit cards altogether.

The changes to interchange rates -- which also include some decreases, such as certain transactions under $5, the credit card companies said -- were meant to go into effect in April 2020, but were postponed due to the pandemic.

Plus, the recent increases are on top of fees that merchants have already been paying to the credit card companies, said Doug Kantor, general counsel at the National Association of Convenience Stores and an executive committee member of the Merchants Payment Coalition.

Credit, debit and prepaid cards were used to make $9.4 trillion in purchases last year, according to the Nilson Report, a publication covering the payment industry. Out of those purchases, merchants paid about $138 billion in processing fees, Nilson reported.

"The increases a couple of weeks ago are really just the tail on the dog," said Kantor, who estimates the hikes will result in an added $1.2 billion in fees this year.

But at a time when more people are opting to use plastic over cash, Kantor and others see a bigger risk to raising these fees: inflation.

Interchange fees are applied via a complex system in which the charges vary by merchant, transaction size, the type of card, and the banking institution, among other factors.

In a recent report, Visa noted that a typical swipe fee for its cards includes a flat rate charge of about 5 cents to 25 cents and around 1.15% and 3% of the purchase price. For example, if a customer pays $100 using a traditional Visa rewards credit card at a small merchant, the retailer would pay $1.53 -- 1.43% plus 10 cents -- in fees that would then go to the bank backing that card.

If the fees rise, merchants may have to raise some prices to help offset the expense, Kantor said.

In a statement, Visa noted that the fees aren't charged directly to consumers, and they are not tied to inflation or the price of goods. However, it said: "Like any line item for their business, merchants price their goods based on their costs... Any increases in the amount of interchange fees paid year to year often reflect an increase in merchant transactions or sales revenue."

The inflationary concerns were highlighted earlier this month during a Senate Judiciary Committee hearing on interchange fees. The hearing was chaired by Sen. Richard Durbin, who was behind a2010 financial reform that limited debit card interchange fees.

Retailers are pushing for an expansion of the Durbin Amendment to include credit cards, but so far the senators have stopped short of calling for such an extension. Instead, they floated potential reforms, such as adding interchange fee disclosures to credit card statements.

"US swipe fees are the highest in the industrialized world, and the card system is clearly broken," Leon Buck, vice president of the National Retail Federation, wrote in an email. "This cannot be allowed to continue."

Visa and Mastercard say the fees have a value and purpose: They help fund rewards programs and banking services, and they also help to take a significant layer of risk out of the equation for merchants by guaranteeing payment regardless of whether the customer pays their credit card bill or in cases of fraud.

Banks absorb those costs, which would be higher than the fees paid by merchants, Linda Kirkpatrick, president of Mastercard in North America, said during the Senate Judiciary hearing.

In her testimony before the Senate committee, Kirkpatrick highlighted that value in the context of the past two years.

"Electronic payments kept commerce alive for consumers and small businesses during the pandemic," she said. "In fact, the US government used our products to quickly deliver critical aid to vulnerable Americans."

If the Durbin Amendment does get expanded to include credit cards, Ted Rossman, a senior industry analyst for CreditCards.com, said he would expect rewards to get slashed. But, he said, the prices merchants charge consumers might not ultimately fall.

"Retailers say they would lower prices if they paid less in card processing fees, but there's no evidence they did that after the Durbin Amendment, and I seriously doubt they would do it now," Rossman said.

If the fees aren't addressed, some businesses may try to respond by tacking on surcharges or not accepting credit cards, which then risks turning off customers, especially in an increasingly digital economy, Rossman said.