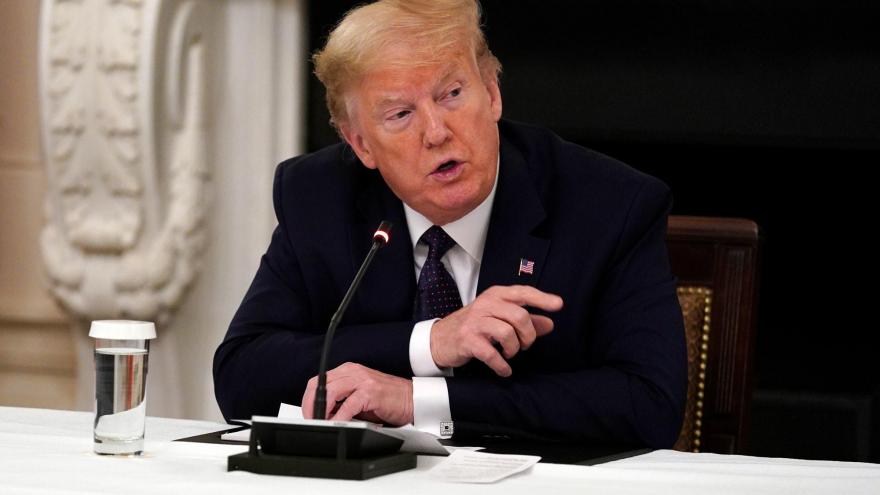 The restauranteurs, left financially reeling from the virus' impact on daily life, said they wanted an extension to the amount of time they could spend the loans granted through the Paycheck Protection Program -- from eight weeks to 24 weeks.

(CNN) -- President Donald Trump on Monday sought to downplay the coronavirus' ongoing impact on the food industry and projected economic optimism during a White House meeting with restaurant industry representatives.

The restauranteurs, left financially reeling from the virus' impact on daily life, said they wanted an extension to the amount of time they could spend the loans granted through the Paycheck Protection Program -- from eight weeks to 24 weeks. Under the existing rule, restaurants must rehire all of their employees within eight weeks for the loans to be forgiven.

But through the meeting, as restauranteurs pleaded for changes, Trump tried to convey his optimism about the industry.

Melvin Rodrigue, president and CEO of Galatoire's Restaurants, told the President that the industry will likely struggle to make a comeback and brought up the extension.

"Just the very nature of restaurants in general -- we rely on social interaction, so it makes us really unique that we were hit hard quickly and it's going to make our comeback really difficult. That being said, I'm glad to hear your news," Rodrigue told the President.

Trump responded: "Well, my news negates what you just said, because you would be back into business like you had it."

"No seats lost, et cetera, et cetera. So, we'll see what happens, but it certainly negates it," Trump added.

According to the National Restaurant Association's analysis, three decades of restaurant jobs were lost during March and April. And by mid-March, the association said some 3% of restaurant operators had closed permanently.

While reopening restaurants and bars may be the sign of returning economic activity, some owners have said that even if they can reopen, social distancing could put them out of business, because they won't be able to turn a profit when they reopen.

It wasn't the first time Trump has appeared to quash the concerns of Americans affected by the coronavirus. During another White House event earlier this month, Trump insisted there were no personal protective equipment shortages in the US, despite the president of the American Association of Nurse Practitioners saying in the Oval Office that availability could be "sporadic."

During Monday's event, Trump also projected optimism about what he perceived as the "first day" of reopenings across the country amid the coronavirus pandemic.

"It almost feels like today is the first day. I think last week didn't feel the same. Now, it feels good. People are starting to go out. They're opening," Trump said. "They get it. We understand the disease much better than we did when it first came in."

But the restaurant owners, chefs and CEOs continued to make their case for changes to the way federal recovery funding be doled out.

"We're not asking for more money. We're just asking for the opportunity to spend it the way it was intended," Tim Love, a Fort Worth-based celebrity chef, said during the meeting.

"That should be easy. That's one of the easiest requests I've ever heard," Trump responded.

Another request, Love said, was for flexibility on the amount of PPP loan funds being spent for rent.

The Democrat-majority House has passed more stimulus funding to deal with the ongoing economic of the coronavirus pandemic, but it's unclear what relief legislation GOP-controlled Senate will bring forward, if anything.

Trump has issued a veto threat against the House legislation, but the President has maintained optimism about further relief, including a payroll tax cut.

During Monday's meeting, restauranteurs at the table appeared to support the cut, but some suggested that the immediate need for changes to PPP superseded the need for the cut.

Tilman Fertitta, chairman and CEO, Landry's Inc., also requested a separate category for companies who don't qualify as small businesses and are therefore disqualified from obtaining a PPP loan.

Trump, who said Fertitta was a friend, asked Treasury Secretary Steve Mnuchin what he thought of the idea.

"He's got a unique situation. You know, he has a lot of restaurants. It's a big company ... what do you think?" Trump asked.

Mnuchin said it was "a complicated issue, and that while he was sympathetic, he added: "This was a program for companies that were not necessarily quite as big."