Restaurant workers and bartenders in need are getting 'adopted' through Facebook 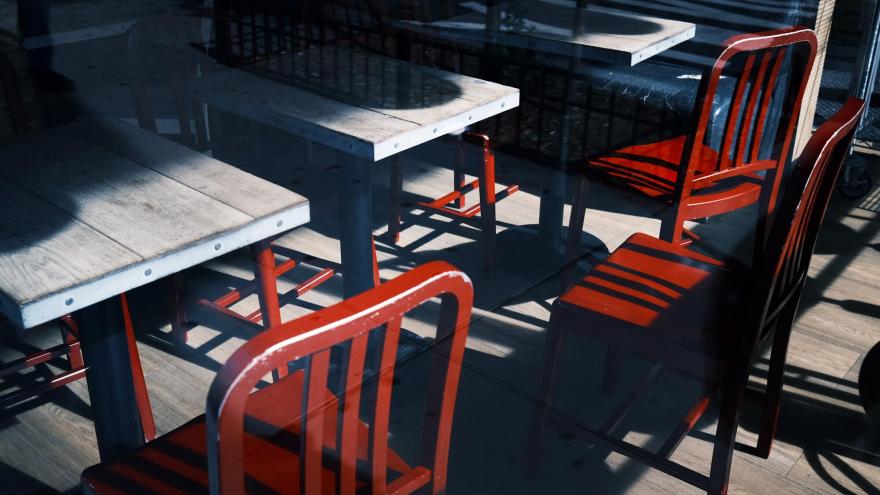 Restaurant workers and bartenders in need are getting 'adopted' through Facebook. Pictured here, a closed restaurant stands in New York City on October 15, 2020.

(CNN) -- The restaurant industry is among the hardest hit by the coronavirus pandemic. In communities across the US, people are "adopting" restaurant workers on social networks to help alleviate their hardships.

A search for "Adopt a Server" groups and pages on Facebook yields over 40 results across locations in the United States, from New Jersey to Kentucky, Missouri, California, Florida, and others.

In the Pittsburgh area, over 1,000 people have joined the "Adopt a Server/Bartender Allegheny County" group since it was created before Thanksgiving.

Erin Matuch, a 32-year-old living in Pittsburgh who worked as a server in her college years, created the group after reading about a similar initiative in a different state.

"I can't imagine what they're going through right now," Matuch told CNN.

Matuch runs her own business from home, selling screen-printed t-shirts, and uses Facebook to promote her activity. She decided to use her skills on the platform to launch the community and spread the word, after noticing there were no such groups in her area.

She approves each post in the group, giving tips to folks submitting requests for help on what information to share, as well as connecting helpers to people who need assistance. Most need cash, and help buying groceries and household supplies, Matuch said.

RELATED: Health care workers are being adopted by people who want to thank them for their sacrifices

Similar efforts have cropped up on social media to support other groups of people hit hard by the pandemic, from single moms to teachers, to health care workers.

"We've certainly seen people come together in groups to help others during the pandemic, particularly in local communities," Leonard Lam, a Facebook spokesperson, told CNN.

Helping in more ways than one

Matuch believes the group provides more than just a helping hand for those who need it: "It also helps them to know they aren't alone, there are others in the same boat, and it isn't their fault."

In Pennsylvania, where Matuch's group operates, a three-week ban on indoor dining went into effect on December 12 and was lifted on January 4. Currently, indoor dining is allowed at 50% or 25% reduced capacity, depending on restaurants self-certifying their adherence to relevant guidance on curbing the spread of Covid-19.

Tara Allen, a 39-year-old who worked as a cook, server and bartender at a bar in Meadville, two and a half hours north of Pittsburgh, told CNN she lost her job when the temporary ban went into effect.

"When the time came to come back I didn't get put back on the schedule," Allen said. During the pandemic, Allen lost two jobs, but this time she didn't qualify for unemployment insurance, she said.

She found relief in the Facebook group created by Matuch, with people helping her pay for her stay at a hotel and for household needs while she is in between apartments and starting a new job she was able to find, Allen explained.

Along with material support, the most important thing Allen said the group provided was "the feeling of safety, and that I'm not a burden either."

"Bumps in the road happen, and I've had a Pennsylvania pot-holed road," Allen said.

A crisis on top of a crisis

The magnitude of the crisis in the restaurant industry cannot be overstated, and it exposed an already vulnerable work force that relies on tips for a large portion of their income.

About 110,000 restaurants across the country, or 17% of the total are permanently closed or experiencing long-term closures, according to the National Restaurant Association. The group wrote to Congress last month to request they enact an industry-specific coronavirus relief package.

Just in the past month, employment in food services and drinking places declined by 372,000, according to data released on Friday by the Bureau of Labor Statistics (BLS).

Over 5.4 million jobs in food services and drinking places were lost between March and April 2020, the biggest monthly decrease over the course of the pandemic according to BLS data. While many of those jobs were restored, overall, since February 2020, over 2.4 million jobs in the industry were lost, BLS estimates.

"During the pandemic, workers were devastated," Saru Jayaraman told CNN. She is the president of One Fair Wage, a national nonprofit that advocates for tipped workers, and the director of UC Berkeley's Food Labor Research Center.

"Even prior to the pandemic, this was both the second largest and absolutely fastest growing work force of 13.6 million restaurant workers in the US, but has been the nation's absolute lowest paying workforce for decades," she said.

According to Jayaraman, 70% of tipped workers in America are women. "They're largely single mothers, women of color, really struggling to make ends meet before the pandemic because they earned a sub minimum wage and were reliant on tips."

As the federal minimum wage for tipped workers has stayed stagnant at $2.13 an hour since 1991, there are only seven US states that require employers to pay tipped workers the full state's minimum wage before tips. That's not the case in the other 43 states.

Among workers surveyed by One Fair Wage during the pandemic, many have reported they were unable to qualify for unemployment insurance because they didn't meet the minimum earnings threshold for it. Jayaraman explained that a lack of reporting of cash tips from workers and employers, especially in smaller businesses, contributes to this issue.

RELATED: These 20 states will raise their minimum wage by January 1

Food service workers surveyed by One Fair Wage have reported a decrease in tips by at least 50% since the beginning of the pandemic, an increase in hostile behavior from customers in response to staff enforcing coronavirus safety protocols, and an increase in unwanted sexual comments from customers, Jayaraman said.

"Mutual aid arises in these moments of depression and recession in America, but it's not going to cover it," she said, adding that a Democrat-controlled Senate should follow through and pass the Raise the Wage Act. The measure, which passed in the House in July 2019, would gradually increase the federal minimum wage to $15 by 2025, and repeal the sub minimum wage for tipped workers.

President-elect Joe Biden campaigned on the promise to raise the federal minimum wage to $15 per hour, and during a speech on Friday introducing members of his economics and jobs team, he expressed hope that Democratic control of the House and the Senate would "raise the odds of prompt action on increasing the minimum wage."

"No one should work as millions are doing today 40 hours a week at a job and still live below the poverty line," Biden said. "They're entitled to at least a $15 minimum wage per hour."