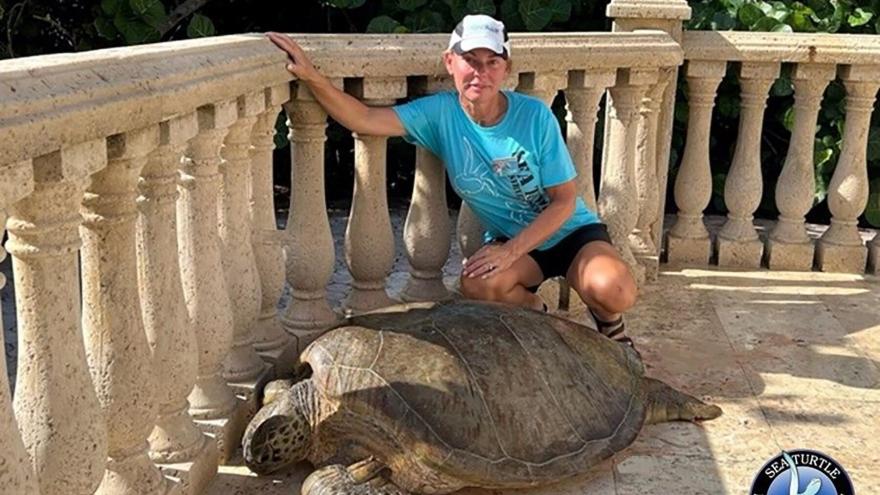 Rescuers heaved a massive sea turtle back into the ocean after it got stuck on a beachfront patio. Sea Turtle Preservation Society volunteer Cyndi Stinson kept the turtle cool with a little water.

(CNN) -- After a large green sea turtle wandered onto a beachfront patio in Florida, it needed a little help from local rescuers to find its way back to sea.

A resident in Melbourne Beach woke Tuesday morning to find the massive creature high and dry on their patio and Sea Turtle Preservation Society volunteer Cyndi Stinson was called in to help, the society said on Facebook.

The turtle was disoriented and couldn't figure out how to leave the patio, so Brevard County Fire Rescue personnel helped haul the turtle back to the water.

"After hours of being stuck on the patio the turtle made her way back to the ocean after being carried in a harness away from the home and over the dunes," the preservation society said.

The fire rescue team used equipment often deployed to transport heavy objects, the department said Tuesday. Eventually, the rescuers were able to deposit the turtle back onto the beach and it shuffled into the ocean.

The rescue mission came one day after Key West officers undertook a similar effort to save newly hatched baby turtles that had wandered to the deck of a local restaurant.

The Florida Fish and Wildlife Commission advises beachgoers who encounter sea turtles to stay out of their way because distractions could "frighten or disorient them," and people could potentially be disrupting a female turtle while nesting or pointing a hatchling away from the water. Lights -- which can include flashlights, flash photography and video equipment -- can also disrupt turtles' behavior, according to the agency.

"Summer is a busy time for Florida beaches with both people and sea turtles sharing the sand," the agency website reads. "Though turtle nesting and hatching usually happens in the middle of the night, it is very possible for humans to cross paths with nesting females or hatchlings on their way to the sea."