Rescued owl was 'too fat to fly' after bingeing on mice 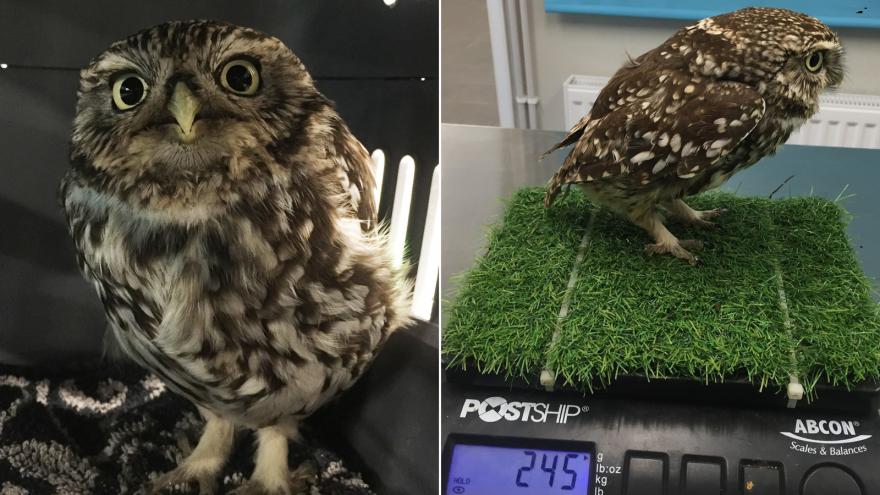 (CNN) -- Holiday overindulgence may not be an exclusively human weakness -- as a team of falconers discovered after rescuing an owl that was too fat to fly.

Suffolk Owl Sanctuary in eastern England was called to rescue the female "little owl," known scientifically as athene noctua, after a concerned passerby found it sodden in a ditch.

Head falconer Rufus Samkin told CNN that the team took in the owl on January 3.

At first they thought she had been injured or that her flying was impeded by the fact she was wet -- but even after drying off and getting a clean bill of health, the tubby avian still struggled to fly up to the perches in the aviary.

The team then considered whether the owl had been kept as a pet -- but it found "no evidence" of that being the case, as she refused foods commonly given to pet birds in favor of feed eaten by wild owls.

"It's quite relatable -- a plump owl that's overdone it," Samkin told CNN.

"We thoroughly examined it and found there was nothing wrong, other than it being extraordinarily overweight. It was very, very plump and very wet," he said.

"Owls do have an issue with waterproofing -- so if they do get wet they can't fly as well. But this one couldn't really fly at all," he added.

"It was about one third bigger than the average female we'd get -- so significantly larger."

In particular, the owl had lots of "fatty deposits" around its thighs and abdomen, he said.

"When we dug a little deeper and looked into where she was found we discovered the place was crawling with wild mice.

"It's been a really good year for prey species, so I think she's basically just massively overindulged, got really plump, and then got caught in a wet spell and was too fat to fly."

The Suffolk Owl Sanctuary kept the owl on a diet for two weeks to bring her back within a healthy weight range and on Monday released her back into the wild where she was found, Samkin said.

"She definitely needed to go on a diet," he added. "Hopefully she's learned a thing or two."