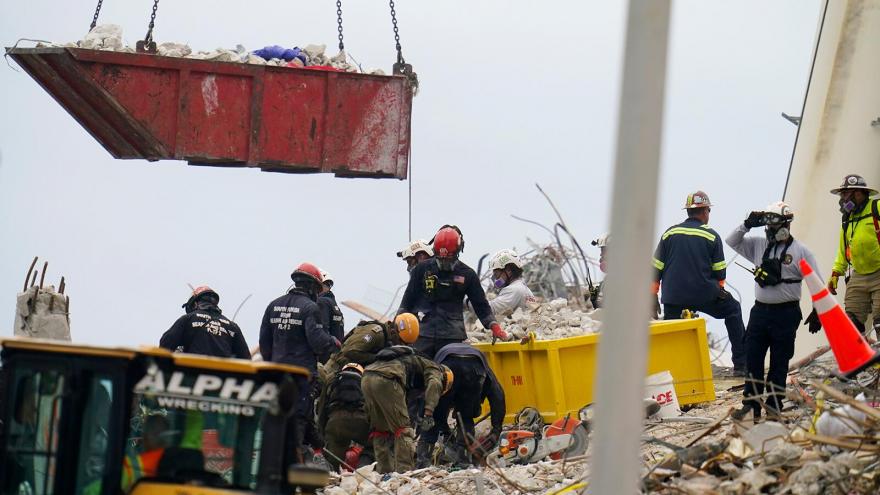 Rescue teams are entering their seventh day searching the rubble of a collapsed building in Surfside, Florida still holding out hope they will find the 149 people still unaccounted for.

"Any loss of life, especially given the unexpected, unprecedented nature of this event, is a tragedy," Levine Cava said. "But the loss of our children is too great to bear."

The number of victims recovered grew by six Wednesday. At a morning update, the mayor announced four bodies had been located.

A total of 145 people remain unaccounted for after 55 units of Champlain Towers South crashed to the ground in the middle of the night last Thursday.

As hundreds of rescuers -- some from overseas -- keep digging through the precarious mountain of rubble, some are trying to reconcile hope with realism.

"We must be realistic," said Col. Golan Vach, commander of the Israeli National Rescue Unit.

"Tomorrow will be one week. So until one week, I still hope."

The collapse happened while many residents were asleep, and Vach said crews have been looking for bedrooms buried under 13-16 feet of concrete.

"Most of the collapse is very, very tight. The collapse was major," Vach said.

Rain and thunderstorms arrived Wednesday and more are expected Thursday. There is a potential for strong winds and lightning.

But canine crews will not be hampered after stormy weather, Surfside Mayor Charles Burkett said.

He said two teams of dogs -- one searching for survivors, the other looking for victims -- are able to follow scents even after wind and rain.

Despite all the challenges of finding survivors, "I can tell you that none of us have lost hope," Miami-Dade Fire Rescue Capt. Eddy Alarcon said

He said searchers will keep "hammering away and cutting away in hopes that we can find somebody," he said. "We're always praying for somebody to be alive, but at the very least it gives some closure to the families waiting to hear from their loved ones."

A survivor says the garage collapsed

One survivor who fled with her family said the collapse may have started in the area of the pool deck and parking garage.

She went to talk to the security guard about the noise but was interrupted by a terrifying sound.

"There was a big boom, and I was running to see where the sound came from," Nir told CNN's John Berman.

"And I saw all the garage collapse. I couldn't believe it. I thought I (was) in a movie."

She was able to escape with her son and daughter. Two loud booming noises later, all they could see were white clouds of dust.

The cause of the collapse has not been confirmed. But early signs point to some failure in the lower reaches of the building, perhaps in its foundation, columns or underground parking garage.

One of the building's residents was talking to her husband by phone just before the collapse and said there was an issue in the the pool area, her sister told CNN.

A 2018 report, which Surfside has released among other public records, noted problems with the building's concrete.

"Abundant cracking and spalling of various degrees was observed in the concrete columns, beams and walls," the report said. "Several sizeable spalls were noted in both the topside of the entrance drive ramp and underside of the pool/entrance drive/planter slabs, which included instances with exposed, deteriorating rebar. Though some of this damage is minor, most of the concrete deterioration needs to be repaired in a timely fashion."

The waterproofing below the pool deck and entrance drive was failing and causing "major structural damage," according to the report.

The report didn't say the structure was at risk of collapse.

The community rallies together

More than $1.9 million has been raised to help those affected by the disaster, Mayor Burkett said.

Some of those donations made to SupportSurfside.org have already been distributed to at least a dozen families in need and a handful of nonprofits.

A tennis center near the building has been transformed as a respite for the first responders, and the walls are adorned with flowers and photos memorializing those killed or unaccounted for.

Cattarossi, her daughter, her parents and her sister have been reported missing.

"In September, I'm going to go back with the kids, but Stella and Grace are not going to be there," Hernandez told WSVN. "It makes my heart break."

Iliana Monteagudo, 64, woke up in the middle of the night Thursday to a strange sound. Then, she saw a crack snaking down her wall.

Barefoot, she ran from her sixth floor unit down the stairs, hearing thunderous noises and climbing over several walls as she raced toward safety, according to CNN affiliate WPLG.

Once outside, she called her son to say she was OK, but that the building behind her had collapsed.

Esther Gorfinkel, 88, was carried out of the building by neighbors as she headed slowly down the staircase.

When she told Albert Aguero, a man who carried her, that she lived a good 88 years and didn't need to be rescued, he told her "No, you're going to make it to your 89th birthday," Aguero told CNN affiliate WPLG.

"I saw the sky. I knew I will be safe," Gorfinkel said.

Because of the disaster, a building audit is underway across the county, and that audit has already uncovered serious issues, Mayor Levine Cava said.

"Our building officer notified one of those properties, a building in northeast Dade, that four balconies must be immediately closed to residents due to safety conditions," the mayor said Tuesday.

"We're taking swift action to immediately identify and address any outstanding issues with the buildings that have not yet completed their 40-year certification process -- that's our priority right now," she said.

Levine Cava said she expects all issues the audit turns up will be addressed in a matter of weeks.

Eliana Salzhauer, the commissioner of Surfside, said the condo association had a report about the building's condition, and she thinks they didn't do enough.

"In hindsight, they should have made more noise. They had this report, they had a report, it said very clearly, 'Your building is in bad shape,'" she said.

Donna DiMaggio Berger, an attorney for the condominium board, said she didn't think the building was in a state of disrepair prior to its collapse.

Allyn Kilsheimer, a structural engineer who has investigated the World Trade Center and the Oklahoma City bombing, has been hired by the city to investigate the collapse.

Engineers are looking to see what the "trigger event" was for the collapse, Kilsheimer said.

Kilsheimer said the investigation will take a long time as it looks into all possible scenarios.

More federal help is on the way

The incoming personnel include specialists to assist with the massive removal of debris.

The US Army Corps of Engineers is assisting with geotechnical, structural safety and debris removal experts to provide technical assistance.