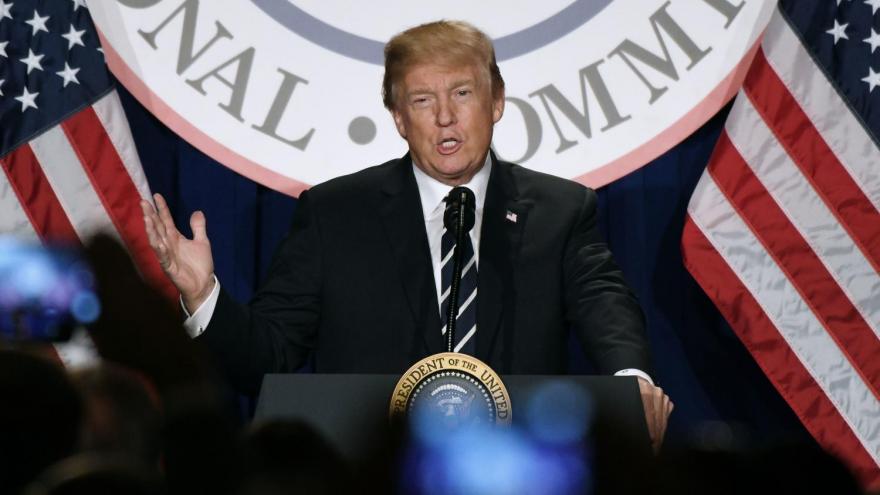 President Donald Trump speaks at the Republican National Committee winter meeting at the Trump International Hotel on February 1, 2018 in Washington, DC. The Republican National Committee executive committee unanimously approved a plan on Wednesday, June 10, to significantly scale down the convention proceedings that will take place in Charlotte later this summer and to make no changes to the party's 2016 platform, a party spokesman told CNN.

(CNN) -- The Republican National Committee executive committee unanimously approved a plan on Wednesday night to significantly scale down the convention proceedings that will take place in Charlotte later this summer and to make no changes to the party's 2016 platform, a party spokesman told CNN.

The rule changes come as Republicans -- angered by the fact that Democratic North Carolina Gov. Roy Cooper is not prepared to guarantee them a full-fledged convention due to the ongoing coronavirus -- search for an alternate convention location where state officials will allow President Donald Trump to accept the party's nomination before a large crowd.

The party is contractually obligated to keep some portion of the convention in the North Carolina city, but the vote on Wednesday night will substantially pare down the official business, with each state and territory only sending six delegates to the gathering, for a total of 336 delegates where there would have been over 2,500.

The party also extended their 2016 platform through 2020, meaning the platform that the party adopted four years ago will be unchanged for November's election.

"The RNC's Executive Committee has unanimously approved procedures that allow for official convention business to continue in Charlotte," said a committee spokesperson. "Many cities are eager to host the President's acceptance of the nomination, and talks are continuing with several of them to host that celebration. A final decision will be made soon."

The spokesman said the "acceptance session of the convention" -- the portion most commonly known as the celebration and acceptance speech -- will be in a different location and "all delegates and alternates will be permitted to attend, and each may bring a guest if permitted by law."

CNN reported on Wednesday morning that Republican officials are scrambling to find a new convention location as Trump pushed to scrap the Charlotte plan, with Jacksonville, Florida, being one of the leading contenders, according to two Republican officials close to the process.

Republican National Committee Chairwoman Ronna McDaniel said Wednesday that Jacksonville is "absolutely in the frontrunning position" to host the celebration for the Republican convention.

"We are going to keep our convention of, the business of the convention in Charlotte. That is for sure. It's going to be smaller and scaled down. And then we are looking for a different city for a celebration. There's a couple more things we need to do before we can announce that, but Jacksonville is absolutely in the frontrunning position," McDaniel said on The Hugh Hewitt Show.