Republicans have spent the year attacking Democrats on inflation. Some conservatives worry that won't be enough to win in November 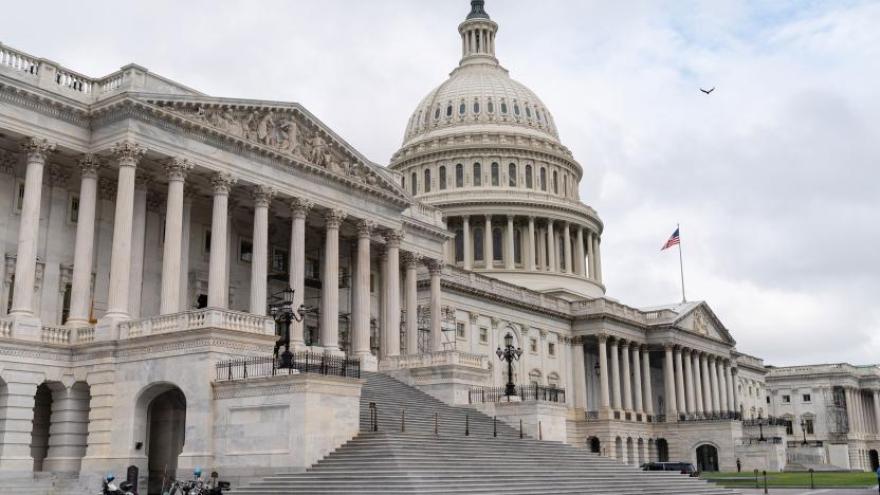 The US Capitol is pictured in Washington, DC, on September 7. Frustrated by Republicans' intense focus on inflation and President Joe Biden in the party's closing pitch to voters, some conservatives want to see the GOP talk more about hot-button cultural issues in the final sprint to Election Day.

(CNN) -- Frustrated by Republicans' intense focus on inflation and President Joe Biden in the party's closing pitch to voters, some conservatives want to see the GOP talk more about hot-button cultural issues in the final sprint to Election Day.

The thinking among critics of the current approach is that Democrats' most controversial positions are being ignored by Republicans at the expense of a messaging strategy that disproportionately focuses on pocketbook issues, like the economy, gas prices and taxes. And that as Republican candidates and the party's election apparatus shy away from more divisive issues -- including abortion rights, a topic that was injected into the midterm landscape after the Supreme Court overturned Roe v. Wade in June -- they are creating an automatic opening for Democrats.

"Abortion is proving to be a much more galvanizing issue for Democratic voters than inflation is for Republican voters," said Ryan Girdusky, a conservative commentator and campaign consultant. "The old Republican idea is that we'll win suburbanites because they care about pocketbook issues. But to try and galvanize them on the fact they're going to pay an extra quarter for bacon? They don't care."

One prominent Republican operative said that while economic issues can be motivating, they "ebb and flow and are less likely to galvanize people as consistently and intensely as those that have to do with safety and common sense." Republicans spent much of the summer talking about soaring gas prices, for example, hoping that pain at the pump would send voters their way this November -- but the national per-gallon average has consistently dropped since June.

A new Marist poll released Thursday found a 7-point drop since July in the proportion of Americans who cited inflation as their top voting issue this cycle (30%), though the issue remains the leading overall concern in the same survey.

Others pointed to abortion access becoming a motivating issue for Democratic and independent voters, claiming that Republicans -- many of whom have struggled to message around the issue since the Supreme Court ended federal abortion rights with its June decision -- shouldn't shy away from the issue while also trying try to capitalize on other cultural flashpoints. Last month, Kansas voters overwhelmingly rejected a proposed amendment to the state constitution that would have allowed state lawmakers to further restrict abortion access. The development energized many Democrats who have since turned abortion into a top campaign issue.

Among the issues that conservatives want to see GOP candidates weave into ads and stump speeches are gender identity, critical race theory, and criminal justice reform, all of which they consider liabilities for most Democrats.

"It is too narrowly focused and it's thoughtless if you think that the mom who is filling up her gas tank isn't the same mom who is caring about her kids' school and making sure that CRT (critical race theory) isn't part of her kids' curriculum. That mom is faced with both sets of issues, cultural and economic, and so elected officials need to meet voters where they're at," said Jessica Anderson, executive director of Heritage Action for America. Anderson said two "seasoned" Republicans fighting for reelection this cycle -- Florida Gov. Ron DeSantis and Wisconsin Sen. Ron Johnson -- should be a model for other GOP candidates on confronting a wide array of economic and social issues.

The tension between conservatives who want a deeper focus on cultural issues and Republicans who think economic woes are the dominant theme this cycle comes as the GOP grapples with infighting in other areas, too: the caliber of candidates in important Senate and gubernatorial contests, the way party bigwigs are choosing to spend money, and how closely campaigns should align themselves with former President Donald Trump -- particularly as he faces intense legal scrutiny over his keeping of classified records after leaving office.

"Go ahead and add this to the pile," said a GOP strategist who requested anonymity due to their involvement in several races this cycle. "Republicans can't agree on a message, we can't agree on where to invest [campaign cash], and instead of hashing these things out behind closed doors, we're bickering about it in public."

But some conservatives say the party's message is the most pressing problem because Republican candidates and outside groups are on the brink of starting to spend aggressively on advertising, and the content of those ads will need to send a jolt of energy through the party's base if the GOP wants to remain well-positioned to retake the House of Representatives and, potentially the Senate, this fall.

"Our closing pitch must be compelling enough to make Republicans want to vote. 'It's the economy stupid,' no longer fits into that category," said a Senate campaign aide, who requested anonymity to speak candidly.

For that reason, one conservative group has begun taking matters into its own hands.

The dark-money Citizens for Sanity has committed to spending millions of its own this cycle to deliver a counter-message, targeting voters on the internet and airwaves with warnings about so-called wokeness in education, business, and politics. The group has launched a series of provocative radio, television, billboard and newspaper ads that stand in stark contrast to Republicans' broader economy-themed message. A person familiar with the matter said the group has already spent seven figures this cycle between its advocacy efforts and advertising.

One of the group's recent ads, which has accumulated more than 2 million views on Twitter in less than one week, is a 90-second montage of gruesome local news reports and surveillance footage depicting incidents of violent crime across the country. The ad accuses "woke far-left politicians" of enabling an "assault on public safety," among other claims.

A separate ad launched Tuesday by the Senate Leadership Fund, a PAC affiliated with Senate Minority Leader Mitch McConnell, tackles the same issue with a more traditional approach, by using Pennsylvania Democratic Senate hopeful John Fetterman's own words to portray him as soft on crime. The 30-second spot featured two-year-old video footage of Fetterman discussing his efforts as chair of Pennsylvania's Board of Pardons to end automatic life-without-parole sentences for individuals convicted of second-degree murder.

"Our advertising on crime, in particular, is being done in races where it makes the most sense," said an SLF official, adding that, "generally speaking, economic concerns tend to be the top-rated issues."

Ian Prior, a strategic adviser for Citizens of Sanity, said the group wants to capitalize on what he described as a "major realignment" in the current political landscape. The group, which has already spent about $670k on advertising since August, according to AdImpact data, will launch a new $600k ad buy across Washington, Texas and Arizona this week focused on crime, "woke craziness," and gender ideology, Prior confirmed to CNN. The group is also "messaging aggressively" in Latino-dominated markets as Republicans try to maintain recent gains in Hispanic support, Prior added, and has previously launched ads in Texas, Arizona, New Mexico and Colorado around the participation of transgender athletes in male and female sports leagues.

"Latinos are fleeing the political left over its embrace of 'woke' policies -- an agenda created by and for wealthy white privileged coastal liberals," Prior claimed in a statement. (An earlier CNN analysis found a 5-point shift toward Republicans in generic ballot preference among Hispanics, though a recent Pew Research Center study found that 56 percent of Hispanics oppose the ending of federal abortion rights, which could negatively impact Hispanic support for the GOP come November).

So far, efforts to nudge Republican candidates and campaigns away from economic issues and toward cultural topics have occurred outside the party consensus.

By the end of July, Republicans had spent more than $40.6 million since the beginning of the year on TV ads that referred to inflation, according to the data firm AdImpact. Both privately and publicly, many GOP figures have also acknowledged that they consider inflation and kitchen table issues to be the most important to voters this cycle.

"Inflation is all that matters to the public... at the end of the day, people vote with their pocketbooks," said conservative radio host Erick Erickson on his podcast in mid-August.

The SLF official, who was not authorized to speak publicly, said the party's internal polling has repeatedly shown that inflation ranks the highest among voters' concerns, though there are instances where Republicans may need to offer a blended message that goes beyond inflation to focus on crime or immigration, too. The official said they had not seen evidence that wedge issues like gender ideology resonated deeply with broad swaths of voters.

"Inflation is cutting across most demographic and income groups. Everybody fills up their gas tank, everybody goes to the grocery store, and they are seeing these price increases affect their budgets in real time," said the official, adding that Republicans have "a buffet of messages" that could work to the party's advantage this cycle.

"There may be races where we talk almost exclusively about one or the other (inflation or crime and immigration) or we talk about both," the official said.

Even conservatives who have been nudging candidates to talk more about cultural issues said they should balance those messages with proposals to combat economic problems.

"My advice to candidates is to do both at the same time; draw the contrast with the left and run on a winning platform that actually shows voters what you care about," said Anderson. "Republicans, I think, have been doing this but they need to do it a lot more in the next 60 days."

A prebuttal to Biden's primetime speech by House Minority Leader Kevin McCarthy last Thursday, where the president slammed "extremist" MAGA Republicans and accused his predecessor of being a threat to democracy, could provide one roadmap to candidates, campaigns, and conservative outside groups as they look to reach both middle-of-the-road and grassroots Republicans in the closing weeks of the midterm race. While the California Republican, who is angling to become Speaker if the GOP wins control of the lower chamber, repeatedly criticized the current administration over gas and energy costs and littered his remarks with mentions of the economy, he accused Biden and Democrats of "dismantling American democracy" with their policies.

"Is it morally right that our children were forced to stay home from school while politicians dined out? When biological boys are allowed to compete in girls sports, does President Biden think that is fair?" McCarthy said while bemoaning "historic inflation" and "daily violence against innocent Americans" in the same breath.