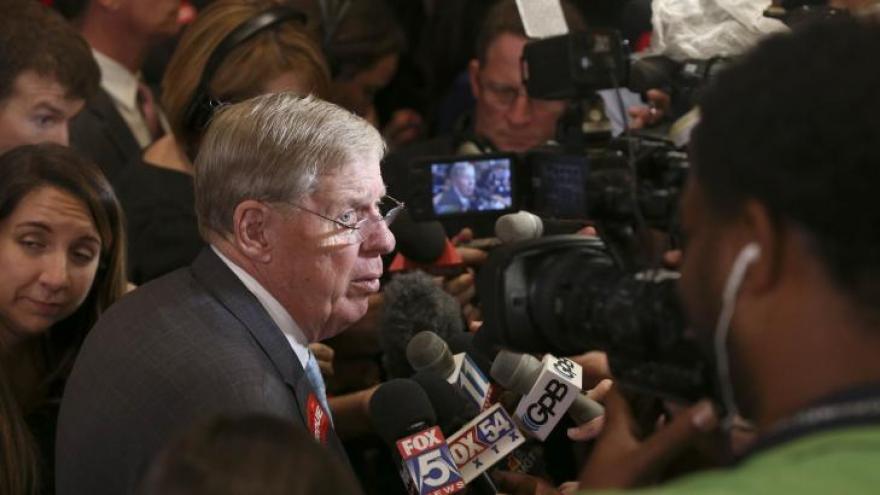 **This image is for use with this specific article only** Republican Sen. Johnny Isakson is planning to deliver a "whipping" against President Donald Trump on Wednesday in response to the President's recent attacks on the late Sen. John McCain, The Bulwark reported

(CNN) -- Sen. Johnny Isakson said President Donald Trump's criticism of the late Sen. John McCain is "deplorable," and the Georgia Republican promised to continue speaking out against Trump if he continues to speak ill of the deceased war hero and former GOP presidential nominee.

"It's deplorable what he said," Isakson told Georgia Public Broadcasting on Wednesday afternoon when asked about a series of critical comments Trump has made about McCain. "That's what I said on the floor of the Senate seven months ago. It will be deplorable seven months from now if he says it again and I will continue to speak out."

Isakson continued "There aren't Democratic causalities and Republican casualties on the battlefield, there are American casualties. And we should never reduce the service that people give to this country including the offering of their own lives to any political fodder in Washington, DC, or anywhere else for that matter."

In the wake of McCain's death last year, Isakson gave a Senate speech at the time that said "anybody who in any way tarnishes the reputation of John McCain deserves a whipping because most of those who would do the wrong thing about John McCain didn't have the guts to do the right thing when it was their turn."

Isakson told the station Wednesday, "we can't talk about our veterans in any way but to thank them for the service they render for the job that they do."

"If my kids started talking John McCain not being a hero, or because he was a prisoner of war didn't make any difference, they would have a serious conversation with me and I would have it with them," Isakson continued.

Isakson previewed his comments Wednesday in remarks to The Bulwark, where said in an interview Tuesday that "I want to do what I said that day on the floor of the Senate."

"I just want to lay it on the line, that the country deserves better, the McCain family deserves better, I don't care if he's President of United States, owns all the real estate in New York, or is building the greatest immigration system in the world. Nothing is more important than the integrity of the country and those who fought and risked their lives for all of us," Isakson told the news outlet from the conservative Defending Democracy Together Institute.

Isakson has previously made clear his reluctance to criticize Trump.

"I'm not going to answer the question the way it was phrased Because the (headline) would be, 'Isakson supports rebuking the President,' and I'm not going to do that," Isakson said last week ahead of Senate votes aimed at rebuking the President. "Any way that I answer your questions is going to engage me in that line of thinking and I don't want to be on either side of it. I want us to get the job done for the people we represent and not fool around with a bunch of political fights that make good headlines but don't make any good policies."

Last weekend, Trump attacked the late senator in several tweets that targeted McCain's ties to the controversial Russia dossier and his vote against repealing Obamacare. He also referred to McCain as being "last in his class" at the US Naval Academy.

On Tuesday, he continued his criticism of McCain, telling reporters at the White House that "I was never a fan of John McCain and I never will be."

Isakson told The Bulwark that the President's comments "drive me crazy" and that "nobody — regardless of their position — is above common decency and respect for people that risk their life for your life."