Republican governors are refusing aid from Democrats in Washington 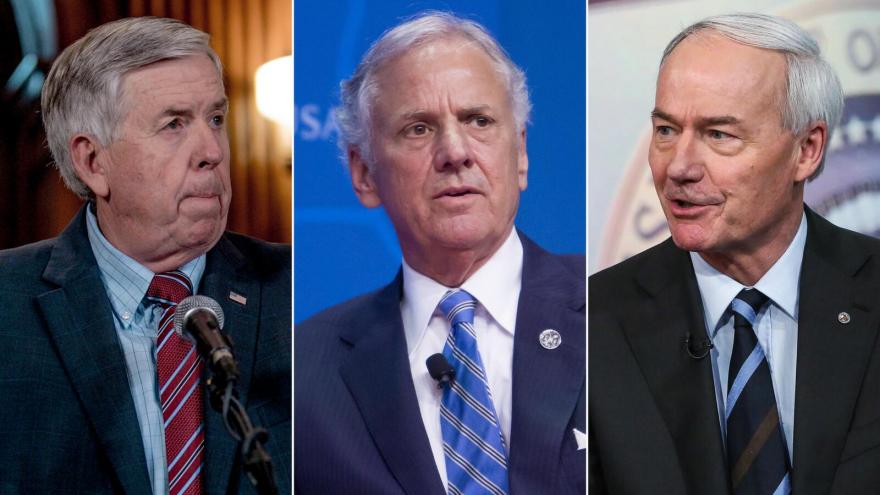 (CNN) -- Democrats in Washington have approved trillions of dollars to help Americans weather the coronavirus pandemic, but Republican state officials are pulling back relief for low-income Americans by turning away federal money.

In little more than a week, 17 governors have announced they'll be cutting off pandemic unemployment benefits early, the latest being West Virginia on Friday. This could cost nearly 2 million people as much as $10.8 billion in payments, according to a recent analysis by The Century Foundation.

The moves echo the refusal by GOP-led states to participate in Medicaid expansion under the Obama-era Affordable Care Act -- a resistance that persists, as Missouri's Gov. Mike Parson said Thursday that his state would not implement a voter-approved Medicaid expansion on July 1 for budget reasons.

He and other Republican officials in the dozen red-led states that have yet to expand Medicaid aren't stepping up to take advantage of a big sweetener that Democrats included in their recent $1.9 trillion relief package. Those states that broaden Medicaid will receive a 5-percentage-point boost in their federal matching funds for two years.

While Republicans in Washington focus on ridding the party of leaders perceived as disloyal to former President Donald Trump -- this week ousting Wyoming Rep. Liz Cheney from the House leadership -- GOP governors are leaning into the longstanding party orthodoxy of advocating for paychecks instead of government handouts.

Are you at risk of losing your benefits early? Tell us about it here.

States aren't on the hook to pay the billions of dollars of benefits to millions of their residents -- Congress made sure that the federal government would pick up the tab when it passed its historic expansion of the nation's unemployment benefits system in March 2020. But the governors who are terminating the programs say that the more generous payments -- including the $300 weekly federal boost to state benefits -- are keeping workers on the sidelines and hurting businesses' ability to fully reopen.

"As we emerge from Covid-19, retail and service companies, restaurants and industry are attempting to return to pre-pandemic unemployment levels, but employees are as scarce today as jobs were a year ago," said Arkansas Gov. Asa Hutchinson, a Republican, who announced his state would cease the federal benefits on June 26.

Republican governors in Alabama, Arizona, Arkansas Georgia, Idaho, Iowa, Mississippi, Missouri, Montana, North Dakota, Ohio, South Carolina, South Dakota, Tennessee, Utah and Wyoming have announced they are terminating the federal jobless benefits in their states in June or July, including the $300 weekly boost and the payments for freelancers, independent contractors, certain people affected by the virus and those who've run out of their regular state benefits. All cited labor shortages.

Many also said the time for the bigger federal coronavirus cushion had passed, now that more Americans are vaccinated and case counts are declining.

"What was intended to be a short-term financial assistance for the vulnerable and displaced during the height of the pandemic has turned into a dangerous federal entitlement, incentivizing and paying workers to stay at home rather than encouraging them to return to the workplace," said South Carolina Gov. Henry McMaster, who announced last week that the programs would end on June 30 in his state.

Democrats, who recently extended the expansion until early September as part of their $1.9 million coronavirus relief package, defend the continued need for enhanced benefits, pointing to the fact that the nation still has 8 million fewer jobs than it did before the pandemic. Also, they say, many people can't return to work because of child care issues or health concerns.

More than 300 people responded to CNN's request asking whether they are at risk of losing their benefits early. Some said that they could not find jobs that pay close to what they used to make or that are in their fields. Others said the available positions require licenses and training that they don't have. And still others said they were still caring for their young children or have vulnerable family members at home.