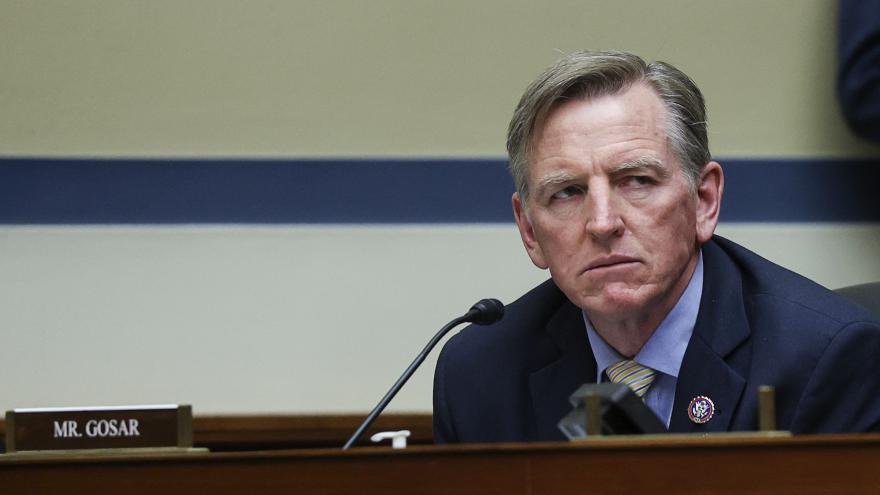 Ocasio-Cortez tweeted in response Monday saying a "creepy member" of the House had "shared a fantasy video of him killing me."

"And he'll face no consequences bc @GOPLeader cheers him on with excuses," the New York Democrat added.

As part of the initial tweet, Gosar asked, "Any anime fans out there?"

He also shared a link to the video.

Gosar is portrayed as a cartoon anime-type hero and is seen attacking a giant with Ocasio-Cortez' face with a sword from behind. The giant can then be seen crumbling to the ground.

Another scene shows Gosar flying through the air, swinging two swords at a character with President Biden's face.

Gosar did not respond to CNN's request for comment seeking an explanation for the video and its meaning.

Gosar's digital director, Jessica Lycos, said in a statement to The Washington Post on Monday night, "Everyone needs to relax."

Gosar tweeted a similar sentiment on Tuesday morning, using another meme that included the phrase, "It's a cartoon. Relax."

Calls to House Minority Leader Kevin McCarthy have also not been returned.

"Threats of violence against Members of Congress and the President of the United States must not be tolerated. @GOPLeader should join in condemning this horrific video and call on the Ethics Committee and law enforcement to investigate," Pelosi tweeted Tuesday.

In a news release, four Democrats who co-chair the House Democratic Policy and Communications Committee, wrote, "In any other job in America, if a coworker made a video killing another coworker, that person would be fired."

The Democrats called on McCarthy to take action, writing "Mr. McCarthy needs to decide whether he will finally stand with the American people on the side of law and order or he will continue to support violence and chaos." The co-chairs include Democratic Reps. Matt Cartwright of Pennsylvania, Debbie Dingell of Michigan, Ted Lieu of California and Joe Neguse of Colorado.

Twitter said Monday evening that the video violated its rules on "hateful conduct" but did not remove the video, instead affixing a label to it that reads, "Twitter has determined that it may be in the public's interest for the Tweet to remain accessible."

In a section explaining why the video was labeled that way, Instagram explains, "This post doesn't go against our community standards, but may contain images that some people might find upsetting."

The company did not respond to CNN's request for comment Monday night.

White House deputy press secretary Karine Jean-Pierre told reporters on Tuesday that "there is absolutely no place for of any kind of -- no place for any violence of any sort in this political system," but she did not weigh in on how social media companies should go about moderating that type of content.

"I don't want to go any further than that. I leave it to the social media platform on how they're gonna move forward on that. But there is no place for any type of violence or that type of language in the political system and it should not be happening and we should be condemning it," she said at a White House press briefing.

Gosar, a Republican congressman from Arizona, voted against certifying the election for Biden, and has said that Ashli Babbitt, who was shot at the capitol on January 6 had been "executed" and that "(t)he Capitol Police officer that did that shooting appeared to be hiding, lying in wait and then gave no warning before killing her."

Several law enforcement agencies including the Justice Department have cleared that officer of any wrong doing in the shooting.