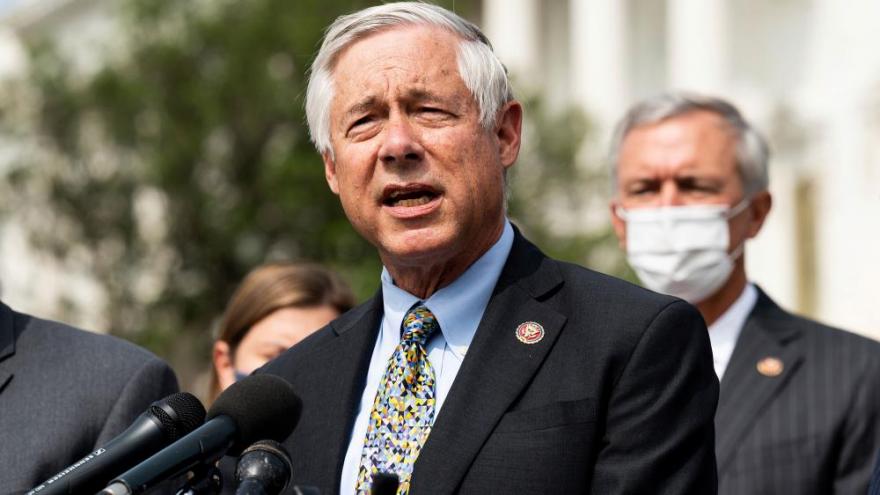 Republican Rep. Fred Upton called out an effort by some of his GOP colleagues to downplay the Capitol insurrection.

(CNN) -- Republican Rep. Fred Upton on Sunday called out an effort by some of his GOP colleagues to downplay the Capitol insurrection, saying their "bogus" claims about the deadly attack are evidence of a need to establish a bipartisan commission to investigate the incident.

"It's absolutely bogus. You know, I was there. I watched a number of the folks walk down to the White House and then back. I have a balcony on my office. So I saw them go down. I heard the noise -- the flash bangs, I smelled some of the gas as it moved my way," the Michigan congressman told CNN's Dana Bash on "State of the Union" when asked about comments made by several congressional Republicans last week who attempted to re-write what happened on January 6.

The comments from the longtime congressman come as a rift in his party grows between members who are offering an inaccurate account of the insurrection and those who have consistently condemned the violence on January 6 while also casting blame on former President Donald Trump and his 2020 election lies for the attack. Upton was among the 10 House Republicans who voted to impeach Trump for his role in inciting the riot.

Among the claims made last week was one by Rep. Andrew Clyde, a Republican from Georgia, who falsely compared the riot to a tourist visit, saying during a hearing on the attack that "there was no insurrection and to call it an insurrection, in my opinion, is a bald-faced lie."

Upton told Bash he wasn't sure what was motivating his colleagues to make such claims, but that those statements stand as a reason why he supports a bipartisan commission to investigate the attack. Lawmakers on Friday cleared a hurdle on Friday in creating a bipartisan commission after the top Democrat and Republican on the House Homeland Security Committee struck a deal on how to structure the independent panel.

"Get the facts out, try to assure the American public this is what happened, and let the facts lead us to the conclusion," Upton said.

After the agreement was announced Friday, it was not clear whether House GOP Leader Kevin McCarthy -- who has been fighting with House Speaker Nancy Pelosi over the commission proposal -- would sign off on the deal, as he said he was still reviewing it. Upton said in his interview that he hopes the California Republican will support the proposal.

Going a step further on Sunday, Wyoming Rep. Liz Cheney, who was ousted from her post in GOP leadership last week for challenging Trump's election lies, told ABC News that McCarthy should "absolutely" testify before the commission should lawmakers establish the investigatory body.

"I would anticipate that -- I would hope he doesn't require a subpoena, but I wouldn't be surprised if he were subpoenaed," Cheney said of McCarthy, adding later that the attempts by some of her colleagues to downplay the insurrection are "disgraceful and despicable."

House Homeland Security Chairman Bennie Thompson, who helped lead negotiations to reach a deal on the bipartisan commission, told CNN's Jim Acosta on Sunday it's important to find out what McCarthy knows about Trump's actions on January 6.

"We have to get all of the facts. I hope we should not have to end up subpoenaing individuals to come. We want to get the House Administration documents. We want to get the Government Reform and Oversight Committee's documents, the Department of Defense documents and any witness who had anything in terms of knowledge of what happened on January 6. The commission needs to hear from them," the Mississippi Democrat said.

Asked if that includes Trump, Thompson said the commission would also "need to get" information from the former President himself.

"He invited many of the people who broke into the Capitol to Washington on that day. He said, 'Come to Washington. It's going to be wild.' So we need to get from him what 'coming to Washington, being wild' was all about."

The proposed commission would include a 10-member panel, with half appointed by Democratic congressional leaders, including the chair, and half by Republicans, including the vice chair. The panel will have the power to issue subpoenas if they are signed off by both the chair and vice chair, according to a summary released by the committee. The commission would be tasked with issuing a final report by the end of this year, making it a quick timeline for the panel to put out a final product.

CORRECTION: A previous version of this story misquoted Rep. Andrew Clyde's comments about the insurrection.