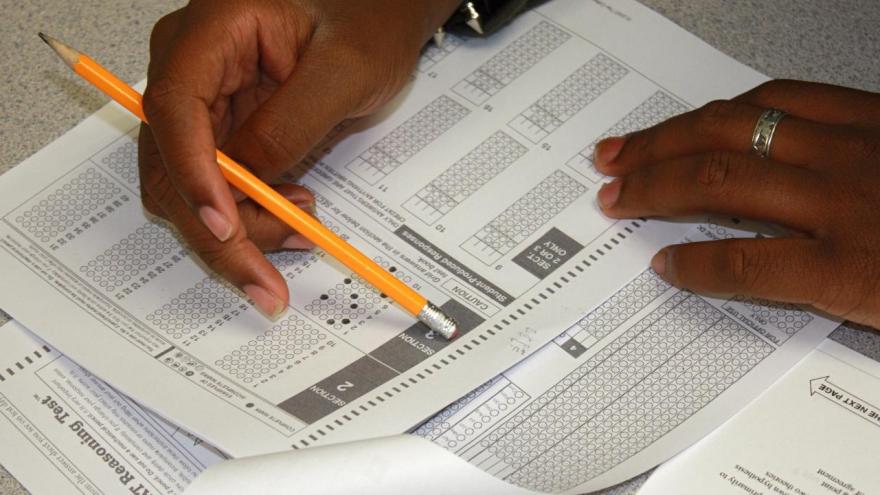 The nonprofit group that administers the SAT will assign an adversity score to each student who takes the test to reflect their social and economic backgrounds, according to a report from the Wall Street Journal.

(CNN) -- The nonprofit group that administers the SAT said Thursday it will assign a score to students who take the test to reflect their social and economic backgrounds.

The new score -- first reported by the Wall Street Journal -- comes amid heightened scrutiny that colleges are facing over the admissions process and the diversity of their student bodies.

The College Board said it would implement what it calls the "Environmental Context Dashboard," which would measure factors like the crime rate and poverty levels of a student's neighborhood, to better capture their "resourcefulness to overcome challenges and achieve more with less."

"There is talent and potential waiting to be discovered in every community -- the children of poor rural families, kids navigating the challenges of life in the inner city, and military dependents who face the daily difficulties of low income and frequent deployments as part of their family's service to our country," David Coleman, chief executive officer of the College Board said in a statement sent to CNN.

"No single test score should ever be examined without paying attention to this critical context," he added.

The Environmental Context Dashboard has been piloted at 50 colleges and universities, according to a spokesman for the College Board, and the organization hopes to make it more widely available to other schools next year.

Students are scored on a scale of 1 to 100 based on data from records like the US census and the National Center for Education Statistics. According to the College Board, a score of 50 would be considered average, while a number above 50 indicates more hardship.

The score takes into account information from the student's background, but it does not include race.

Instead, it focuses on factors like their high school's average senior class size, percentage of students eligible for free and reduce lunches and academic achievement in Advanced Placement classes.

A student's environment at home and in his or her neighborhood, like the crime level, the median family income and family stability, will be factors as well.

Colleges will be able to see the number when considering applicants, but students themselves won't be told their scores.

The news comes against the backdrop of a bombshell college admissions scandal, which saw a slew of indictments against wealthy and powerful parents who allegedly paid their kids' ways into elite universities. The scandal reignited the debate surrounding race and economic backgrounds and what role they play in college admissions.

Some parents were found to have paid bribes to have the SAT taken by others for their children. Not all the students were aware of the cheating arranged by their parents, according to the criminal affidavit in the case. No students currently face charges in the scandal.

A lawsuit against Harvard University also has accused the school of discriminating against Asian-American applicants by giving them low "personal" ratings that take into account traits such as leadership and likability -- which lessen their chance of admission -- while giving higher ratings to African-American and Hispanic students.

Harvard has denied there is any evidence of stereotyping. A judge has yet to make a ruling in the case.

Yale University was one of the schools that tried using the adversity scores as it worked to increase socioeconomic diversity on its campus.

Jeremiah Quinlan, the school's dean of undergraduate admissions, told the Wall Street Journal that Yale has nearly doubled the number of low-income students and those who are first in their families to attend college to about 20% of new students.

"This (adversity score) is literally affecting every application we look at," Quinlan told the Journal. "It has been a part of the success story to help diversify our freshman class."