Rep. Pramila Jayapal: $1.5 trillion for economic bill is 'too small' and 'not going to happen' 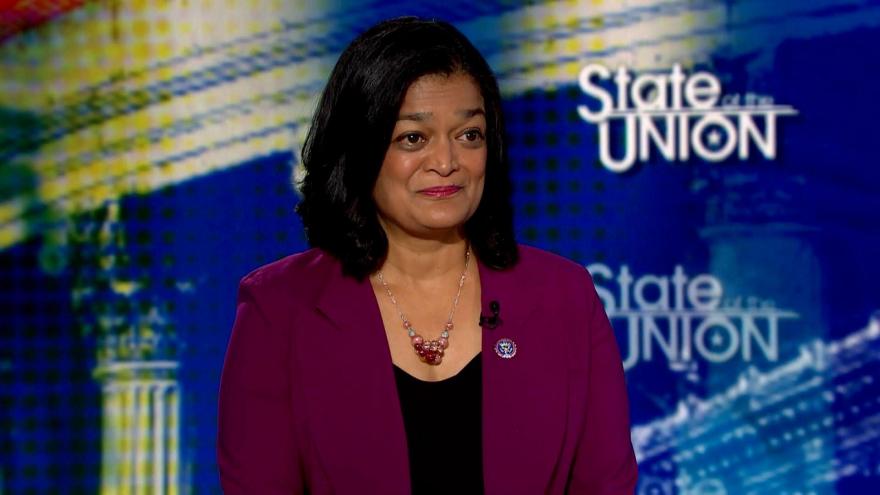 House Progressive Caucus Chair Pramila Jayapal said October 3 that the $1.5 trillion figure for the economic bill was "too small," but wouldn't say whether she would accept the $2.1 trillion dollar price tag that is being floated.

(CNN) -- House Progressive Caucus Chair Pramila Jayapal said Sunday that the $1.5 trillion figure for the economic bill was "too small," but wouldn't say whether she would accept the $2.1 trillion dollar price tag that is being floated.

"That's not going to happen," Jayapal told CNN's Dana Bash on "State of the Union" when pressed on the $1.5 trillion number. "That's too small to get our priorities in. It's going to be somewhere between 1.5 and 3.5, and I think the White House is working on that right now because, remember, what we want to deliver is childcare, paid leave and climate change, housing."

The Washington state Democrat's comments come as negotiations over the bill continue after House Speaker Nancy Pelosi delayed bringing the $1 trillion infrastructure bill to the floor for a vote late last week. Progressives threatened to withhold support for the bill until details are ironed out for the separate massive social benefits and climate spending bill.

The move has frustrated moderate Democrats, including Arizona Sen. Kyrsten Sinema, who slammed the delay on the vote as "inexcusable and deeply disappointing for communities across our country." New Jersey Rep. Josh Gottheimer also criticized the delay and called it "deeply regrettable."

A document circulated this week, dated July, revealed that West Virginia Sen. Joe Manchin laid out what he wanted to see in the economic bill, including a topline around $1.5 trillion and added he did not want to begin debate until October 1. He also told Bash in a previous interview he wanted between $1 trillion and 1.5 trillion for the legislation. On Thursday, Manchin made clear that $1.5 trillion was the price tag he was willing to settle on.

White House adviser Cedric Richmond said Sunday there is no time frame on reaching a deal and ultimately passing both sides of Biden's economic agenda, arguing that the top number price tag for the social safety next expansion package isn't as important as what programs are created because of it.

"We don't have a time frame on it. This is just about delivering and making sure that we deliver both bills to the American people because it meets their needs. So, we're not using an artificial timeline, and we're not concerned with process. We're concerned about delivering," Richmond told Chris Wallace on "Fox News Sunday."

'Concessions will be made'

Some elements included in the bill include universal pre-K, free tuition for community college, adding benefits for Medicare and climate provisions, and child tax credits that Jayapal told Bash is a priority for progressives. Asked what nonnegotiable issues should be in the bill for a 10-year period, Jayapal told Bash clean electricity standards need to be included.

"I think that the clean electricity standards really do need to be in there for a 10-year period because it takes time to cut carbon emissions and we need to have that certainty in order for the market to move in that direction," she said.

Jayapal also said when it comes to including Manchin's proposal for means testing -- making sure people who can afford to pay for the benefits won't receive them in the economic bill -- she said, "it's not what I want to do," but noted the negotiations were just beginning.

Senate Majority Whip Dick Durbin said Sunday he supports the $3.5 trillion price tag but also would not say what the ultimate price tag of the bill would be, adding that he wanted the "most effective number to help families and this economy move forward in a responsible way."

"Every vote counts when it comes to getting to this majority. And concessions will be made. And we're certain of that," Durbin told Bash in a separate interview.

This story has been updated with additional interviews and information.