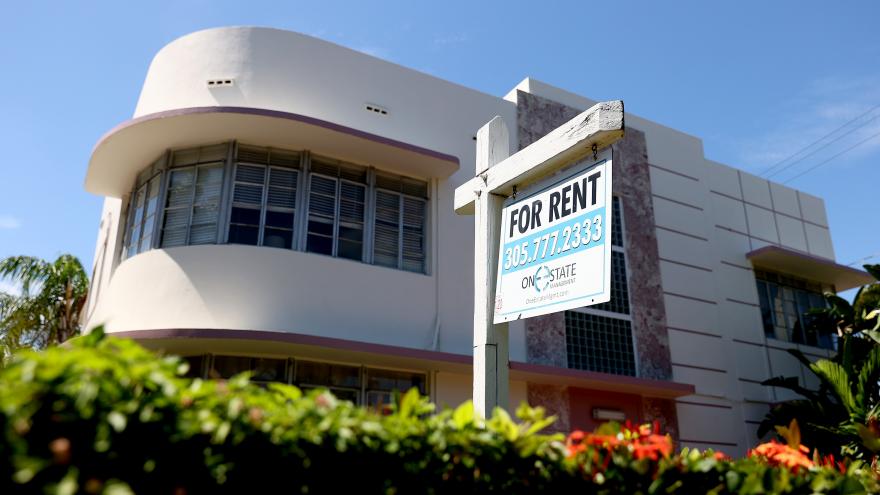 (CNN) -- The cost of monthly rent reached a new high in February, with the typical apartment now $283 more expensive each monththan it was two years ago, before the onset of the pandemic.

The national median rent was $1,792 last month, up 17% from a year ago, according to a report from Realtor.com. Rent for studio apartments, one bedrooms and two bedrooms all saw double-digit increases over the past year.

February marked the seventh-straight month of rents soaring by double-digit percentages, after rents cratered in some of the biggest cities during the pandemic.

"With rents up by nearly 20% over the past two years, rental prices are likely to remain high, but we do expect some cooling from the recent accelerated pace," said Danielle Hale, chief economist at Realtor.com.

In some cities, the rent increases have been staggering. Miami saw the fastest growth, with the median rental price spiking 55% in February from a year ago, making it the least affordable market of the top 50 cities, according to the report.

Cities that saw the smallest rent increases were Cleveland, Minneapolis and Detroit, where rents were up by just 6% or less in February from a year ago.

San Jose, California, remains the most expensive place to rent, with a median rent of $3,024 a month, followed by San Diego, Los Angeles, San Francisco, Miami and New York City.

"With rents surging nationwide, February data indicates that many renters' budgets may be stretched beyond the affordability limit," said Hale.

The Sun Belt continues to attract new residents drawn by its relative affordability, attractive lifestyle and an increased ability to work remotely. As a result, all 10 of the fastest-growing rental markets are in the southern tier of the US, including four in Florida.

Rent growth is being driven up by an increase in demand, particularly from young renters, many of whom may have been priced out of buying a home, according to the report.

Although buying a starter home is more affordable than renting one in a city like Miami, the report showed, home prices there are rising andmortgage rates are climbing, with purchase prices up 31.6% in February from a year ago.

"In light of mounting economic uncertainties and the conflict in Ukraine, some households will prefer to buy, in an effort to lock in a largely fixed monthly payment as a hedge against further inflation," said Hale. "But fast-rising mortgage rates and still-limited numbers of homes for sale could mean some would-be buyers may stick with the flexibility of renting. With rental demand already outmatching supply, rental affordability will remain a challenge."

A general rule of thumb is to keep monthly housing costs at 30% or less of monthly income. But even if wages are rising in some industries, rents are up a lot more -- and taking up a larger share of monthly income.

Sun Belt cities experiencing strong inbound migration are some of the least affordable places to rent, based on a Realtor.com analysis.

As the least affordable city to rent, Miami's median rent is $2,929 a month, which takes up nearly 60% of the median monthly income, making renters there heavily cost burdened.