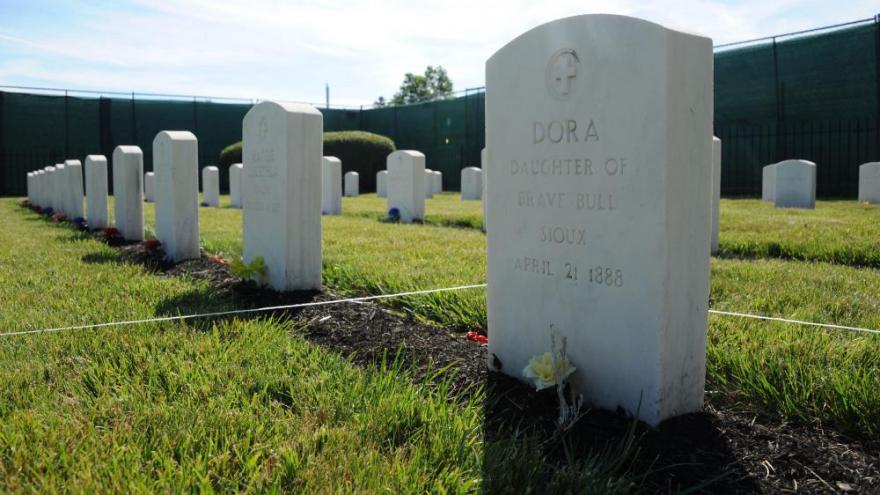 The remains of 10 children and young adults who died at a Pennsylvania boarding school for Native Americans more than a century ago are expected to be exhumed and returned to their families, according to the Office of Army Cemeteries.

(CNN) -- The remains of 10 children and young adults who died at a Pennsylvania boarding school for Native Americans more than a century ago are expected to be exhumed and returned to their families, according to the Office of Army Cemeteries.

The Carlisle Indian Industrial School was the first off-reservation boarding school for Native American children, and was built on the abandoned Carlisle Barracks, according to the National Museum of the American Indian and the U.S. Army War College. The college now occupies the site.

The disinterment comes after the remains of at least 215 children were found buried near a residential school for Indigenous children in Canada.

On Tuesday, Secretary of the Interior Deb Haaland announced the Federal Indian Boarding School Initiative, which will investigate the United States' legacy of placing Native American children in boarding schools.

The children and young adults were already known to be buried at the school, their deaths marked on their student information cards, according to documents digitized by the Carlisle Indian School Digital Resource Center.

The exhumation is the US Army's fourth disinterment project at Carlisle Barracks, after the Army moved human remains to the post's cemetery from the school's in 1927.

The deceased are among more than 10,000 students, spanning about 50 tribes, who were brought from across the United States to the school until it closed in 1918.

Nine of the children and young adults were from the Rosebud Sioux Tribe in South Dakota. The 10th child, Sophia Tetoff, was an Aleut girl from Alaska, according to the OAC.

The Rosebud Sioux Tribal Council and the Aleutian Pribilof Islands Association did not immediately respond to requests for comment.

A history of abuse

The founder of the Carlisle Indian Industrial School, Capt. Richard Pratt, believed that Native children should be stripped of their Indigenous culture and assimilated into White American culture. Pratt's most famous speech included his notorious urging to "kill the Indian" to "save the man."

Boarding schools for Native American children were known for physical and sexual abuse, as well as isolating children from their native cultures.

"Students were forced to cut their hair, change their names, stop speaking their Native languages, convert to Christianity, and endure harsh discipline including corporal punishment and solitary confinement. This approach was ultimately used by hundreds of other Native American boarding schools," according to the Carlisle Indian School Project, a non-profit that aims to commemorate the site with a museum.

"The Army's commitment remains steadfast to these nine Native American families and one Alaskan Native family. Our objective is to reunite the families with their children in a manner of utmost dignity and respect," said Army National Military Cemeteries Executive Director Karen Durham-Aguilera in a statement to CNN.

In 2000, Kevin Govir, the assistant secretary for Indian Affairs apologized for the "ethnic cleansing and cultural annihilation" conducted by the agency. Gover specifically cited government boarding schools as part of a "cultural assault on American Indians and Alaska Natives."

The 2010 Defense Act included a clause where Congress apologized "on behalf of the people of the United States to all native peoples for the many instances of violence, maltreatment, and neglect," though Native people at the time noted that President Barack Obama did not draw attention to it or officially apologize himself.

The Carlisle Barracks Post Cemetery will be closed while the Office of Army Cemeteries will conduct the disinterment from mid-June until an expected end date of July 18. The Army will pay for the return of the deceased to closest living relatives, and the reinterment of the remains.