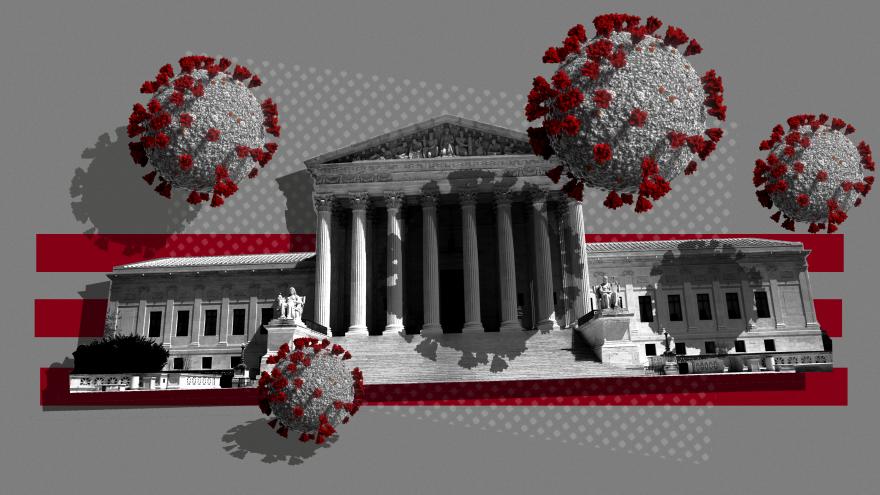 (CNN) -- The spread of the Delta variant has rekindled a debate that raged in the Supreme Court last term as houses of worship charged that state Covid-related restrictions were violating their religious liberty rights.

By and large, the justices ruled against the states and set fresh precedent in a series of emergency orders issued without the benefit of regular briefs or oral arguments. Now, groups that won in the first round of lawsuits hope the stern warnings from the conservative majority last term will influence states as they consider new restrictions, including possible vaccine mandates.

"If any governments try to go down the path of closing worship again, this time around we have the benefit of the Supreme Court's numerous rulings making clear that worship is not just important, but essential," Eric Rassbach, vice president of the Becket Fund for Religious Liberty, told CNN.

Jim Oleske, a professor at Lewis & Clark Law School, expects the courts to be busy.

"The Delta wave is likely to prompt a whole new round of litigation, with legal challenges being made to any new limitations on gatherings and any new requirements for masking or vaccination," Oleske said.

The Supreme Court set new boundaries last term, voting, for example, 5-4 in one case in April to block California's restrictions on at-home gatherings. The restriction had been challenged by a pastor and his wife seeking to host at-home Bible study. The court adopted what legal experts refer to as "most favored nation" status. Simplified, that means that if the government makes an exemption for anyone, it has to make an exemption for the religious plaintiff.

The issue of vaccine mandates, however, is not as simple. Groups fought for houses of worship to get exemptions from Covid restrictions they believed were available to secular entities, but they may see vaccine mandates in a different light, given that vaccine requirements likely include accommodations for religious believers, and that the government could have a more compelling reason for its actions.

"One important question is whether the court will be as solicitous of religious objections in the vaccination context as it was when dealing with Covid rules that had the effect of limiting the size of gatherings for religious worship," Okeske said.

One petition concerning the potential of Delta variant restrictions has made it to the high court. Calvary Chapel in Bangor, Maine, represented by Mathew Staver, chairman of the Liberty Counsel, sought to block the state from enforcing or reinstating any restrictions that it says would violate its religious liberty rights under the Constitution. Staver acknowledges that Maine lifted restrictions in May but fears it may reinstate them with the rise of the Delta variant.

"The Delta variant increases the urgency for the Supreme Court to permanently quarantine governors from imposing discriminatory restrictions on churches and places," Staver said in an interview. "The Constitution cannot be suspended by Covid-19 or any of its variants."

Vaccine requirements raise different legal questions and are less worrisome to some groups concerned with religious freedom because there is often the opportunity to get an exemption based on religious beliefs.

Back in 1905, the Supreme Court upheld a state vaccine mandate in Jacobson v. Massachusetts in a case concerning an outbreak of smallpox.

Now as the Biden administration unveils new requirements falling short of a mandate, legal experts say that private or public employers can make vaccine demands, although they must abide by anti-discrimination laws.

"Nothing in federal law prohibits an employer from requiring vaccines so long as they provide accommodations to people with disabilities and those with sincerely held religious beliefs," said

"Legally it appears that it will be difficult for a vaccine mandate challenge to succeed in federal court," she said.

In guidance titled "What you should know about Covid-19," the US Equal Employment Opportunity Commission, an independent agency that enforces workplace anti-discrimination laws, said that federal laws "do not prevent an employer from requiring all employees physically entering the workplace to be vaccinated subject to reasonable accommodation provisions of Title VII and the Americans with Disability Act."

Title VII of the Civil Rights Act prohibits discrimination based on race, color, national origin, religion and sex. According to the EEOC guidance, Title VII requires an employer to "provide reasonable accommodations because of a disability or a sincerely held religious belief, practice or observance."

The guidance explains that a "reasonable accommodation" that "does not pose an undue hardship on the operation of the employer's business" might include allowing an unvaccinated employee to enter the workplace to wear a mask, work at a social distance from co-workers ,work a modified shift, get periodic tests for Covid, be given the opportunity to telework, or accept reassignment.

There have already there have been some challenges to the fact that the vaccines have yet to be fully approved by the Food and Drug Administration but were instead authorized under the FDA's emergency authority. The Department of Justice's Office of Legal Counsel issued legal guidance last month holding that federal food and drug law "does not prohibit public or private entities from imposing vaccinations requirements, even when the only vaccines available are those authorized under EUA [emergency use authorization]."

It stressed, however, that it's opinion only addressed food and drug laws, and left open the possibility that other "federal, state, or local laws or regulations" might "restrict the ability of public or private entities to adopt particular vaccine policies." That is likely the reason that President Joe Biden has steered carefully around the issue of national mandates.

In a case out of Texas, a federal judge dismissed a challenge brought by employees that objected to vaccine requirements put forward by Houston Methodist Hospital. Critically, the hospital permits religious exemptions pursuant to Title VII.

US District Judge Lynn Hughes rejected the challengers' allegations that the vaccine is "experimental and dangerous" and cited the EEOC guidance in his opinion.

Jared Woodfill, an attorney for the plaintiffs, said he is already preparing an appeal.

Staver is looking carefully at vaccine mandates, particularly because the Department of Veterans Affairs is the first agency to require its workers including doctors, dentists, registered nurses and physician assistants to get vaccines.

Staver, has misgivings about such requirements. "No one should be forced to inject a drug into their body, especially one that is not fully approved by the FDA," Staver said. He said his group has been working successfully to obtain religious accommodations for some who object to the Covid shot. "At the same time, we are preparing litigation to stop mandatory shots."

"As with the church litigation, we will work to expedite any of our legal challenges to the Supreme Court," Staver said.

But other groups haven't followed suit -- with some expressing approval for vaccine requirements.

Back in December, the Vatican gave the green light to vaccines after some groups that oppose abortion raised concerns about whether the vaccines were made using cells from aborted fetuses. The cells are actually engineered and grown in labs from tissue acquired many decades ago, and are not made directly from aborted fetuses.

The Vatican's Congregation for the Doctrine of the Faith said in a note approved by Pope Francis that receiving the shot was morally permitted.

"It is morally acceptable to receive Covid-19 vaccines that have used cell lines from aborted fetuses in their research and production process," the note said.