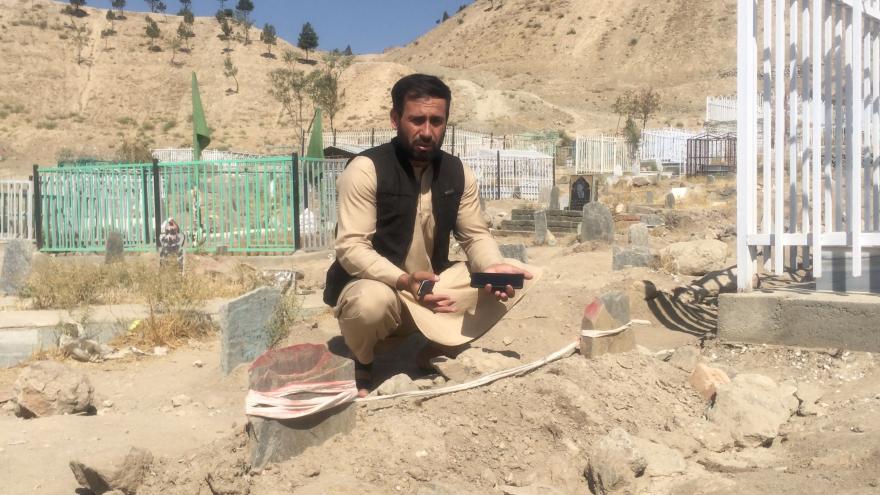 (CNN) -- Every day for the past month, Emal Ahmadi's 7-year-old daughter Hada has asked him the same thing: "Where is my sister?"

She misses playing with her younger sister Malika, he says. She cries a lot, wondering when she is coming home.

The tragic answer is that she won't return.

Malika died in a US drone strike in the courtyard of their family home in Afghanistan's capital on August 29, along with nine other relatives, six of them children.

The US military has since conceded it made a "tragic mistake," admitting that all of the 10 people killed were civilians -- and none were associated with terror group ISIS-K, as they initially claimed.

In a hearing Wednesday on the Afghanistan withdrawal, Gen. Frank McKenzie, the Commander of the US Central Command (CENTCOM), said the military knew civilians had been hit within four or five hours of the strike -- and they knew they had hit the wrong target within days.

The testimony appears to contradict information supplied to CNN almost two weeks after the strike by a US military official who said the US had "reasonable certainty" that at least one ISIS-K facilitator had been killed.

McKenzie had previously offered his "profound condolences" and said the US was exploring the possibility of ex gratia payments.

But one month on from the strike, the Ahmadi family say they are yet to receive any word from the US military, let alone any compensation.

The family struggles to pay for food, clothing and rent. They fear reprisals over their connections with the US. And they are desperate to get out of the country to safety.

"(The US) just showed to the world that they made an apology to us and fulfilled their responsibility," said Zamarai Ahmadi's sister Rohina. "But they don't know what my family is going through, what we were and what we are now."

One month after the strike, pockmarks scar the walls of the Ahmadi family home, hinting at the force of the Hellfire missile. The twisted metal remains of Zamarai Ahmadi's Toyota Corolla still sits in courtyard where it -- and he -- was struck.

But the home is empty -- the family have moved to a safer location in the hills of Kabul.

The strike has made them vulnerable in more ways than one. The family's US connections through Zamarai Ahmadi's work are now widely known, and his death has left his wife and daughter without a husband and father in a country where women can't leave the house without male companions.

Zamarai Ahmadi was the head of the family who all lived together in the same compound, says his younger brother Emal Ahmadi. He was the breadwinner, made key decisions and had been like a father to him since their father died when Emal was just 8.

"Right now, once again, I think that I lost my father once more," Emal Ahmadi said. "We don't know what to plan and what to do, how we should move forward, with no future we keep on living."

The family says they still haven't heard anything from the US beyond public statements.

"They have admitted their mistake, but they cannot give us back our family," Rohina Ahmadi said. "A house full of life was turned into a graveyard."

Even before the strike, the family were applying for visas to get to the US and out to safety. Now, that's even more urgent.

The California-based nonprofit Nutrition and Education International (NEI) where Zamarai Ahmadi worked has supported the family as best as it can, including helping them to rent another house, according to Zamarai Ahmadi's boss, who asked to only be known by his middle name, Walid, for fears over his security.

"It's going to be so hard for his wife and daughter to survive in Afghanistan," said Sonia Kwon, a senior advisor at NEI. "It's a very scary situation for them.

"They want a fresh start. I think that they deserve one," she said. "I just hope the US government has the compassion to grant what they want."

Secretary of Defense Lloyd Austin told the Wednesday hearing that the US would continue to work through State Department channels to engage the family.

"If they desire to leave, then we'll certainly do everything we can to facilitate getting them out," he said.

CENTCOM, the geographic command that oversees military operations in the region, declined to comment when asked whether it had reached out to Zamarai Ahmadi's family, if it was working toward resettling the family, and protecting them while they were still in Afghanistan.

Not far away, in a northern Kabul suburb, colorful children's paintings and a whiteboard with homework hang on the walls of a modest house.

It's the house NEI country director Walid grew up in -- the house he now shares with his three sisters, parents, wife and their three daughters, two of whom played happily around him, when visited by CNN.

They're a family of doctors and teachers, he says -- people who have helped their community.

But in late August, the US military assessed that the family home they have lived in for 40 years was an ISIS-K safehouse.

According to a briefing earlier this month from a US official with knowledge of the matter, chatter following a deadly terrorist attack on the airport on August 26 led them to a so-called safehouse, which they monitored for 36 hours.

There "wasn't much activity" around the house until a Toyota Corolla pulled out of the house on the morning of August 29 -- the car that would ultimately turn out to be Zamarai Ahmadi's.

The US tracked Zamarai Ahmadi's car for eight hours before launching the deadly strike shortly after the car had pulled in at his family compound.

In a September 17 press conference, McKenzie said the compound where Zamarai Ahmadi's car first began being tracked was still assessed as being "very definitely associated with ISIS-K."

He claimed that just under 24 hours later, rockets were launched from that point to the capital's airport. This week CENTCOM declined to comment on whether it still maintained that the location was an ISIS-K safehouse.

But Walid says the claim of an ISIS-K connection is "absolutely untrue."

"We have never been, we are not, and we will not be those kinds of people," he said. "I do expect the US government to clear this label from our house. It is a damage to our dignity ... and definitely it puts us at huge risk."

And Walid says on the day of the strike he left home early to drive to the office, before asking Zamarai Ahmadi to collect a laptop he'd accidentally left at home. US operatives saw Zamarai Ahmadi pull into the house, and from that point they tracked his movements.

The car's route and frequent stops that day seemed to confirm US suspicions that he was preparing an attack on Kabul airport.

They saw Ahmadi and other men loading heavy containers into cars, which the US thought contained explosives.

They were later shown to contain water Ahmadi was taking home to his family's compound.

The day after missile strike, ISIS-K attempted to fire rockets at Kabul airport.

Walid has a US green card and desperately wants to be resettled there. As Kwon points out, as part of the green card process, the US have Walid's address.

"Why would you why would you give a green card to someone that you think is ISIS?" Kwon questioned. "It gets more and more absurd ... it's more than a mistake."

Walid worries that the same thing that happened to his friend Zamarai Ahmadi could happen to him.

"It really is a nightmare for me. Some nights I jump from my bed because this is called a safehouse -- it could also be targeted."

Two investigations into what took place on August 29 are ongoing -- one directed by the Secretary of the Air Force, and one by the Defense Department's inspector general.

Those investigations will consider what went wrong, whether someone should be held accountable, and whether any procedures around strike targeting need to be changed in the future.

But experts caution these sorts of tragic strikes have happened before.

Larry Lewis, an expert in reducing civilian casualties at nonprofit research and analysis organization CNA, said the issue of misidentified targets was a "pervasive problem."

An international explosives engineer, who asked not to be named for professional reasons and who reviewed CNN video of the scene, said: "On the evidence presented, it looks like someone in the chain of command has lied."

CENTCOM declined to comment on the accusation that it lied to the public. It also did not respond to accusations that civilian deaths were a pervasive problem and that there was little transparency.

After weeks of trying to contact the Department of Defense, Kwon from NEI said Secretary Austin's office finally responded in a letter Wednesday. The letter, seen by CNN, said Zamarai Admadi's actions that day were "completely harmless."

But Kwon says she is surprised the US says it hasn't been able to get in touch with people on the ground, given that NEI has been supporting the family and working to get its staff to safety.

"If they were truly sincere, if you really mean what you say, you are sorry for killing his entire family ... then why haven't you talked?" she questioned.

"What is an apology without appropriate action?" she questioned. "It's just words."