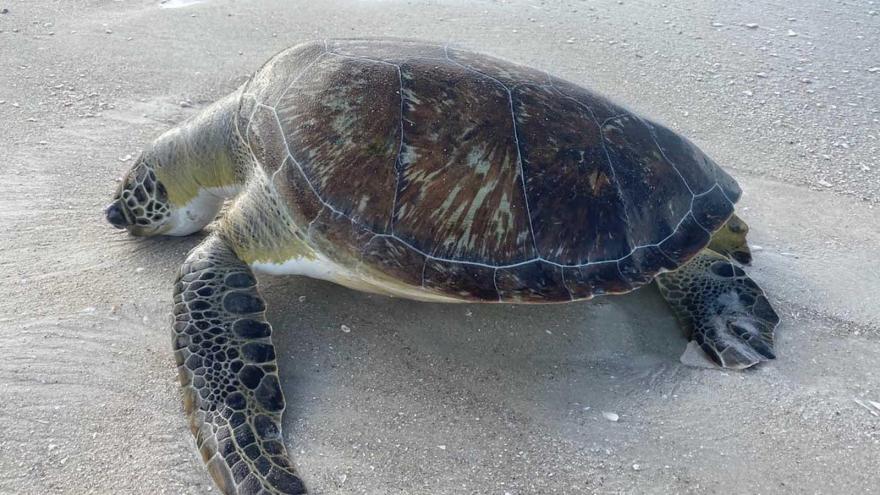 This green sea turtle is one of 58 that died in October 2019 in Collier County, Florida. **Credit: Collier Couty Parks & Recreation Department**

(CNN) -- As a toxic red tide continues to grip the coast of southwest Florida, one county saw the highest number of sea turtle deaths it has ever recorded for a single month in October.

Last month, 58 turtles were reported dead in Collier County and two others were reported sick or injured, according to Maura Kraus, the principal environmental specialist for the county's parks and recreation division.

The county's records of sea turtle strandings -- which includes sick, injured or dead turtles -- date back to 1989.

The uptick is striking.

Over the past decade, Collier County has recorded an average of just under five sea turtle strandings a month in October.

This past month's count of strandings is about 12 times higher than the 10-year average, according to Allen Foley, a wildlife biologist with the Florida Fish and Wildlife Research Institute and the lead coordinator for the state's sea turtle stranding and rescue network.

In all of last year, during one of the worst red tide outbreaks the region has ever seen, 133 turtles were stranded in Collier County.

"It's disturbing to us," Kraus said. "It's either that we have a lot more turtles out there, or we have a really big problem."

Of the turtles found dead in October, Kraus said that most were Kemp's Ridley sea turtles -- the world's smallest and most endangered sea turtles.

The timing of these turtle deaths tracks closely with the arrival of this year's red tide in Florida, which began to spread along the state's southwest coast early last month, Foley said.

The red tide is a natural phenomenon that has occurred for centuries, but there are questions about what exactly is causing the intense outbreaks of the past several years.

It typically forms in deeper waters and then is carried onshore by winds and currents, but this year's event began closer to the coast, where scientists say nutrient runoff from fertilizer used on farms, lawns, and other sources can accelerate its growth.

Scientists say this current outbreak is nowhere near as serious as the historically bad event that began in 2017 and lingered for 16 months until early this year.

But high concentrations of the toxic algae are holding steady in the waters off the state's southwest coast.

"Red tide [toxins] can concentrate in the food sources of these turtles," Kraus said. "Kemp's Ridley's are much smaller, so they are more prone to feeling the effects of the red tide."

Lee County, home to the Fort Myers area and located just north of Collier, also reported an abnormally high number of stranded turtles, with 40 found in the month of October.

Foley says the turtles that are found dead or sick will undergo testing to confirm a cause of death, but with so many dying without any other apparent afflictions, there's only one likely explanation.

"There is really no reasonable doubt that the high number of strandings are caused by anything other than red tide," he said.

On the bright side, both Foley says that the turtle strandings have slowed over the last few weeks and appear to have peaked. As water temperatures drop as winter approaches, he says most of the turtles have likely moved away from the highest concentrations of the toxic algae.