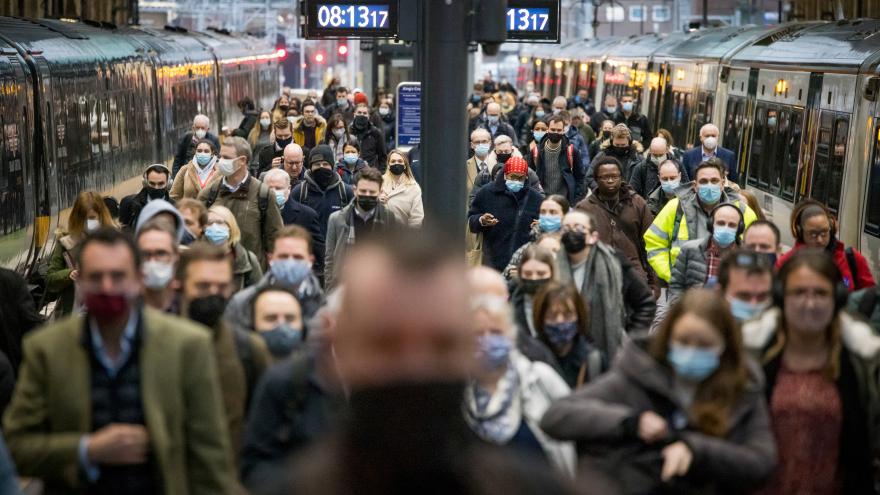 (CNN) -- The rapid spread of the Omicron coronavirus variant has broken pandemic records and shuttered borders in several parts of the world, as governments and scientists scramble to understand the implications of the strain before it supersedes Delta and becomes dominant worldwide.

Dr. Anthony Fauci said the United States was "looking over (its) shoulder" at the encroaching variant while battling an ongoing Delta outbreak on Wednesday, as he urged people to get vaccinated and receive booster shots to shore up the American population's protection.

"We are already in a Delta surge. I mean, the cases are going up," Fauci, the director of the National Institute of Allergy and Infectious Diseases, told CNN. "And then you have, looking over your shoulder, the Omicron variant, which we know from what's going on in South Africa and in the UK, is a highly transmissible virus."

Much of the world's attention is on those two countries, which have been battered by Omicron waves earlier than most of the world.

Both nations recorded their highest number of new Covid infections ever on Wednesday, and Britain's top scientists warned that milestone would likely be topped again soon. In London, Omicron has become the dominant strain of Covid, just days after Britain announced its first cases of the variant.

But hospitalizations have, for now, remained lower than in previous waves in South Africa, where the first outbreak of Omicron was detected last month -- leading the country's National Institute for Communicable Diseases (NICD) to strike a cautious tone of optimism.

"Although the data are still being gathered, the evidence suggests that the current wave may be milder," the agency said on Wednesday.

Many scientists around the world remain reluctant to draw such conclusions; England's Chief Medical Officer Chris Whitty said Wednesday that the data in South Africa is incomplete, and warned that even a less severe disease could rip through the country's healthcare system unchecked.

"I want to be clear: I'm afraid this is going to be a problem," Whitty said. "(The) exact proportions of it, of course, South African scientists and UK scientists and scientists globally are trying to determine at the moment."

France toughened restrictions on travelers coming from Britain on Thursday in response to the Omicron threat. Those arriving from the UK will need a "compelling reason" for entry into France and will also be required to present proof of a negative test taken no more than 24 hours before departure, government spokesperson Gabriel Attal told CNN affiliate BFMTV.

Prime Minister Jean Castex also urged French people planning to visit the UK to postpone their trips, days before Christmas. He quoted the UK government's own admission that it faces a "tidal wave" of cases of Omicron variant.

France was itself added to Israel's red list of high-risk countries on Wednesday, along with Spain, the United Arab Emirates, Ireland, Norway, Finland and Sweden.

And the variant is beginning to threaten plans to open up economies in southeast Asia. Indonesia and New Zealand reported their first Omicron cases on Thursday, while South Korea announced it will tighten social distancing measures. South Koreans will now be able to mix only in groups of eight -- or four in the greater Seoul region -- as Delta cases and Omicron-related concerns rise in the country.

Meanwhile, the first signs of an Omicron outbreak in Australia are emerging. The state of New South Wales reported its highest number of Covid-19 cases on Thursday, with 122 of the 1,742 new infections coming from the new strain. NSW Health urged the local Newcastle community, where most recorded cases are the Omicron variant, to "seriously consider" postponing social events until after Christmas.

The main cause for concern is the extent to which Omicron can evade current vaccines. US researchers reported Wednesday they had found the Omicron variant of coronavirus is "markedly resistant" to four major shots, saying that Omicron "is now the most complete 'escapee' from neutralization by currently available antibodies."

"The scientific community has chased after SARS-CoV-2 variants for a year. As more and more of them appeared, our interventions directed to the spike became increasingly ineffective," Dr. David Ho of the Aaron Diamond AIDS Research Center at Columbia University and colleagues wrote in their report, posted online as a pre-print. It has not yet been peer reviewed.

But studies have shown that a booster dose can restore protection substantially, adding urgency to booster drives around the world.

"The vulnerable people are the people who have not been vaccinated, and I hope that the possibility that we're seeing -- that we're going to be getting a surge of Omicron, which is almost inevitable given its characteristic of high degree of transmissibility," Fauci said on Wednesday. "We have the tools to be able to blunt this. We just need to implement them."