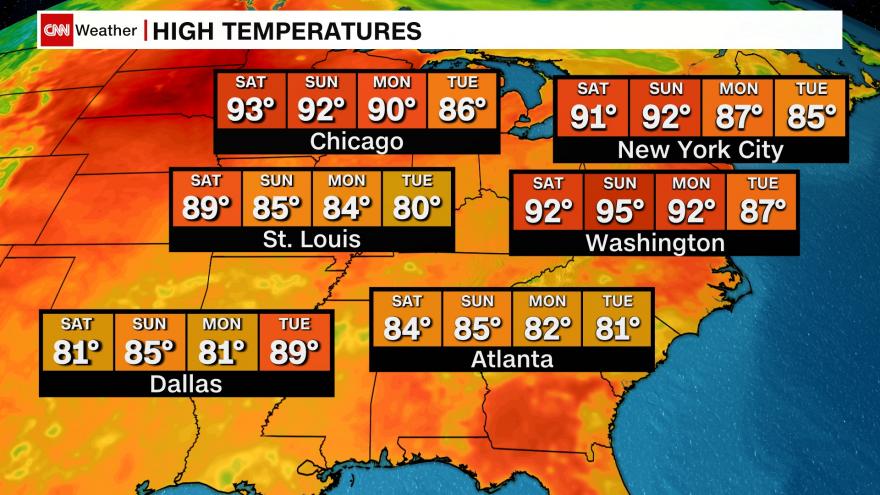 (CNN) -- More than five million Americans are under heat alerts as a record-breaking heat wave continues to grip the country.

The heat wave has dominated the West this week, but it makes its long-awaited arrival in the Northeast today. The hottest temperatures of the year are expected.

Saturday will be the first 90-degree day of 2021 for Central Park in New York City. The nation's capital will reach the low 90s on Saturday and Sunday, too, and Boston could see a string of highs in the mid-90s through late next week.

If Boston sees the mercury rise above 90 degrees for at least five straight days, this heat wave will be the longest in nearly a decade.

Meanwhile, the Midwest and Plains continue to see temperatures approach the century mark.

The Twin Cities' National Weather Service office has issued a heat advisory for the area until 9 p.m. local time as a result.

Meteorologists expect thermometers to hit exactly 100 degrees on Saturday in Minneapolis-St. Paul, which will shatter a record high temperature not seen since 1925. And similar temperatures are expected Sunday.

This is simply more of what the West has been dealing with all week.

Dozens of records have been broken since the start of June with the jet stream bulging north -- allowing deep, tropical air to settle over the United States.

More than 160 additional heat records are in jeopardy from West Coast to East Coast until this heat wave ends next week.

Areas in the Northwest will get a reprieve from the heat as a late season cold front moves through the region this weekend, but the rest of the US will have to endure the excessive heat through Wednesday.