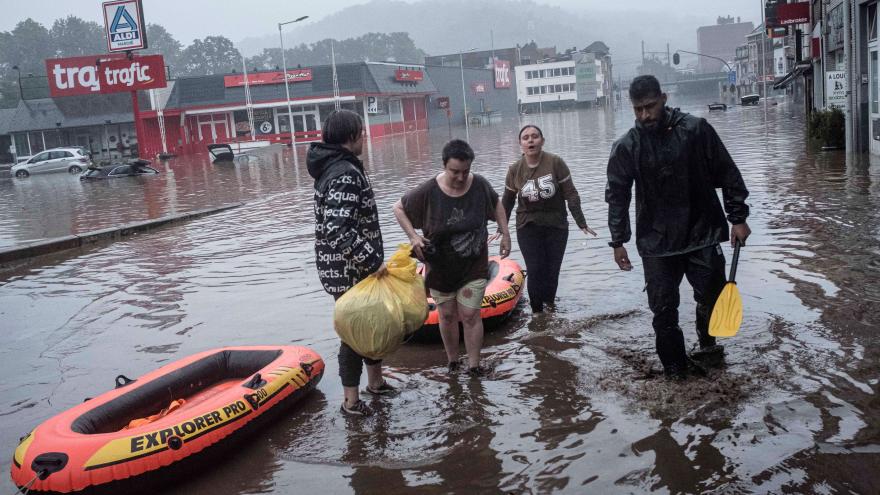 Shocking images of the devastation in Germany and Belgium showed entire villages underwater, with cars wedged in between collapsed buildings and debris. The Netherlands and Luxembourg have also been affected by the extreme rainfall.

In Germany, at least 105 people have been killed across two western states. In the hard-hit district of Ahrweiler, in the state of Rhineland-Palatinate, authorities told CNN that 1,300 people remained unaccounted for.

"There is no end in sight just yet," Ulrich Sopart, a police spokesman in the city of Koblenz, told CNN. He said that authorities are hopeful that they will be able to revise down the number of missing people as the rescue operation continues and phone lines are restored.

''Our hopes are that some people might have been registered as missing twice or even three times -- if for example a family member, a work colleague or a friend has registered a person as missing," Sopart said.

''Also, [in] some places phone lines are still down and reception is difficult. We do hope that people will get in touch with a relative, work colleague or friend to let them know they are fine," he said.

A dam along the river Rur in the western German state of North Rhine-Westphalia broke Friday night, according to the regional government. Officials have started the evacuation of about 700 residents in the Ophoven neighborhood in the city of Wassenberg.

Officials fear more dams can break and are closely monitoring reservoirs in the region.

Barring any more severe weather, people who evacuated the flooding in the county of Euskirchen in North Rhine-Westphalia can most likely return to their home sometime on Sunday, the county said on its Facebook page. This comes as water is being drained from the Steinbach dam to reduce pressure. Officials said creeks are filling, but are not expected to overflow their banks.

Officials had been monitoring the dam by drone earlier in the day and found no significant damage. A clogged pipe has also been opened up to help with the water release.

Germany has deployed 850 troops to assist with disaster relief, the Bundeswehr (Germany armed forces) said Friday in a tweet.

"Together with civilian helpers, the technical relief organization, fire brigades, we are pooling all available forces," Bundeswehr officials said.

At least 165,000 people are currently without power in Rhineland-Palatinate and neighboring North Rhine-Westphalia, authorities told CNN.

In North Rhine-Westphalia, where at least 43 people have died, the state's Interior Ministry spokeswoman Katja Heins told CNN: ''The situation remains very dynamic -- we do not know how many people are unaccounted for."

The death toll in Rhineland-Palatinate has risen to at least 62, according to police, who said on Friday that at least 362 people have been injured.

The state premier, Malu Dreyer, said that every hour brought bad news. "It is to be feared that the number will rise even further, '' Dreyer said at a news conference, adding: ''We have not yet reached the stage where we can say that situation is easing."

At least nine people at a disabled care facility drowned after being caught in floodwaters. The facility, located in the town of Sinzig, in the Ahrweiler district, became so quickly inundated that the residents -- who had been sleeping -- were unable to escape, despite efforts by caretakers to bring them to safety, according to CNN affiliate NTV.

The states of North Rhine-Westphalia, Rhineland-Palatinate and Saarland have been the worst affected by the record rainfall, which authorities have called the heaviest in a century.

''In some areas we have not seen as much rainfall in 100 years," a spokesperson for the German weather service DWD said, adding that in those regions, they have "seen more than double the amount of rainfall," causing flooding and structures to collapse.

Large swaths of western Germany saw 24-hour rainfall totals between 100 and 150 millimeters (3.9-5.9 inches), which represent more than a month's worth of rainfall in this region, according to CNN meteorologist Brandon Miller.

Cologne, in North Rhine-Westphalia, recorded 154 millimeters (6 inches) of rainfall in the 24 hours to Thursday morning, which is nearly double its monthly average for July of 87 millimeters.

Heavier localized downpours resulted in extreme flash flooding. In Reifferscheid, in the Ahrweiler district, an incredible 207 millimeters (8.1 inches) of rain fell in only nine hours, according to the European Severe Weather Database.

The intense deluges were the result of a slow-moving area of low pressure, which allowed a conveyor belt of warm and moist air to fuel powerful thunderstorms and heavy, long-lasting rain, according to the German weather service.

'Climate change has arrived in Germany'

Extreme rainfall is becoming more common in the warming climate, as warmer air can hold more water vapor that is available to fall as rain.

"Climate change has arrived in Germany," Environment Minister Svenja Schulze tweeted Thursday ,adding that "the events show with what force the consequences of climate change can affect us all, and how important it is for us to adjust to extreme weather events in the future."

Hannah Cloke, a professor of hydrology at the UK's University of Reading, told CNN that "these kind of high-energy, sudden summer torrents of rain are exactly what we expect in our rapidly heating climate."

European Commission President Ursula von der Leyen said on Friday that the widespread flooding is evidence of the need for urgency in acting on climate change. "It is the intensity and the length of the events that science tells us this is a clear indication of climate change and that this is something that really, really shows the urgency to act," she said.

On Thursday, the DWD predicted that the "worst of the torrential rainfall is over," although more heavy rain is expected in southwestern Germany on Friday.

In neighboring Belgium, at least 20 people have died, according to the Interior Ministry. Earlier Friday, the mayor of the badly hit city of Liège had placed the toll at 22. Some 21,000 people are also without electricity in the southern region of Wallonia, according to energy supplier Ores, who said that the situation across the power network remains "extremely complicated." Some 300 distribution points are flooded and impossible to reach, it said.

Belgium will hold a national day of mourning for flood victims on Tuesday, Prime Minister Alexander De Croo announced, saying the country stands "shoulder to shoulder" with one another.

The Belgian army is continuing with search and rescue operations as many people are still stranded in their homes without electricity.

'There is no more time to leave the house'

On Friday afternoon, a Dutch embankment in the province of South Limburg broke, with local authorities warning residents to urgently take action.

After a large hole was found in a dike alongside the Juliana Canal, the regional safety authority warned residents to urgently close all windows and doors, saying that there was not enough time to evacuate.

"Residents in Bunde, Voulwames, Brommelen and Geulle must close windows and doors as quickly as possible and move to a safe floor of their house," the safety authority's statement read.

"There is no more time to leave the house," it said, adding: "This area will be under water."

Meanwhile, a hospital in the Dutch town of Venray, in North Limburg, was being evacuated on Friday afternoon. Around 200 patients would be transferred to other hospitals, the regional safety authority said.

More than 150 rescue workers from France, Italy and Austria are currently in Belgium "providing emergency assistance to people affected by the catastrophic floods," the European Commission said.