Record number of kids are in Border Patrol custody and shelter beds are scarce, documents show 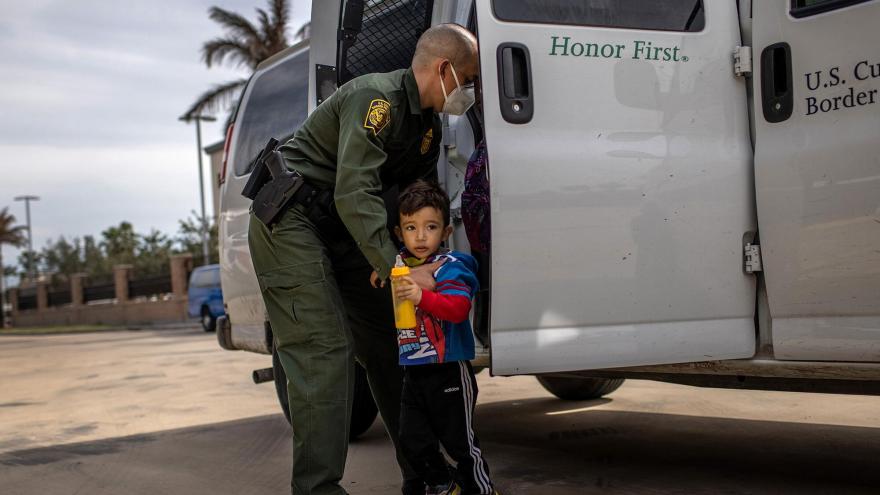 More than 3,200 unaccompanied migrant children were in Customs and Border Protection custody, according to the documents dated Monday.

(CNN) -- The number of unaccompanied migrant children in US Border Patrol facilities, which are akin to jail cells and not intended for kids, has reached dramatic highs, according to internal agency documents reviewed by CNN, underscoring the urgent challenge facing the Biden administration.

More than 3,200 unaccompanied migrant children were in Customs and Border Protection custody, according to the documents dated Monday. Of those, around 2,600 were awaiting placement in shelters suitable for minors, but there were just over 500 beds available to accommodate them.

The latest data comes on the heels of a trip to the US-Mexico border by senior administration officials to assess the situation on the ground amid an increasing number of arrests and indicates a rapidly increasing trend of unaccompanied children coming into the US. Less than a week ago, there were around 1,700 children in Border Patrol custody.

The officials were in fact-finding mode, a person familiar said, and many were taking notes during their conversations. Biden is expected to be briefed in the coming days as aides spent some of the trip comparing notes and planning how to present the information to the President.

Among those who went was Susan Rice, former President Barack Obama's national security adviser who now heads Biden's Domestic Policy Council. A source familiar with the visit told CNN that Rice was engaged during the visit and, at times, pressed Department of Health and Human Services officials, who run the shelters for unaccompanied migrants, on how they were preparing to respond to the surge and process migrant children more efficiently.

HHS told CNN in a statement Monday that the Office of Refugee Resettlement "is aggressively working with our interagency partners to ensure that unaccompanied migrant children are safe and unified with family members or other suitable sponsors as quickly and safely as possible."

"The number of unaccompanied children (UC) in our care is constantly changing," the department said.

The growing number of unaccompanied children has raised alarm bells among officials scrambling to find shelter space to care for kids amid an ongoing pandemic that resulted in some locations keeping some beds unoccupied to comply with health guidelines.

Monday's data reveals the continued bottleneck in the system, with more children coming into custody than the US government is prepared to care for. It also emphasizes the hurdles facing the Biden administration as it tries to strike a more humanitarian approach on immigration while juggling the realities on the border.

The numbers are overwhelming. To compare, at the peak of the 2019 border crisis -- when there were overcrowded facilities and children sleeping on the ground -- there were around 2,600 unaccompanied children in Border Patrol custody, a former CBP official told CNN.

A myriad of reasons can account for the sudden rise in children at the US-Mexico border, including the pandemic's dramatic toll on Latin America, where economies once projected to grow have been decimated, the results of two devastating hurricanes that hit the region, and a perception of relaxed enforcement by the Biden administration.

Chief of staff to the first lady Julissa Reynoso briefly discussed her trip to the US-Mexico border as part of a delegation of the senior administration officials that also included Rice and Homeland Security Secretary Alejandro Mayorkas.

"We did speak to many of the folks involved, including children. We're trying to manage this in an orderly fashion but very mindful of the human cost here, and in light of the fact that we are talking about kids. So that is something that we are managing," Reynoso told reporters Monday.

The group flew from Washington on a military plane and made their first stop at the CBP tent facility in Donna, Texas, in the Rio Grande Valley, which has been processing undocumented migrants. From there, the group flew north along the border to Laredo, where they landed and drove to the facility housing children in Carrizo Springs. The trip lasted most of Saturday.

On Friday, the Biden administration notified facilities caring for migrant children that they can open back up to pre-Covid-19 levels, acknowledging "extraordinary circumstances," according to a memo obtained by CNN.

After being taken into Border Patrol custody, unaccompanied children have to be turned over within 72 hours to the Department of Health and Human Services, which is tasked with the care of migrant children, barring exceptional circumstances.

Once in care, case managers will work to place children with a sponsor, like a parent or relative, in the US, but as a result of the coronavirus pandemic, and precautions to avoid spread of Covid-19, the department has only been able to use a little more than half of the beds it has for children.

CNN reported last week that the average time in Border Patrol facilities, which are not designed to hold children, was 77 hours, longer than the 72 permitted under US law.

That trend appears to be continuing. More than 1,300 children were in Border Patrol custody for more than 72 hours, according to documents. The majority of children are 13 years old and up.