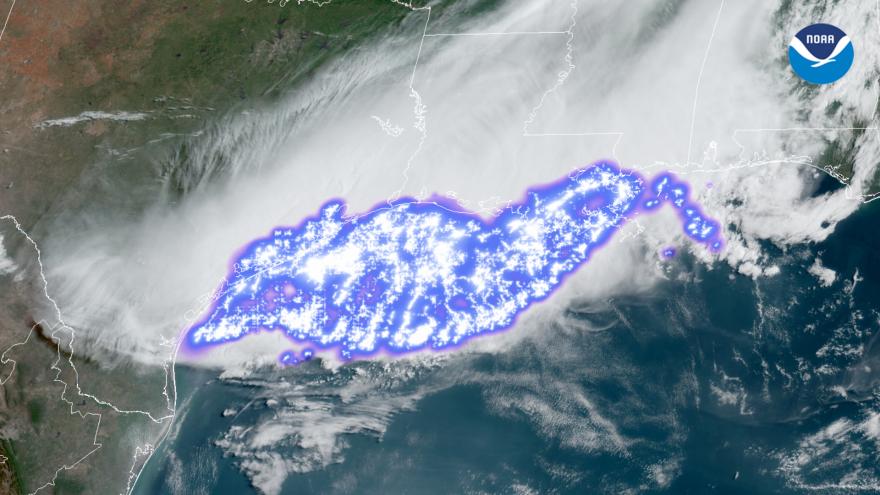 (CNN) -- Two new world records for megaflashes of lightning have been recorded by the World Meteorological Organization (WMO), including one for longest distance of a singular flash in North America and one for longest duration in South America.

"A mega-flash is a really, really big lightning flash," Randall Cerveny, a rapporteur of Weather and Climate Extremes for WMO told CNN. "Most lightning flashes in storms travel only a few miles or so. A megaflash can extend for hundreds of miles!"

The official definition of a megaflash is any horizontal lightning bolt which travels more than 62 miles (100 kilometers.)

The new record flash went far beyond the definition.

The new record for longest single flash covered a horizontal distance of approximately 477 miles (768 kilometers) from Texas to Louisiana April 29, 2020. The impressive distance is comparable to the stretch between New York City and Columbus Ohio, said Cerveny. It bypassed the previous record by 60 kilometers.

Though it broke the record for distance, it did not break the record for longevity, which went to a different megaflash in South America lasting more than 17 seconds, setting a new record for duration.

It was documented October 31, 2018, within a thunderstorm over Uruguay and Northern Paraguay. This megaflash lasted for around 17.102 seconds, which edged out the previous record by just 0.37 seconds.

Previously, the duration and extent of lightning flashes were documented using ground-based Lightning Mapping Array (LMA) networks. However, scientists found the technology could only detect lightning up to a certain magnitude.

Scientists decided to find a way to look down at the lightning.

With new advances in technology, lightning scientists have been able to use Geostationary Lightning Mappers (GLM's) on satellites orbiting in space to collect a larger scale of lightning data such as the new megaflash lightning records.

The new technology provides a window into an aspect of weather which was previously elusive. Michael J. Peterson of the Space and Remote Sensing Group of Los Alamos National Laboratory said, "We are now at a place where we have excellent measurements of its [lightning's] many facets, which allow us to discover surprising new aspects of its behavior."

As technology continues to advance, experts in the field are optimistic for lightning detection of an even greater scale in the future. Randall Cerveny said, "It is likely that even greater extremes still exist, and that we are able to observe them as lightning technology improves."

"But these findings are also important to the general public as a stark reminder that lightning can strike far away from the parent source region," Cerveny said.

Hear thunder? This is what you should do next

With severe weather season approaching across the United States, the threat of lightning to the public is a prominent concern.

Locations such as the Great Plains in the United States and the La Plata basin in South America are particularly vulnerable to the types of thunderstorms from which megaflashes originate.

Lightning experts urge people living in severe weather prone areas to be aware of lightning-safe locations in the event of a strong storm.

Lightning specialist Ron Holle explained, "The only lightning safe locations are substantial buildings that have wiring and plumbing structures; not structures such as at a beach or bus stop." If you are not near a lightning-safe building he suggested the second-best option being "inside an enclosed metal-topped vehicle; not dune buggies or motorcycles."