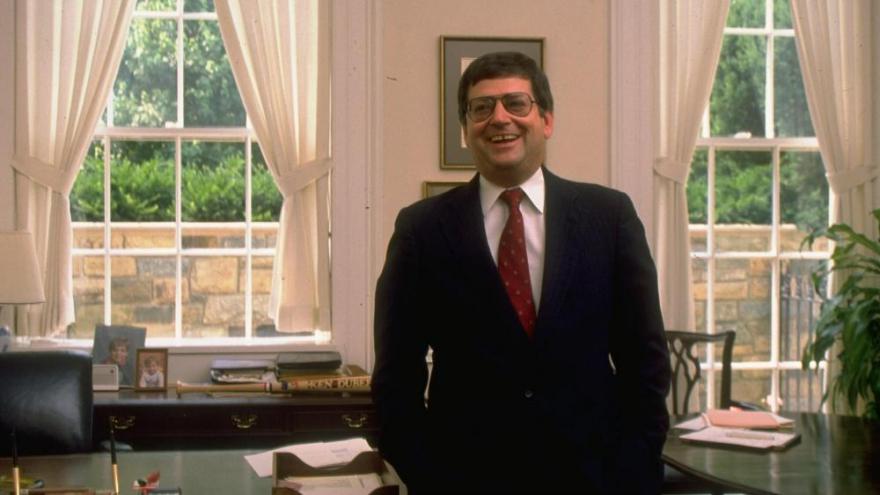 White House chief of staff Ken Duberstein, here in his White House West Wing office in 1988, has died at the age of 77.

(CNN) -- Ken Duberstein, President Ronald Reagan's chief of staff during his final year in office, died Wednesday of complications from a longstanding illness, his son confirmed to CNN. He was 77.

Duberstein was a "close confidant" and adviser to Reagan, serving in the White House at the beginning of the Republican President's first term in office and in the homestretch of his second term.

He first joined the administration as a congressional liaison in 1981, helping push Reagan's tax cuts and budget proposal through Congress.

He resigned in 1983 and joined a lobbying firm, only to be called back to the White House in 1987, when Reagan's approval ratings were at an all-time low following the Iran-Contra scandal.

"I wasn't sure if I was going to come back to work again in the White House," Duberstein recalled in 2004. "And I walked into the Oval Office at the President's request and he said, 'I understand all the reasons why you might not want to come back, but I just want you to know one thing. Nancy and I want you to come home for the last two years of the Administration.' And I said, on the spot, 'Yes, sir.'"

This time, he returned to the Oval Office as deputy chief of staff as part of a new team that included Howard Baker as chief of staff and Colin Powell as national security adviser.

In 1987, Duberstein accompanied Reagan to the Berlin Wall, where the President issued his famous challenge to Soviet leader Mikhail Gorbachev to "tear down this wall."

Duberstein later succeeded Baker as chief of staff, in July 1988, and helped the Reagans transition out of the White House and return to private life in those final months.

When Reagan left the White House on January 20, 1989, leaving the keys to his successor and vice president George H.W. Bush, Duberstein departed Washington with Reagan on Air Force One back to California.

"Ken was a champion of the policies and principles of Ronald Reagan and effectively served his administration in multiple roles," Fred Ryan, chairman of the Ronald Reagan Presidential Foundation and Institute, said in a statement. "He will be missed by all of us who had the chance to work with him."

James Baker, the longtime Republican Party grandee who also served as one of Reagan's chiefs of staff, described Duberstein on Thursday as a "consummate Washington insider, one who skillfully operated at the intersection politics and public policy."

After he left the administration, Duberstein helped steer presidential nominees through their confirmation process, acting as a so-called sherpa for Supreme Court Justices Clarence Thomas and David Souter, according to The Washington Post.

He also used his insider knowledge of Washington, working as a consultant on the TV show "The West Wing."

The earlier part of his government career was spent working for the General Services Administration in the 1970s and later the Department of Labor during the Ford administration. He also interned for Republican Sen. Jacob Javits of New York.

Duberstein was most recently chairman and CEO of The Duberstein Group, a strategic planning and consulting company.

He is survived by his wife, Jacquelyn, and four children.