Rare first-edition copy of US Constitution could fetch $20 million 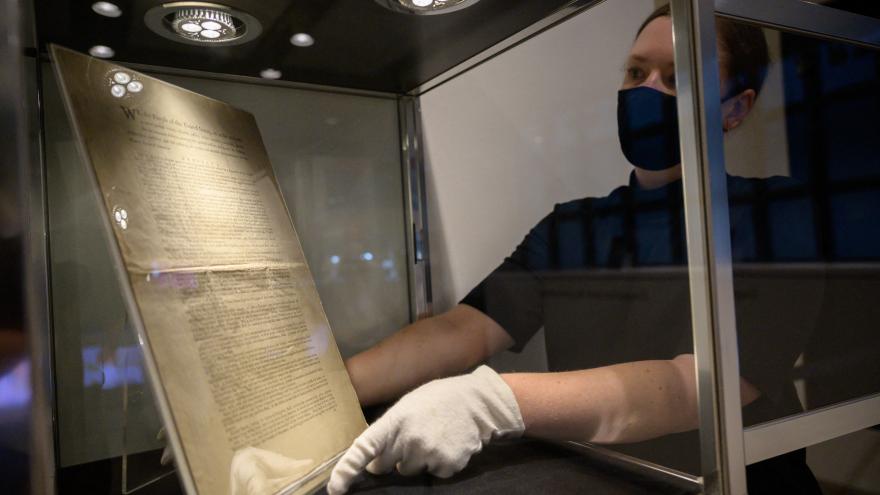 (CNN) -- An exceptionally rare first-edition printed copy of the US Constitution is going on sale in New York, with Sotheby's auction house expecting bids up to $20 million.

It is one of just 11 surviving copies -- and the last in private hands -- from the first printing of the document's final text, produced for delegates of the 1787 Constitutional Convention and Continental Congress.

Drafted during secret meetings in Philadelphia, the US Constitution laid the foundation for American democracy and guaranteed citizens' basic rights. Following the production of two earlier drafts, the Constitutional Convention's official printers created 500 copies of a final "official edition" and distributed them to delegates, according to Sotheby's.

The text up for auction in November belongs to collector and philanthropist Dorothy Tapper Goldman. It was originally acquired by her late husband, Howard, and had been "one of (his) dearest possessions," Goldman said in a statement.

"When it passed to me, I felt an incredible sense of responsibility to care for it, to share it, and to promote our nation's Constitutional principles," she added.

In a press release, Sotheby's described the document as "rarer than the first printing of the Declaration of Independence." The auction house's senior books and manuscripts specialist, Selby Kiffer, is meanwhile quoted as saying that the item is "one of the most rare and coveted historical documents" ever to head to auction.

Kiffer also oversaw the document's 1988 sale to the Goldmans, who purchased it for $165,000 from a private Philadelphia collector. In the years since, it has been loaned to institutions including the New York Historical Society and United States Supreme Court, among others. The other 10 surviving copies from the first printing are all now held in institutional collections, Sotheby's said.

The document is part of a larger sale of historic American documents from Goldman's collection, which features an early copy of the Articles of the Confederation, as well as an official printing of the Stamp Act.

Other rare copies of the US Constitution are included in the sale, such as editions signed by Presidents Millard Fillmore and Franklin Pierce. The two-part auction will also feature a range of state constitutions, with at least one from each US state up for sale.

Proceeds from the sale will go towards the Dorothy Tapper Goldman Foundation, an organization dedicated to "furthering the understanding of our democracy and how the acts of all citizens can make a difference" according to a press release.

Prior to the sale, the first-edition constitution will be exhibited at locations across the United States, starting at Sotheby's New York galleries, before moving onto Chicago and Dallas.