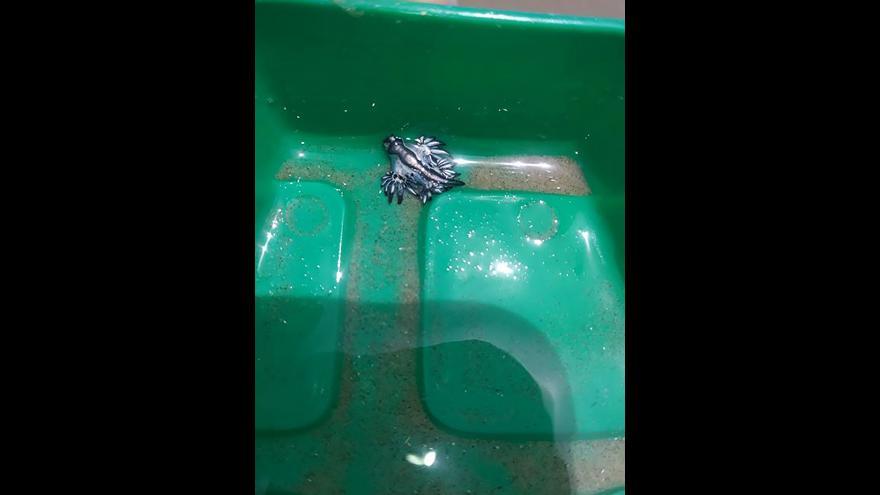 Visitors to the Padre Island National Seashore in Texas are discovering blue dragons during their trips, and though it may not be the flying, fire-breathing creatures their name may suggest, it's still "a rare find," the park says.

Hunter Lane, a 7-year-old from Mesa, Arizona, found four dragons within a few minutes on May 2 while vacationing with his parents. His father, Trey Lane, told CNN he's been vacationing at the seashore for 30 years, and he's never seen one.

"Hunter loves sea creatures and thought he had found a blue button jellyfish," Trey said. "After they picked it up in a beach toy he proclaimed to me that he had discovered a new species!"

Blue dragons, or glaucus atlanticus, are tiny sea slugs -- typically only 3 cm big, or a little over an inch. They can be found in the Atlantic, Pacific and Indian Oceans, according to the conservation nonprofit Oceana.

But even though the creatures aren't nearly as large as dragons, they pack a mean punch. Blue dragons eat Portuguese man o' wars, which look like large jellyfishes, and store stinging cells from their prey to use for the future, according to Oceana. So, when humans touch these little slugs, it can release the stinging cells and create a sting that can hurt more than a man o' war's.

"So, if you see a dragon in the park, be amazed as they are a rare find, but also keep your distance!" warns the national seashore.

Recently, many visitors to the seashore have seen the dragons, Jamie Kennedy, a spokeswoman for the park told CNN. She said the surge could be the result of a group washing up on the shore. However, in her two years of working at the national seashore, Kennedy said she hasn't heard of anyone seeing them until now.