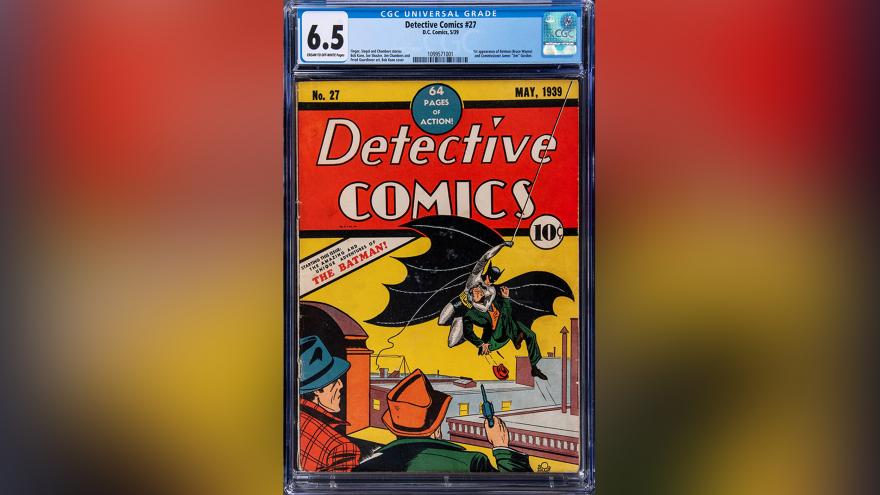 (CNN) -- A rare copy of Detective Comics #27 -- the issue that introduced the world to Batman in 1939 -- is set to fetch more than $1 million at auction this weekend and could flirt with a record for that edition.

The copy, up for auction for more than two weeks at US-based Goldin Auctions, had a $1.2 million bid early Saturday afternoon, with bids set to end at 10 p.m. ET.

The record public sale for a copy of the same issue is $1.5 million, made in 2020, according to auction house.

Goldin Auctions says the copy it's selling has a grade of 6.5 from Certified Guaranty Co., which grades collectibles' conditions on a scale of 0.5 (poor) to 10 (gem mint).

Batman's first-ever appearance was made in artist Bob Kane's and writer Bill Finger's story "The Case of the Chemical Syndicate," one of the several tales tucked away in the pages of Detective Comics #27. The superhero can also be seen swinging on the issue's cover, which displays a 10-cent price.

"This item is considered one of the holy grails of comic books, and is the issue that started Batman and really helped start the superhero craze," Goldin Auctions executive chairman and founder Ken Goldin told CNN. "Since this comic was issued, Batman has become more than just a character. He's truly evolved into a symbol that people look up to, which is why every serious collector would love to own this piece."

The copy that holds the public sale record for that issue had a CGC grade of 7. It was sold by Heritage Auctions.

Goldin said he believes the copy that his house is auctioning could beat that sale.

"Given the massive interest in the Dark Knight following the release of the incredibly popular new Batman movie, there is still a chance that this copy could eclipse the all-time record," Goldin said.

The sale is part of a larger auction that includes a 1996 Hummer owned by Tupac, an outfit worn by Prince and Jim Morrison's signed 1966 California driver's license.