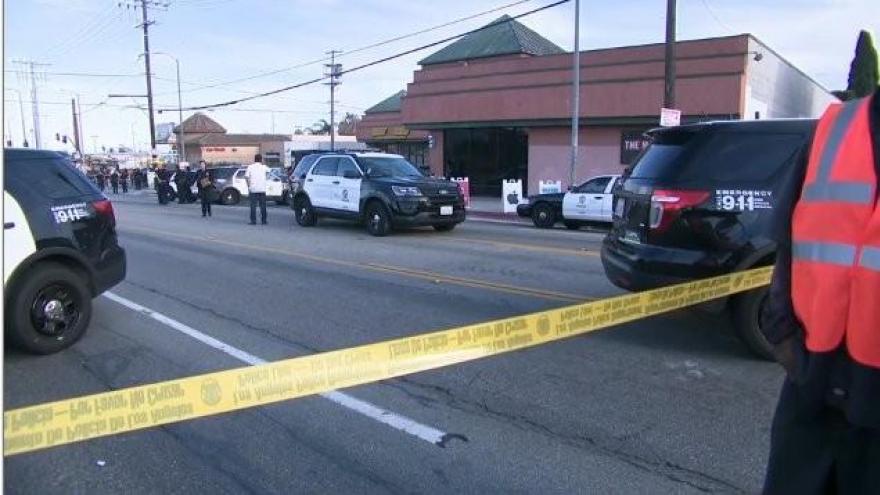 ***EMBARGO: Los Angeles, CA*** Police on the scene outside the artist's store in the Hyde Park neighborhood of Los Angeles Sunday afternoon.

(CNN) -- Rapper Nipsey Hussle died Sunday after a shooting in Los Angeles near a clothing store he owned, according to a high-ranking law enforcement official with the Los Angeles Police Department.

Two other people were injured in the shooting around 3:20 p.m., according to the department.

The shooting occurred in the area of Slauson Avenue and Crenshaw Boulevard.

All three victims were transported to a hospital, where one of them was pronounced dead, according to police. The other two were in stable condition, police added.

In a tweet, the department said it has no information about the suspect.

The rapper's last message on Twitter read: "Having strong enemies is a blessing."

In 2010, Hussle, 33, whose birth name was Ermias Davidson Asghedom according to IMDb.com, founded the record label All Money In, which he debuted with the release of "The Marathon," the rapper's fifth official mixtape. His 2013 "Crenshaw" release sold more than a thousand cassettes each priced at $100, according to his Press Atlantic Records biography.

The next year, he performed across the country in his Crenshaw Tour.

He made moves outside the music industry, too. Last year he launched the first Marathon Clothing smart store at 3420 W. Slauson Ave. in Los Angeles. He also owns The Marathon Agency, SC Commercial Ventures, Proud 2 Pay and All Money In No Money Out Records, according to Press Atlantic Records.

His Facebook says Hussle was "a devout member of the Rolling Sixty Crips," a national street gang that was founded in Los Angeles in the mid-1970s.

His page lists Ice Cube, Snoop Dogg and Tupac as some of his influences.

Hussle was nominated for best rap album at this year's Grammys, but lost to Cardi B.

Mark Ridley-Thomas, a member of the Los Angeles County Board of Supervisors who represents the southern part of the city, released a statement Sunday night saying his district mourned the loss of Hussle.

"Ermias Asghedom, known to us as the hip-hop artist Nipsey Hussle, was a father, businessman, entertainer, and inspiration to many," Ridley-Thomas said, urging his district to stay calm and reflect on the tragedy. "Our communities have lost too many young men and bright futures to the scourge of gun violence. For healing to occur, even from this terrible incident, justice must be sought through legal means, and community peace must be found."

Hussle had been scheduled to meet with LA Police Commissioner Steve Soboroff and LAPD Chief Michael Moore on Monday to discuss ways to stop gang violence, Soboroff said on Twitter.

"We (@LAPDChiefMoore and I ) were meeting, at the request of @NipseyHussle with him and @rocnation tomorrow at 4pm to talk about ways he could help stop gang violence and help us help kids. I'm so very sad," Soboroff tweeted.

After news of his death, dozens of celebrities expressed their shock and condolences on social media.

"My spirit is shaken by this," Rihanna wrote on Twitter. "Dear God may His spirit Rest In Peace and May You grant divine comfort to all his loved ones! I'm so sorry this happened to you."

Pharrell Williams wrote Hussle was about "something.. positive and for your community in every chance you had to speak.. and because of that You inspire millions.. millions who will uphold your legacy forever."

Rapper J. Cole tweeted that Hussle was a "legend"

"I respect and admire your career path and what you did for the neighborhood. My heart broke today when I saw the news. I'm praying for your loved ones," Cole tweeted.

Other artists, including Chance the Rapper, Meek Mill and Drake, also took to social media to say their final goodbyes, along with athletes Stephen Curry, LeBron James and Colin Kaepernick.

Clarification: The headline and article have been updated to reflect that Nipsey Hussle was owner of the clothing store near the site of the shooting.