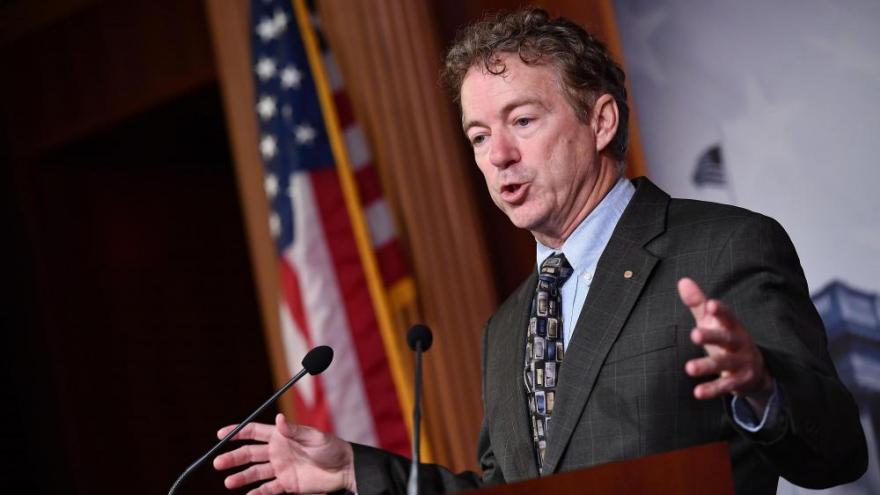 (CNN) -- The Senate tabled an effort by Sen. Rand Paul Tuesday to force a vote on the constitutionality of former President Donald Trump's impeachment trial, but the vote offered an indicator for how Republican senators -- who overwhelmingly voted for Paul's measure -- feel about the trial.

In order to convict Trump at his trial, at least 17 Republicans will need to vote with all Democrats when the trial begins next month. Significantly, Senate Republican leader Mitch McConnell sided with Paul in the vote -- a potential indicator that he agrees the constitutionality of impeaching a former President is in question.

Paul argued after the vote that the fact that 45 Republicans sided with him "shows that impeachment is dead on arrival."

"If you voted that it was unconstitutional then how in the world would you ever hope to convict somebody for this?" Paul asked, adding ,"45 of us, almost the entire caucus, 95% of the caucus, voted that the whole proceeding was unconstitutional. This is a big victory for us. Democrats can beat this partisan horse as long as they want -- this vote indicates it's over, the trial is all over."

Even those Republicans who voted against Paul's measure -- including Collins -- said Tuesday's vote was a sign of the eventual outcome of the trial.

"Do the math," she said. "I think it's extraordinarily unlikely that the President will be convicted."

Still, the trial will offer both sides a chance to make their case, and some lawmakers who voted with Paul left open the idea that they still could vote differently next month.

John Thune, the Senate minority whip, argued that the vote won't bind lawmakers after the trial gets into full swing.

"It was a question on the constitutionality of it. I don't think it binds anybody once the trial starts," he said, adding, "But I think most of us thought that the threshold issue of whether or not you can remove as the Constitution suggests somebody who is no longer in office -- I think most of our members concluded that from a constitutional standpoint is on really shaky ground."

Republican Sen. Rob Portman, who recently announced he won't seek reelection in 2022, said he voted with Paul because he thinks there should be a debate on the constitutionality of an impeachment trial for a former president.

"I want to hear it debated," Portman told reporters. "The vote to table is inconsistent with that, you know, but I've not made my mind up. I'm a juror. And I mean I've the same position Mitch McConnell has. He didn't do that to be tabled either, even though he wants to have, you know, a fulsome discussion."

The Democratic-led House has already voted to impeach Trump, charging him with incitement of insurrection for the attack on the Capitol that left multiple people dead. But two-thirds of the Senate would have to vote to convict Trump after a trial, an extremely high bar to clear.

The Senate vote on Tuesday effectively put senators on record as to whether they believe a trial of a former President is constitutional. Given the limited language in the Constitution on impeachment, legal experts disagree about whether the Senate can convict a former president. But Democrats have pointed to legal scholars on both ends of the political spectrum who say a trial is constitutional.

Democratic Sen. Dick Durbin said earlier on Tuesday of the possibility Paul could force the vote, "he has a wealth of very unusual ideas."

Paul said in a floor speech ahead of the vote, "I want this body on record, every last person here: Is this how you think politics should be?"

"Democrats insist on applying a test of incitement to a Republican that they refuse to apply to themselves," he said. "I want Democrats to raise their hands if they have ever given a speech that says 'take back,' 'fight for your country,' who hasn't used the words fight figuratively?"