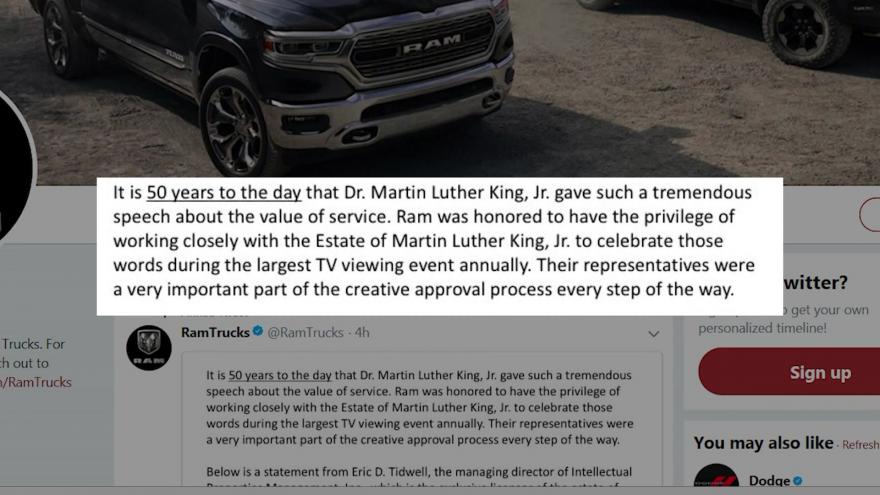 NEW YORK (AP) — A Ram truck ad that used a speech by Martin Luther King, Jr., is drawing a backlash.

The ad shows people doing service-oriented tasks set against audio of King's speech, which urges people to be "great" by serving the greater good rather than being successful. It was supposed to highlight the volunteer program Ram Nation.

But it was criticized by viewers and ad experts alike for forging too tenuous a connection with the civil rights hero.

On Twitter, most people expressed the idea that using King's speech to "sell trucks" crossed a line between a heartfelt message and exploiting emotions just to push a vehicle.

"They pushed it over the edge," said Kelly O'Keefe, a professor at Virginia Commonwealth University's Brandcenter. "You wanted to root for it because the cause is good, but it just didn't end up fitting the brand, so you ended up feeling a little bit manipulated."

"The use of MLK to promote Ram trucks strikes many people as crass and inappropriate," said Tim Calkins, a marketing professor at Northwestern University.

Watching at home, some viewers expressed distaste for the ad as well.

"I liked being reminded of Martin Luther King's speech (but) I'm not sure it was fitting for a truck commercial," said Kimberly Stites, who was watching the game in Gretna, Nebraska. "I would have liked it better if they had said something like, 'This reminder of all that we can be brought to you by ....'"

Fiat Chrysler said in a statement that it worked closely with the King estate on the ad.

The firm managing King's intellectual property, Intellectual Properties Management, said in a statement that it approved the ad because it embodied King's philosophy.

The ad is not the first one to use a King Speech. Telecom Alcatel used King's "I Have a Dream" speech in an ad that was also approved by IPM.

That ad shows King giving his most famous speech to an empty Mall in Washington D.C. to illustrate the idea that "before you can touch, you must first connect."