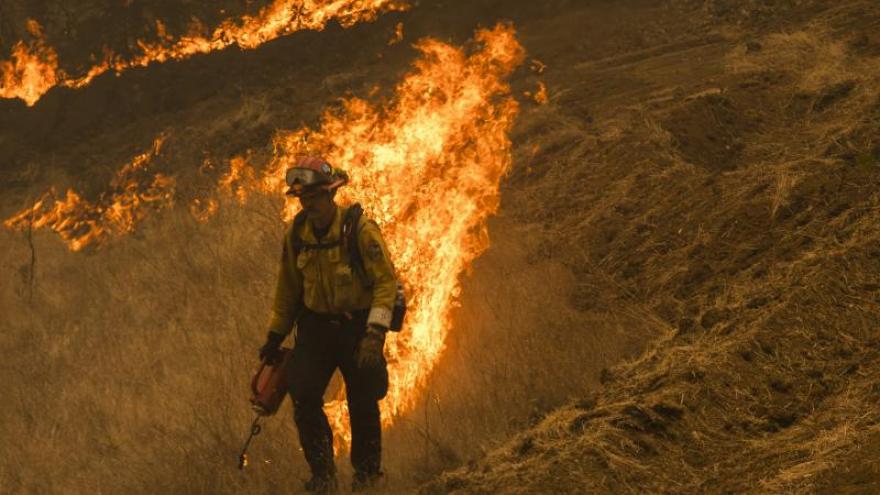 A firefighter ignites a controlled burn during the Glass Fire near Calistoga.

(CNN) -- Rain is on the way this week to Northern California, providing the possibility of some much-needed relief for areas ravaged by wildfires.

But the fast-moving flames may get a boost from hot, dry weather before the showers and cooler temperatures arrive.

Record breaking hot weather, low humidity and wind have fueled California wildfires during this year's historic fire season, which has resulted in the deaths of 31 people and burned more than 4 million acres.

That's 26 times more than the number of acres burned in same period of 2019, according to Cal Fire, and is greater than the area of Connecticut.

Relief could come as a long-running drought is forecast to end Wednesday.

There have been more than 8,300 wildfires in California this year. More than 16,600 firefighters continue to battle 23 major wildfires as of Monday afternoon, according to Cal Fire. The blazes have destroyed least 8,687 structures and air quality in the region has been an issue.

The conditions resulted in 27 new wildfires popping up Saturday. Firefighters were able to gain the upper hand and bring full containment to all of the new blazes, Cal Fire said.

On Sunday, temperatures remained warm but have been decreasing to become more seasonal, the update said.

Cooler temperatures and rain could help fire crews tending to the Zogg and Glass fires, which have been burning for more than a week in the northern part of the state.

"A front is pushing through the Pacific northwest today which is bringing cooler, drier air," CNN meteorologist Michael Guy said.

Following that, a storm system is expected to approach from the Pacific late Wednesday and Thursday, Guy said. A light rain could reach northern California mid-week, Guy said, with heavier showers on Friday, lasting through at least the following Tuesday.

"Rain through this period will impact areas from San Diego to Seattle -- however the bulk of the rain will occur from the Mendocino area in Northern California to the Canadian border," Guy said.

"This should be something to help the firefighters contain the blazes."

The deadly Zogg Fire in Shasta and Tehama counties has burned 56,305 acres and is 76% contained as of Monday afternoon, according to Cal Fire. Four people have died as a result of the vegetation fire that started September 27. The cause is still under investigation.

"There is still potential for active fire due to the hot and dry temperatures that have occurred over the past 2 months," according to an incident update.

One inmate firefighter remains hospitalized from an injury on Friday, fire officials announced over the weekend. The fire has killed four people.

Investigators are also working to determine the cause of the Glass Fire, which is burning in Napa and Sonoma counties. The blaze has grown to 65,580 acres since igniting September 27. It is 30% contained, according to the Cal Fire incident website.

"Overnight, the Glass Fire burned actively due to poor humidity and above average temperatures," said an incident report.

Residents are slowly returning to their homes, but Cal Fire warns them to be vigilant.

Among the people who have evacuated the Glass Fire is Rachel Oretega, who told CNN affiliate KGO she was anxious to return to her house in Calistoga.

"I'm stressed out at the most, keeping me going is knowing our home is still there," Ortega told KGO.

Other evacuees have not been as fortunate. Brian Yates told the news station his family's home was reduced to rubble in the Glass Fire, the affiliate reported.

"It roared through taking everybody's place," Yates told the station.

His daughter Caitlin Yates Olsen said the fire had destroyed all her family's possessions and memories, according to KGO.

"All the family photos, all the furniture gone, incinerated," Yates Olsen told the affiliate, noting that while their stuff was in ashes, her family was OK. "So everything is gone, but I still have my dad."