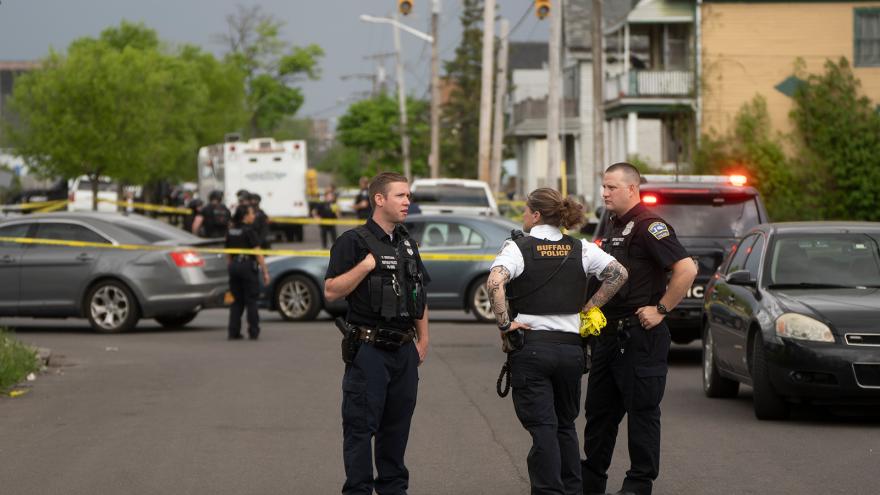 (CNN) -- Recorded emergency radio transmissions of first responders in Buffalo on Saturday afternoon reveal what they were dealing with in the chaotic first moments of reports of an active shooter at the Tops Friendly Markets store.

Police and fire department radio traffic from the shooting obtained and reviewed by CNN showed how the shooting unfolded, as responders asked the dispatcher to "send out as many cars as you possibly can" after reporting "two people down" at the location.

A civilian reported a police officer was shot north of Jefferson Street, where the supermarket is located, the recording indicated.

The officer was later identified as Aaron Salter, a former Buffalo police lieutenant working as a security guard at the market. He died from his injuries, according to Buffalo Mayor Byron Brown. The security guard "fired multiple shots at the suspect," but the suspect's tactical gear protected him from the officer's shots, according to Buffalo Police Commissioner Joseph Gramaglia.

Authorities say when the suspect arrived at the store around 2:30 p.m., he was heavily armed, wearing a helmet, and had a camera livestreaming his actions. Erie County District Attorney John J. Flynn said the suspect, who was using an assault weapon, shot four people outside of the grocery store, three fatally. When he entered the store, he exchanged fire with the armed security guard and began shooting at customers in the store, Gramaglia said.

Six trucks were already at the scene before three people were reported "down on the ground," in the recording. The responders informed the dispatcher the suspect "might be an individual in body armor" who was being "cornered" by police officers.

The dispatcher is heard in the recording asking for additional equipment to the Tops market for an "active shooter mass casualty incident" with multiple possible victims.

Inside the store, nine people were shot before the suspect was apprehended by police, with the guard and six others dying from their wounds, according to Flynn's statement.

"I just informed 911... what was going on. Officers on the way, officers over here on scene... I notified 911 to contact homicide. We have bodies down here," one rescue worker told a dispatcher.

One emergency responder asked for more officers inside the supermarket "because we have numerous bodies" and expended shells, adding "we need to keep the evidence secure."

Within 20 minutes of the gunman opening fire inside the store, police had a suspect in custody. Shortly afterward, officers reported three people down inside and two casualties outside, the radio traffic recording showed.

New York Gov. Kathy Hochul said an AR-15 used in the shooting was purchased legally in a gun store in New York state, but was illegally modified with a high-capacity magazine.

Gramaglia said Sunday family notifications have occurred after the shooting, "so that they can begin the grieving process."

They also told the dispatcher to "make sure that when the ambulance comes inside, uh, that they don't disturb the scene, anybody that's already deceased, we need to leave them there until homicide comes to the same place. We have to maintain the integrity of this thing," the recording indicated.

Of those shot in the attack, 11 were Black and two were White, officials said. Two people remain hospitalized in stable condition, a spokesperson for Erie County Medical Center told CNN.

The US Department of Justice is investigating the mass shooting "as a hate crime and an act of racially-motivated violent extremism," according to a statement from US Attorney General Merrick Garland.

Investigators are reviewing a 180-page purported manifesto posted online in connection with the shooting, two federal law enforcement sources told CNN. The author of the document, who claims to be Payton Gendron, confesses to the attack and describes himself as a fascist, a White supremacist and an anti-Semite.