Race against time: Inside ATF's efforts to find shooters before they strike again 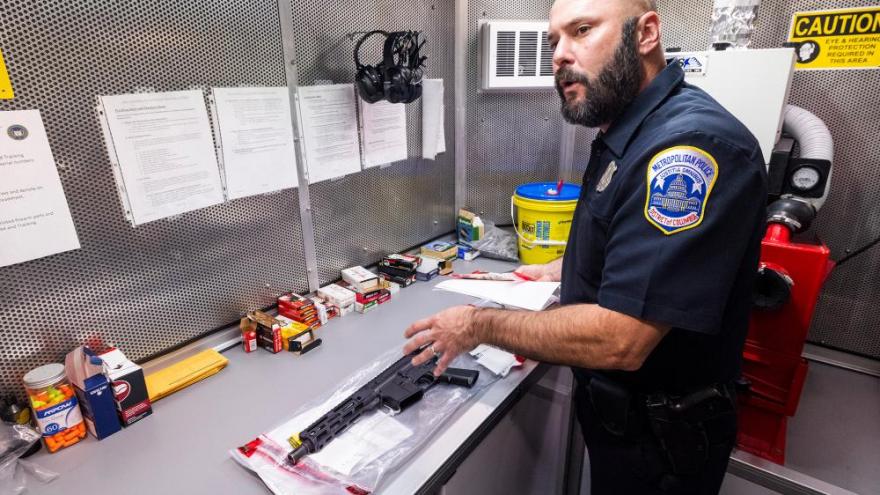 Wayne Garrish, a detective with DCs Metropolitan Police Department, discusses a privately made AR-15 style weapon inside the ATF mobile command center, which provides investigators with ballistic processing at crime scenes, on July 22 in Washington, DC.

"The guns were shooting all over," one eyewitness told CNN's Jim Acosta. "It sounded like a war zone."

Just days before, a shooting outside a Nationals baseball game caused widespread panic throughout the stadium as frightened fans bolted for safety.

Seemingly endless gun violence night after night in Washington DC has terrorized countless innocent victims, including 6-year-old Nyiah Courtney, who was shot and killed last month in a drive-by shooting as she rode her scooter.

Robert Contee, chief of the Metropolitan Police Department, has had enough.

"People are really mad as hell right now," Contee said, addressing the city's crime surge. "And I don't blame them. I am, too."

Contee's anger and frustration is felt by his partners in federal law enforcement. That's part of the reason why DC's police force and special agents from the Bureau of Alcohol, Tobacco, Firearms and Explosives (ATF) have joined forces to surge resources towards stopping the next shooting.

"I live here. I want to see a safe city as well," said ATF special agent in charge Charlie Patterson. "We are very concerned about the level of violence that's occurring here in the city."

The new initiative is one of five ATF efforts underway nationwide -- the others are located in Los Angeles, Chicago, San Francisco and New York City -- in cities experiencing significant gun violence.

"We want to understand where those guns are coming from and then go after both the sources, as well as the markets where they're being used," US deputy attorney general Lisa Monaco told CNN.

Two key tools the ATF is bringing to the fight against DC's gun epidemic: manpower and data.

ATF and local DC law enforcement have long worked together on gun crime investigations, but the new initiative includes a dedicated unit of personnel from each agency now working side by side.

The agency allowed CNN access to the nerve center of its new partnership with DC police, where ballistic experts are working to identify the owners of guns and shell casings recovered at crime scenes.

The ATF Crime Gun Intelligence Mobile Command is a state-of-the-art laboratory on wheels. Currently positioned in southeast DC, it serves as a one-stop processing center for law enforcement in the district. It allows investigators to tap into the ATF's National Integrated Ballistic Information Network -- a clearinghouse of gun crime information.

The start of the ballistic analysis process is fairly straightforward: An officer who has recovered a gun from a crime scene pulls up to the mobile command center and hands the evidence to one of the task force unit members.

After the gun is catalogued into evidence, it is test fired in a fortified section at the rear of the mobile command center.

As our crew arrived, task force officer Michael Gerrish of the Metropolitan Police was preparing to test-fire a 9-mm Glock pistol recently recovered in a shooting.

With eye and ear protection in place, Gerrish activates an exhaust fan that will help expel chemical gases from the firing of the pistol, and switches on a series of red strobe lights that flash throughout the mobile command center as a warning to other team members that a test-fire is imminent.

"I only load one round at a time for safety, just in case something happens with this gun," Gerrish said. Unlike firearms carried by law enforcement, which are meticulously maintained and regularly serviced, Gerrish doesn't know if the crime gun he is about to fire might malfunction and potentially cause injury.

With the muzzle of the Glock placed inside a metal collection tube, Gerrish presses the trigger. As the round is fired, the weapon ejects a brass ammunition shell casing, which could hold the vital clue to locating the gun's owner.

'Similar to a fingerprint'

With the shell casing collected from the crime gun, the next step is all about forensic science.

In another section of the ATF mobile center, examiners sit near an array of specialized equipment used to analyze ammunition casings either test fired from a gun inside the truck, or casings collected directly at crime scenes.

One analyst wipes down a sample shell casing and places it inside a large machine resembling a Keurig coffee maker.

The headstamp refers to the indentation a gun's firing pin leaves on the end of a shell casing as a bullet is fired. Extraction marks are the result of metal-on-metal friction as a gun ejects an empty ammunition cartridge after the trigger is pressed.

"What we've discovered over the years is that firearm shell casings, they all have unique characteristics, similar to a fingerprint," Ward said. "They're all very unique."

It is the unique nature of the marks a weapon leaves behind on a shell casing that will help authorities locate its owner.

Once the examiner inside the mobile center uploads the digital images into the ATF database, another examiner hundreds of miles away at an agency facility in Alabama begins comparing the images to other shell casings recovered from crime scenes. If a computer algorithm identifies a potential match, Ward says, the examiner will overlay the two images to further compare each shell casing's microscopic features.

A race against time

ATF ballistic unit task force members say matching a gun to multiple crime scenes is key to helping track down its owner. If forensic examiners can place the same weapon as being used in different locations, law enforcement officers can then query other sources of information, such as informants, witnesses and surveillance video to zero in on a suspect.

It is the repeat nature of DC's gun violence epidemic that has authorities so concerned. The MPD says 25% of firearms and 60% of shell casings recovered from crime scenes last year were linked to other shootings.

"Studies have also shown us that individuals will graduate to pulling the trigger in dangerous crimes or homicides," Benedict told CNN outside the ATF mobile lab. "They may start out using that gun and practice destruction of property, stop sign shootings, vehicle shootings. They may graduate to an armed carjacking or an armed robbery. And then all of a sudden that gun is being discharged and lives are being lost."

"Some of our best detectives in the agency are assigned over to the ATF office," he said. "They have assigned some of their best agents."

He says ultimate success for the new unit will be measured by the number of shootings experienced in the district, as authorities work to find shooters before innocent people are killed or injured.

MPD and the ATF are laser focused, Benedict says, on identifying the city's "drivers of violence, getting them off the street [and] keeping them from going out to commit other acts."