R. Kelly convicted of racketeering by a federal jury in New York 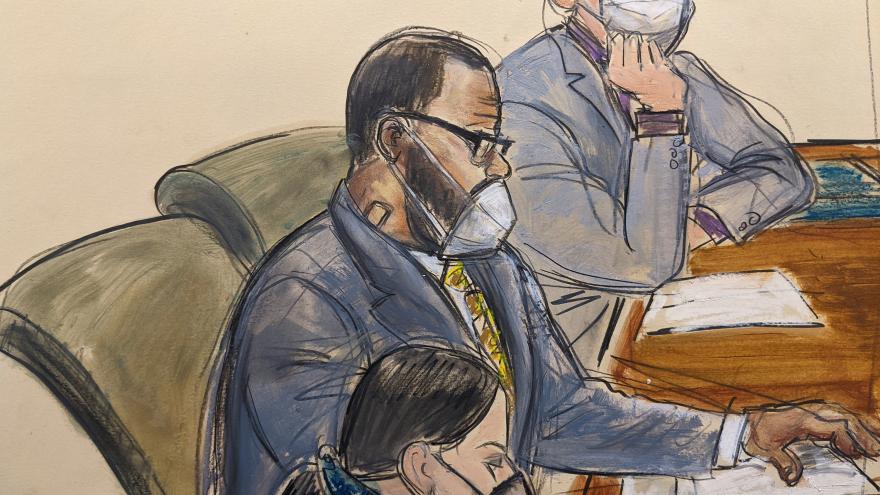 (CNN) -- R. Kelly has been convicted of racketeering by a federal jury in Brooklyn, the US Attorney's Office for the Eastern District of New York said Monday.

Kelly has been on trial in New York for one count of racketeering, with 14 underlying acts that included sexual exploitation of a child, kidnapping, bribery and sex trafficking charges. He was also charged with eight additional counts of violations of the Mann Act, a sex trafficking law.

The jury, made up of seven men and five women, began deliberating on Friday, September 24.

In all, Kelly could face decades in prison if found guilty.

The verdict comes 13 years after Kelly, whose full name is Robert Sylvester Kelly, was acquitted of child pornography charges at an Illinois state trial.

Fifty prosecution and defense witnesses took the stand during the five-week trial, including victims who were identified as "Jane Does" in Kelly's indictments. There were 45 prosecution witnesses.

Jurors heard from multiple witnesses who were present at her marriage to Kelly on August 31, 1994, when he was 27 and she was 15. Prosecutors showed copies of the couple's marriage license application, which listed Aaliyah's age as 18 at the time of their wedding, as well as their marriage license and marriage certification.

Kelly's former tour manager, Demetrius Smith, testified reluctantly that he bribed a worker at a welfare office in the Chicago area to create a welfare ID for Aaliyah.

"I made her (the welfare office worker) an offer and she took the money," Smith testified. "I gave her $500."

While the ID did not list Aaliyah's date of birth, an Illinois official testified September 15 that, generally, a person has to be at least 18 to obtain that particular type of ID.

Nathan Edmond, a minister who married the two, spoke publicly for the first time about the marriage while testifying September 1 said he met the couple the day he married them.

"I didn't think it was anybody special. I didn't understand it at all," Edmond testified.

Jurors also heard from a woman who identified herself only as Stephanie, who said she met Kelly at an event in Chicago in 1999 when she was 17, and that he eventually invited her to his studio.

"I remember him asking me my age," Stephanie testified. "When I said I was 17, he said it was fine."

Stephanie testified that Kelly sexually abused her when she was 17, and recorded them having sex. He paid for her travel to Florida to meet him on her 18th birthday and she stopped speaking with him shortly after the trip. She described fearing his angry outbursts, saying he would yell at her in public places.

A former radio intern who identified herself as Sonja testified September 9 that Kelly invited her to travel to Chicago to interview him at his studio in 2003 when she was 21 and that once she arrived, an employee put her in a room that Sonja quickly realized was "locked from the outside." She said she was kept in the room for several days, occasionally let out to go to the bathroom and shower.

"The door was locked. I wanted to get out," Sonja testified.

Sonja testified she lost consciousness after eating her first meal in days and saw Kelly adjusting his pants when she woke up. She testified that she believed he sexually assaulted her when she was unconscious.

"I was sexually assaulted," Sonja testified. "There was something in me that wasn't wanted."

Testimony about physical and sexual abuse

Another witness, Jerhonda Pace, testified she met R. Kelly when she went to watch his 2008 Illinois state trial on child pornography charges when she was in high school. She testified that he invited her to his home a year later, when she was 16, and that he sexually abused her.

But she testified that during their first sexual encounter, she told him her real age. Pace said Kelly told her she should "continue to tell everyone she was 19 and to act 21." She said Kelly took her virginity and that the two had a six-month sexual relationship that ended in early 2010.

A woman who testified under the pseudonym Jane said she was Kelly's girlfriend for five years, defended him in an interview with CBS's Gayle King shortly before his arrest on federal charges, and continued to be by his side for months after his arrest.

Jane testified she met Kelly in April 2015 when she was a 17-year-old high school student and that he invited her to audition for him at a hotel in Florida. She testified that she told Kelly she was 18.

She said she began traveling to meet Kelly at shows he was performing around the country, and testified that Kelly told her he wanted to teach her "musical techniques to better me as a singer." Jane said she would reach out to Kelly's assistant to book travel, sharing her legal date of birth with him. She testified that Kelly began having sexual intercourse with her in May 2015.

"We had sex almost every day," she testified. "Every time we had sex, he would record it."

Jane testified that Kelly began recording them having sex when she was 17, using one of multiple iPads he carried with him in a backpack.

Jane testified that she became infected with herpes after having sex with Kelly. She also testified that, while 17, Kelly would regularly spank her, leaving bruises and making her skin tear. She testified the spankings led to beatings, and she said Kelly would hit her all over her body and once hit her with a shoe.

"I was trying to run from him and fight back but I was no match," Jane testified.

At the end of the summer of 2015 she told Kelly she would need to go back to Florida for her senior year of high school and confessed that she was 17.

Jane testified she became pregnant in 2017 and that Kelly pushed her to have an abortion.

A woman who identified herself as Faith testified she met Kelly at a San Antonio concert in 2017. She said Kelly handed her a piece of paper with his phone numbers and that they began texting, then talking.

She said Kelly flew her to New York for a show, came to her room early one morning and forced her hand onto his penis. Faith testified that Kelly recorded them having sex. When she asked him whether he was going to use a condom, he replied, "I don't need a condom." He did not tell her that he had herpes, Faith testified, and she said she was diagnosed with herpes shortly after their relationship ended in 2018.

Faith testified that during a trip to Dallas, she and a girlfriend named Joy were kept in a van while Kelly and others were in cigar bar for hours. When she needed to pee and felt like she was overheating, she said she tried to open the door but could not.

Kelly's legal problems are not over

Kelly still has legal battles after this trial. In the Northern District of Illinois, he faces more federal charges including child pornography and obstruction charges. He also faces criminal charges in Minnesota, for two counts of engaging in prostitution with a minor, and Illinois state charges for aggravated criminal sexual abuse.

He has pleaded not guilty to all charges and denies any wrongdoing.

The 13-count indictment released in July 2019 in the Northern District of Illinois accused Kelly of videotaping himself having sex with at least four girls younger than 18 beginning in 1998. A few years later, after Kelly learned that some of those videos were missing from his "collection," he and others began paying "hundreds of thousands of dollars" to several people to recover them, the indictment says.

Also in 2019, a grand jury in Cook County, Illinois, indicted Kelly on 10 counts of aggravated criminal sexual abuse involving four alleged victims, three of whom were listed as younger than 17.

In August 2019, the Hennepin County Attorney's Office in Minnesota announced Kelly was charged with two counts of prostitution with a person under 18. According to the criminal complaint, a woman said the incident happened in 2001, when she was 17.