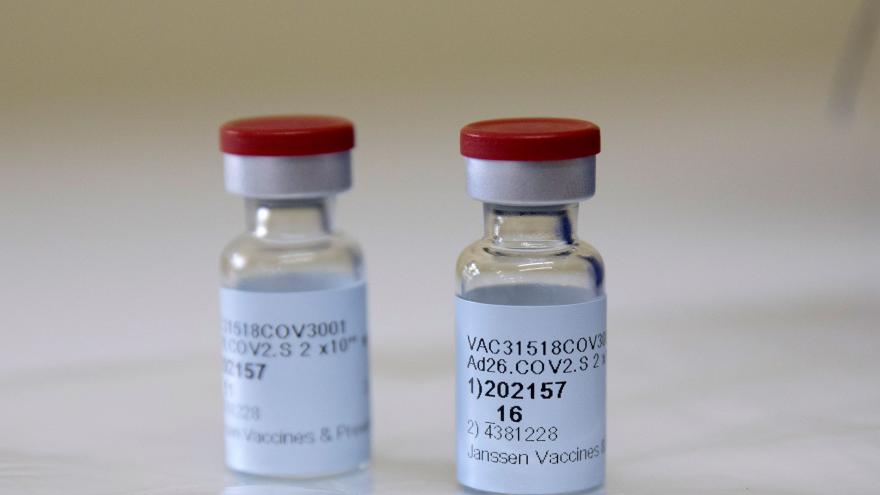 (CNN) -- Johnson & Johnson says that it has 4 million doses of its Covid-19 vaccine ready to ship "immediately" once it receives emergency use authorization, which could happen this week. But as the decision nears, it's unclear when or where those doses will be delivered.

During a briefing on Wednesday, White House Covid coordinator Jeff Zients said the J&J vaccine's distribution would be similar to the current allocations process across jurisdictions, pharmacies and community health centers. When asked earlier in the week, the White House did not disclose its plans, although an administration official said they have worked closely with the company to formulate a distribution outline.

"If authorized, we are ready to roll out this vaccine without delay," Zients said Wednesday.

But federal officials have also expressed disappointment that fewer doses than expected will be ready. Zients said about 2 million doses will go to states after the vaccine is authorized, and the remaining amount will be allocated to pharmacies and community health centers.

States and professional associations say they would like some direction about the coming doses but they haven't received detailed information yet.

One health industry source told CNN the lack of information has made it difficult for providers to prepare for the vaccine -- unsure if they should be building doses into their electronic medical records or educating their clinicians on how to administer the vaccine.

Still, some cities and states are making big plans for how they will administer the single-dose vaccine -- many focusing on their most vulnerable communities -- and they acknowledge they don't know how many doses to expect.

"I think Johnson & Johnson is going to be the difference maker because it's single dose, easier refrigeration standards. I think this is what will supercharge our effort," New York City Mayor Bill de Blasio said during a news briefing on Tuesday.

"In terms of getting very precisely what we expect for New York City, I'm still waiting to hear that report," he added. "But I'm very hopeful about this new development."

When the vaccine could be available

Despite the excitement and anticipation, the Johnson & Johnson Covid-19 vaccine has several steps to go before it's available.

The FDA's Vaccines and Related Biological Products Advisory Committee meets on Friday to review data on the vaccine and decide whether to recommend it for emergency use authorization in adults 18 and older.

Once the vaccine is authorized, the US Centers for Disease Control and Prevention Advisory Committee on Immunization Practices, or ACIP, makes recommendations to the CDC on how the vaccine should be used, such as among what age groups and on what type of schedule. An emergency meeting of ACIP is scheduled for February 28 and March 1.

Typically, the CDC director accepts the committee's recommendation. Shortly after that, the vaccine can be distributed, and can start going into arms.

What everyone wants to know is where the federal government will send those doses, and who they'll be steered toward.

"We're hoping that ACIP will provide some guidance on the most effective use of the J&J one dose vaccine," Claire Hannan, executive director of the Association of Immunization Managers, wrote in an email to CNN on Tuesday.

"States are looking for guidance for use of the vaccine in populations which might really benefit from the one dose series complete, such as transient populations," Hannan said. "We aren't hearing much on this."

Asked Monday about their plan to distribute the J&J vaccine, White House officials said they were waiting for FDA authorization.

"So I think we're going to wait on that until after the FDA does its work and then after the ACIP does its work, all consistent with our philosophy of letting the science go first," Andy Slavitt, senior adviser of the White House coronavirus response, said during a briefing on Monday. "Once we understand what the scientific community has to say, we will then be in a position to answer, I think, the very relevant questions that we need scientists' advice on. And again, this is the President's directive to let science lead, and then we will rapidly follow that up with a strategy, both distribution and targeting and otherwise, that reflects that."

The chief medical adviser to the White House, Dr. Anthony Fauci, said that it is possible the FDA may find details in the trial data that may give federal leaders a better sense of how the vaccine should be distributed.

"In the data there may be hints about just how this would be used most appropriately and most effectively. When we find that out, then the policy of the distribution would become much more scientifically based," said Fauci, director of the National Institute of Allergy and Infectious Diseases.

While J&J has been manufacturing the vaccine as it was tested, there are still a limited number of doses.

A White House official confirmed this week, "If an EUA is issued, we anticipate jurisdictions will get an allocation of around 2 million doses of J&J supply next week."

On Tuesday, Johnson & Johnson's Dr. Richard Nettles specified the company has 4 million doses ready to ship immediately, and it plans to "deliver enough single-doses by the end of March to enable the vaccination of more than 20 million Americans," according to remarks delivered before a House Committee on Energy & Commerce subcommittee.

The US government has ordered 100 million doses to be delivered by June, and the company says it can meet that commitment.

"What we're seeing is that instead of being front loaded with a number of doses that are coming out, it very likely will be back loaded," Fauci said on CNN on Tuesday.

"It's just a matter of what happened with their production capability and how they are now going to be revving up, and then soon after that, they're going to have a lot of doses," he said. "But, it's not going to be front loaded."

'An orange with two apples'

The J&J vaccine rollout was never going to be the same as the Moderna and Pfizer vaccines launch. It's different from the earlier mRNA vaccines and coming at a different time in the pandemic.

"The Moderna and Pfizer were so similar," said Daniel Polsky, the Bloomberg Distinguished Professor of Health Policy and Economics at Johns Hopkins University. "Now we have kind of an orange with two apples. So how do you manage anything? Can you give people choices? What do you send where and why and what are the implications of people getting those?"

The earlier vaccines were the first; everything was new, and doses were more limited than they are now. They tested new distribution networks and required complex cold storage. Vaccines were directed toward the most vulnerable, going directly to hospitals and long-term care facilities.

Now there are more places to send vaccines and more people who are eligible to get them. The single-dose Johnson & Johnson vaccine developed by Janssen, the company's vaccine arm, should be easier to distribute.

Polsky thinks Johnson & Johnson is doing its job. It created a vaccine and communicated what it does. Now, federal and local governments will need to "connect the dots" and determine where the vaccine fits best - and that could be bumpy for this vaccine and others, Polsky said.

"The J&J and whatever else follows, everything you add, adds to the complexity of distribution and delivery and communication and all that is, this exponential function of what you are managing," Polsky said. "A state or agency, whoever has the authority to decide what goes where, how they make those decisions, I think that's going to be really complex.

"And come on, it doesn't even have an approval yet."

Around the country, state public health departments were eager to be able to use the vaccine -- but thin on specifics of when they expect to receive doses and how many.

The Texas Department of State Health Services said Monday it had not been given any information about the J&J allocation timeline or any other details about the vaccine.

Arkansas' department of public health said Tuesday it is still in the planning stages right now, but won't have details to share until it knows more about the characteristics of the vaccine and it is authorized by the FDA.

Maryland Gov. Larry Hogan said Tuesday that White House officials suggested an EUA could happen as early as Friday and shipments of an initial 2 million doses could begin soon after.

"They didn't commit to next week but they said it could happen as early as next week," Hogan said, noting that Maryland typically receives about 2% of the nationwide vaccine supply.

Some cities, such as New York, have plans in place for the Johnson & Johnson's Covid-19 vaccine rollout, but they still do not know how many vaccine doses they will be allocated.

As soon as New York City receives doses of the vaccine, the city plans to start an initiative in which medical personnel will vaccinate homebound older adults in their apartments. The initiative is part of a larger effort to expand vaccinations for seniors.

"The big piece we want to get to is the, literally, in-home vaccination of folks who cannot leave their home. That really requires a Johnson & Johnson vaccine," de Blasio, the city's mayor, said during a news briefing on Tuesday. As a single-dose vaccine stored at refrigerator temperatures, the Johnson & Johnson vaccine may be easier to transport for such in-home vaccination efforts.

De Blasio said that the Johnson & Johnson vaccine will make a difference in New York City, should it receive an emergency use authorization -- but there are still some questions left to answer, specifically around supply.

"Clearly supply continues to be the single most important issue and that supply is dictated by the federal government and then, of course, by the manufacturers themselves," Dr. Jay Varma, senior adviser for public health at the mayor's office, said during Tuesday's briefing.

"The J&J vaccine is just being considered this week in front of the FDA, so we're looking forward to seeing the data -- both the data that's analyzed completely by J & J because all we have up until now was the press release, and second, the independent analysis that's done by the FDA," Varma said. "The next big challenge becomes the one that we've been talking about all the time, which is supply, and of course we're kind of at the whims of what the federal government is able to allocate to New York City specifically, as well as of course what the manufacturers can actually produce themselves."

"With the Janssen vaccine being a one-dose vaccine, it's good for those types of mass vaccination sites. We don't have to schedule people for a second clinic to come back and get a second dose," Sherman said. "The beauty of putting this in our larger mass vaccination sites is that people will have the choice."

Sherman added that the ACIP report on how the vaccine will be recommended for use will help inform the state's planning. They'll also need to know the initial number of doses that will be allocated for the state and how soon those doses may arrive. That remains unclear.