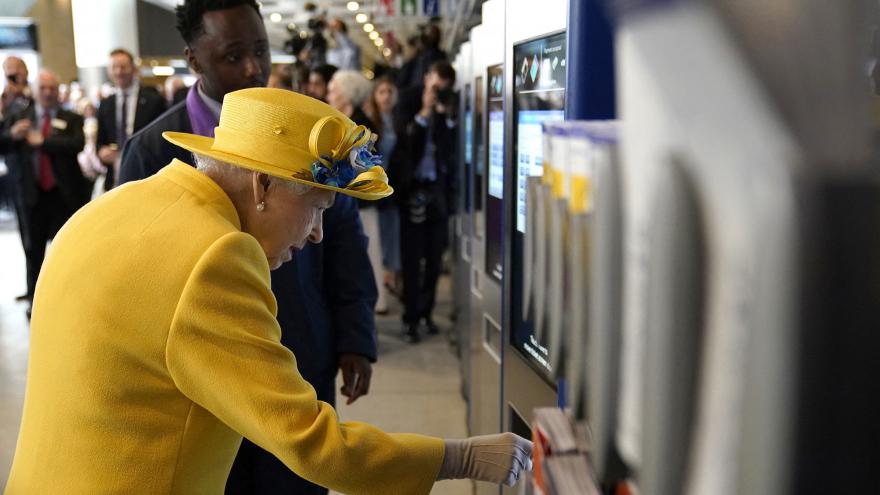 (CNN) -- Britain's Queen Elizabeth II made a surprise public appearance at the opening ceremony of a long-awaited train line in London on Tuesday.

The monarch, walking with a stick, wore a bright yellow outfit and hat at Paddington station, in west London, to open the Elizabeth line, which is named in her honor.

She was given a pre-paid Oyster travel card at the event on Tuesday, but did not use the train line herself.

The Queen attended with her son, Prince Edward, and was welcomed by British Prime Minister Boris Johnson and London mayor Sadiq Khan.

The 96-year-old monarch has been suffering from mobility issues and canceled several appearances in recent months, including the opening of Parliament last week.

Opening Parliament is a key constitutional responsibility and can't happen without the monarch. The Queen had to delegate that responsibility to Charles, Prince of Wales and William, Duke of Cambridge, who are counsellors of state.

The Elizabeth line, known as Crossrail when it was under construction, has been built on a far grander scale than the city's existing "Tube" lines. The first stage opens to the public on May 24.

The 62-mile network is built around a core consisting of 26 miles of brand-new tunnels through central London, burrowed with incredible precision under one of the most densely developed cities in the world.

At the height of construction, Crossrail was Europe's biggest engineering project.

The twin tunnels, 20 feet in diameter and up to 40 meters (130 feet) deep, weave around building foundations, London Underground tunnels and countless other structures and utilities.

Pre-pandemic projections forecast that around 200 million passengers a year were expected to use the Elizabeth line when it is fully open, but that number has been thrown into doubt by rapidly changing work patterns.