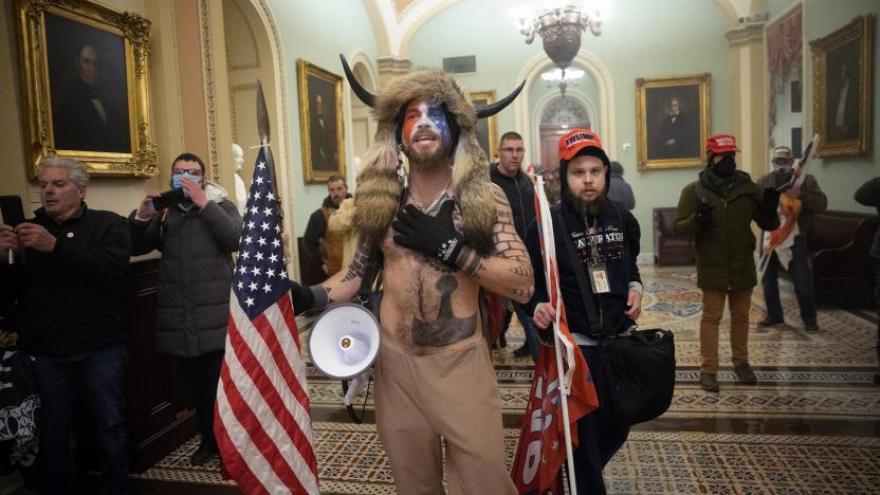 Jacob Chansley, the so-called "QAnon Shaman," who stormed the US Capitol in a horned bearskin outfit pleaded guilty Sept. 3 to a felony for obstructing the Electoral College proceedings on January 6.

(CNN) -- The so-called "QAnon Shaman" who stormed the US Capitol in a horned bearskin outfit pleaded guilty Friday to a felony for obstructing the Electoral College proceedings on January 6.

The defendant, Jacob Chansley of Arizona, is a well-known figure in the QAnon movement. He went viral after the January 6 attack because of the bizarre outfit he wore while rummaging through the Capitol. He made his way to the Senate dais that was hastily vacated earlier by Vice President Mike Pence -- someone Chansley falsely claimed was a "child-trafficking traitor."

He pleaded guilty Friday during a virtual hearing in DC District Court. The guilty plea was made as part of a deal with prosecutors, and it was accepted by District Judge Royce Lamberth.

The case has seen plenty of twists and turns: Chansley went on a hunger strike in February as part of a successful bid to get organic food in jail. He gave a jailhouse interview in March that was later rebuked by the judge in his case. And his attorney insulted people with disabilities in May, in what he said was a ploy to draw attention to mental health issues in the legal system.

Chansley was originally charged with six federal crimes. He pleaded guilty to one of the most serious charges and could face a maximum of 20 years in prison, though his lack of a criminal record means he'll likely receive much less. As part of the plea agreement, Chansley agreed to pay $2,000 in restitution for damage to the Capitol. He could also face a fine of up to $250,000.

During the plea hearing, Chansley's attorney asked yet again for his client to be released before sentencing. The Justice Department opposed this request, and Lamberth said he will issue a decision soon. When he is sentenced, Chansley will get credit for time already served in jail.

Sentencing was scheduled for November 17. As part of the plea deal, prosecutors agreed to seek a punishment between roughly three and four years in prison. This is the same potential prison term that other Capitol rioters who pleaded guilty to a single felony charge are facing.

He has been in jail since his arrest in January, and his attorney argued for his release on a few occasions. But the judge overseeing the case repeatedly ruled that Chansley is too dangerous to set free -- making Chansley part of a small group of rioters who aren't accused of attacking anyone that day, but have been detained before trial because of the potential for future violence.

The case highlighted how some Trump supporters are now facing real-world consequences by believing in fantastical conspiracy theories. Chansley's support for QAnon inspired his presence at the Capitol on January 6, which landed him in jail for the previous eight months. His lawyer now says Chansley is "seeking ... to step away and distance himself from the Q vortex."

Mental health has been a major part of Chansley's criminal case. He underwent a court-ordered psychological evaluation earlier this year, and his lawyer has argued that the government was making his pre-existing mental health conditions worse by keeping him behind bars before trial.

"He is a man with mental health vulnerability who has, for eight months, been in what any doctor is the worst thing you can possibly have done to you if you have a personality disorder, which is be placed in solitary confinement," defense attorney Al Watkins said during Friday's hearing.

Chansley answered procedural questions during the hearing and spoke briefly about the mental health evaluation. Lamberth ruled that Chansley was competent to plead guilty.

"I am very appreciative for the court's willingness to have me in my mental vulnerabilities examined, as well as I hope that your honor certainly didn't take any offense by anything (that) I told the psychiatrist. I certainly didn't mean anything personal. I just said I hope you were impartial," Chansley said, prompting Lambeth to reply that he wasn't offended by the comment.

Overall, at least 600 people have been arrested, and the Justice Department has secured more than 50 guilty pleas.