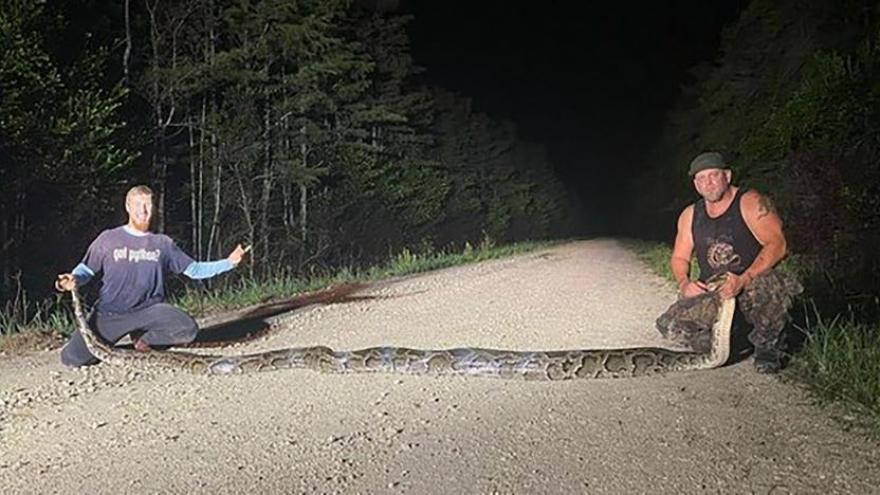 (CNN) -- The predator might soon become the prey if Florida scientists can confirm that Burmese pythons -- an extremely invasive species in the Everglades -- are safe for us to eat.

The Florida Fish and Wildlife Conservation Commission is collaborating with the Florida Department of Health to investigate the mercury levels in pythons to determine if they can be safely consumed. If so, the snakes may soon end up on restaurant menus and dinner tables across the state.

Pythons are nonvenomous constrictors primarily found in south Florida where they have posed a serious risk to native wildlife in the region. The snake is not native to the state, and began appearing in the Everglades in the 1980s when it was likely introduced as an escaped or released pet.

The FWC encourages residents to remove and humanely kill pythons when they can at any time during the year, and to report any sightings to officials.

"It is early on in the process for the mercury study. We are currently in the tissue collection stage of the project, and Covid has pushed our timeline back a bit," wildlife commission spokeswoman Susan Neel told CNN. "The plan is to have most of these samples come from pythons that are caught by our contractor program."

The contractor program -- The Python Elimination Program -- is led by commission and the South Florida Water Management District, which is funding the new mercury study. So far, more than 6,000 pythons have been removed from the Everglades through the program.

The objective of the study is to develop and share "consumption advisories for Burmese pythons in South Florida to better inform the public," Neel said, with the hope that Floridians could soon eat pythons to help manage their populations

"Mercury is a natural occurring element in the environment and it is high in the Everglades," Mike Kirkland, the Python Elimination Program manager, told CNN. "Mercury bioaccumulates in the environment and you will find high levels of mercury at the top of the food chain where pythons have unfortunately positioned themselves."

"We expect the results are going to discourage the public from consuming pythons, but if we can determine that they are safe to eat, that would be very helpful to control their population," he said.

When pythons are safe to eat, they can actually be quite delicious, says Donna Kalil, one of the program's python hunters.

Kalil is the first female hunter in the python removal program, according to Kirkland, and she has so far captured and euthanized 473 pythons. When she catches smaller ones, about 7 feet long, she uses a mercury testing kit she bought online to confirm they're safe to eat.

She then turns their white meat into food. First, she uses a pressure cooker to make the meat soft and tender. Later, she adds pasta sauce, chili or stir fry. She also likes turning the snakes into jerky.

"It's really good when you cook it right," Kalil told CNN. "This would be a wonderful way to get more people involved with helping us remove pythons from the environment. It would be a good thing for people to hunt and eat them but we need to make sure they're safe first."

Kalil spent her childhood catching and releasing snakes for fun. Despite her love for pythons, which she calls "magnificent creatures," she emphasizes the risk they pose to Florida's wildlife and the severe damage they've already caused to its ecosystem. Large pythons can even eat big prey, including humans.

"We have a severe python problem, which began when irresponsible pet owners released them into the wild and they've basically eaten all the native mammals down in Everglades National Park," Kalil said.

"There's literally 2 to 3% of rabbits and raccoons and possums left, so when I see a rabbit, I'm jumping with joy now. There just aren't any more of them because of the pythons."