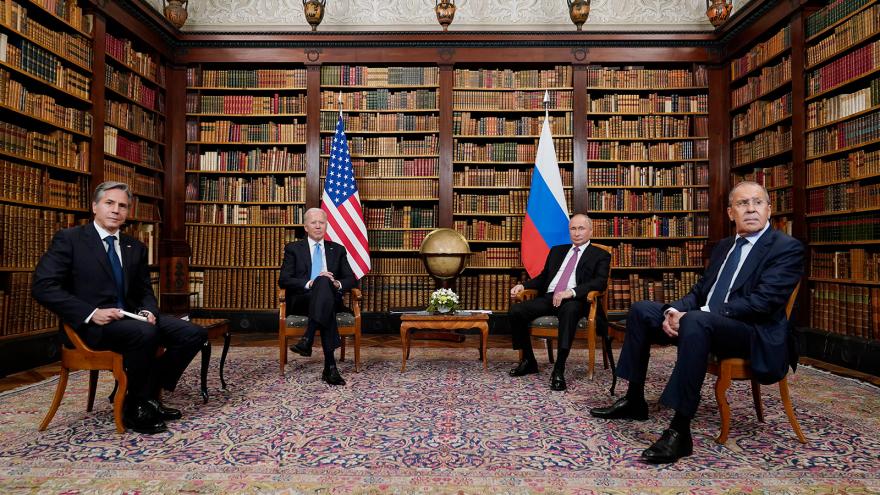 (CNN) -- Russian President Vladimir Putin praised US President Joe Biden Thursday, describing him as a "professional" who is "completely knowledgeable on all issues," according to a Kremlin transcript of Putin's televised remarks.

"Mr. Biden is a professional, and you need to be very careful when working with him so as not to miss something," Putin said during a videoconference meeting with graduates from Russia's Graduate School of Public Administration. "He himself does not miss a thing, I assure you, and this was absolutely clear to me."

"Let me say it again: he is focused, he knows what he wants to achieve and does it very skilfully, and you can instantly sense it," the Russian President added.

Putin was speaking in the aftermath of his three-hour summit with the American President on Wednesday in Geneva, where Biden pressed him on human rights and damaging cyber attacks on US companies, government and critical infrastructure that have been attributed to Russia-based criminals.

The Russian president's praise was striking in part because Russia had tried to portray Biden as mentally unstable during the presidential campaign. ABC News reported in July that the Trump administration withheld an intelligence bulletin warning of the Russian plot to spread that misinformation.

Putin was also setting a different tone than pro-Kremlin Russian political commentators, who more commonly see Democrats as more hostile to Russia, intent on using human rights as a cudgel to sanction and vilify Moscow.

While there were few tangible results from the summit, both leaders seemed to use the opportunity to size the other up. Speaking to journalists after the hours-long closed-door summit, President Biden described his meeting with Putin as "positive" in tone, while the Russian President told members of the press that talks had been "constructive."

Speaking during his own hourlong news conference just before Biden's, Putin called the talks "constructive" and said he had come away with a generally positive impression of the American leader.

"He's a balanced and professional man, and it's clear that he's very experienced," Putin said. "It seems to me that we did speak the same language."

Speaking to the graduates the next day, Putin described the atmosphere at the summit as "quite friendly."

"I think we understood each other and where we stand on key issues," Putin said.

"We do not see eye-to-eye on many of them, and we have pinpointed these differences, but at the same time we have identified the areas or the points that we can discuss and work towards achieving more converging positions in the future," he added.

The Russian President also highlighted several key issues of concern for both Russia and the United States, including regional conflicts, climate change and cyber security.

"I do hope the situation will change from recent years, and he will be able to work in peace," Putin said.

"For our part, we will defend our interests, and we are ready to resume the dialogue as soon as the American side is ready," he added.

"We, for our part, will defend our interests," he added.

Putin also made a sexist reference that seemed to be directed at White House press secretary Jen Psaki.

"The fact that he sometimes gets confused ... His press secretary is a young, educated and beautiful woman, and she gets things confused all the time herself," Putin said according to the transcript.