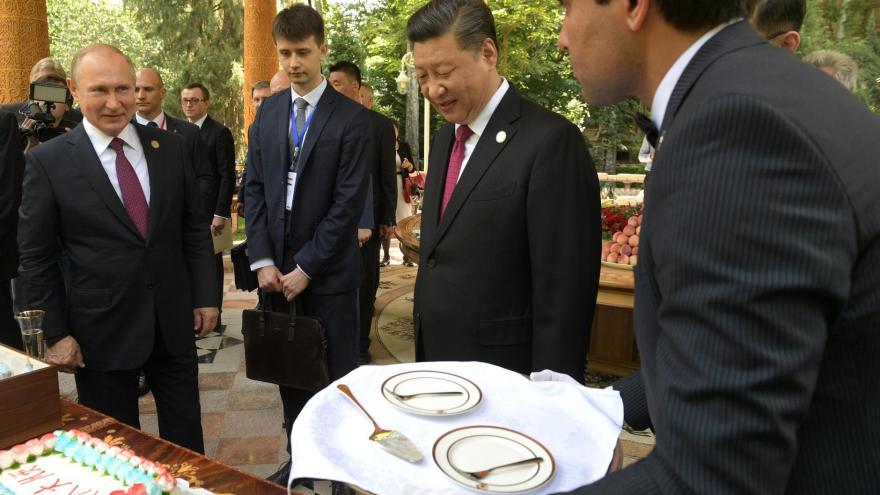 Putin presents Xi with ice cream on his 66th birthday.

"In a Christmas and New Year greeting message to President of the United States of America Donald Trump, Vladimir Putin noted that Russia and the US were historically responsible for ensuring global security and stability, and that Moscow speaks in favour of normalising bilateral relations and establishing an equal dialogue based on the mutual respect of interests," the statement said. "The President of Russia also reaffirmed his invitation to Donald Trump to visit Moscow to take part in the celebrations of the 75th anniversary of Victory in the Great Patriotic War."

Putin's well wishes and invitation come after the Kremlin on Sunday released a separate readout of a phone call between Trump and Putin in which the two discussed "matters of mutual interest" and reached an agreement to "continue bilateral cooperation in the fight against terrorism."

The Kremlin-provided statement of the call -- initiated by Russia and the first between Putin and Trump since July -- said that "Vladimir Putin thanked Donald Trump for the information shared via the special services that helped prevent terrorist acts in Russia," but did not did not provide additional details about what information the US had provided.

The White House issued a readout of the call on Monday, saying that Putin called Trump to "thank him for information the United States provided that helped foil a potential holiday terrorist attack in Russia."

"Both Presidents committed to continuing counterterrorism cooperation between the two countries," White House spokesman Hogan Gidley said in a statement. "The Presidents also discussed the state of relations between the United States and Russia and future efforts to support effective arms control."

Trump and Putin's unusually warm relationship has been the subject of intense scrutiny since Trump took office. Last year, he sided with the Russian President when he declined to endorse the US government's assessment that Russia interfered in the 2016 US presidential election and has repeatedly dismissed credible allegations that Putin uses violence against his opponents.

In November, Trump said he was considering Putin's invitation to attend the Victory Day Parade -- widely seen as a celebration of Russian military power on the anniversary of the victory of allied nations over Nazi Germany in World War II -- that takes place in early May in Moscow.

"I was invited. I am thinking about it. It's right in the middle of our campaign season, but I am thinking -- I would certainly think about it," Trump said at the time.

"President Putin invited me ... It's a very big deal, celebrating the end of the war ... so I appreciate the invitation," he added. "I would love to go If I could."

The last time an American president visited Russia was in 2013, when then-President Barack Obama took part in the G20 economic summit in St. Petersburg. Former President George W. Bush attended the parade, which marked the 60th anniversary of the victory over Nazi Germany, in 2005.

The May 2020 parade will mark the 75th anniversary. In 1995, then-President Bill Clinton went to Russia to attend V-Day celebrations. Protesting Russia's use of force in Chechnya, Clinton and other world leaders boycotted a military parade in Moscow. Later, he attended the Red Square Parade, which did not feature military hardware at the time.