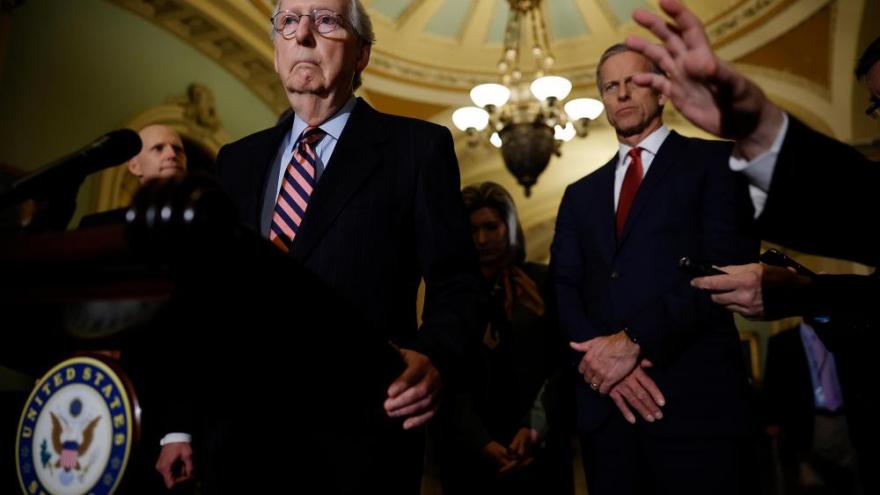 Senate Minority Leader Mitch McConnell indicated the Covid relief package will need to include an amendment vote related to Title 42.

(CNN) -- Senate Republicans blocked an effort on Tuesday to take up a $10 billion Covid relief deal over demands for votes on amendments -- including one to target the Biden administration's Title 42 immigration decision -- a sign that more aid to deal with the pandemic could be delayed for weeks.

The $10 billion deal to provide further aid in response to the pandemic had been announced on Monday and would allow the Biden administration to purchase more vaccines and therapeutics, as well as maintain testing capacity and research. It was announced with bipartisan support, but it is not yet clear when it will be able to pass the Senate.

Republicans are pushing for a vote on an amendment to target the Biden administration's plan to repeal Trump-era pandemic restrictions on the US-Mexico border that effectively blocked migrants from entering the US. Known as Title 42, the order allowed US border officials to turn migrants back to Mexico or their home countries immediately, citing a public health crisis.

A number of Democrats have been wary of the move and are signaling they could also vote for such an amendment.

At a news conference earlier Tuesday, Senate Minority Leader Mitch McConnell, a Kentucky Republican, indicated the Covid relief package will need to include an amendment vote related to Title 42 and they'll need to reach a deal to process several other amendments in order for the legislation to move forward.

"I think there'll have to be an amendment on Title 42 in order to move the bill," he said. "There's several other amendments that we're going to want to offer, and so we'll need to enter into some kind of agreement to process these amendments in order to go forward with the bill."

"Vaccines, therapeutics and testing were negotiated in good faith ... and they should not be held hostage to extraneous unrelated issues," Schumer said. "This is too important for the health of the American people."

"I want there to be no mistake about what just happened here on the Senate floor. Republicans blocked a bipartisan bill that would provide vaccines, testing and therapeutics for the American people," Schumer said.

The New York Democrat tried to move the process along on the relief package, but the failed procedural vote signals senators have still not yet worked out an agreement to move forward.

Republican Sen. John Cornyn of Texas told CNN the vote was going to fail "so we can have a negotiation."

Schumer added in his floor remarks on Tuesday, "There's still some time. I hope my Republican colleagues change their tune, quickly."