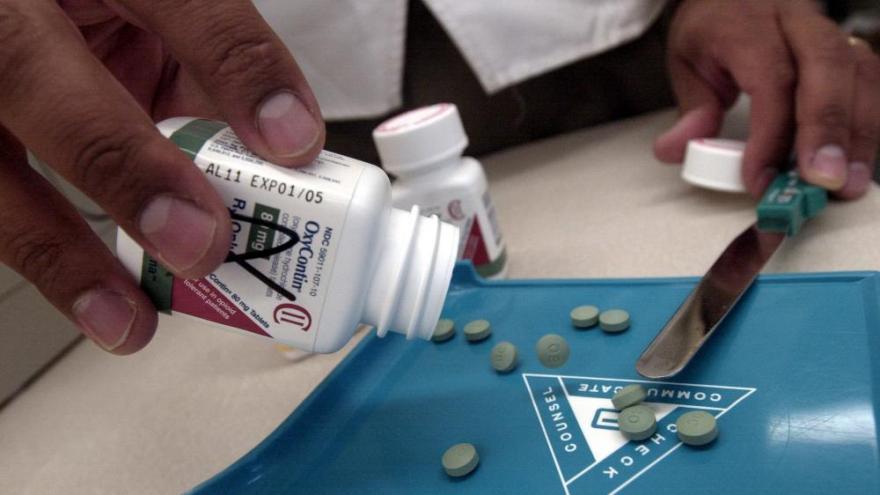 Purdue Pharma filed for Chapter 11 bankruptcy in New York as part of its framework for settling litigation with multiple states and governments.

(CNN) -- Purdue Pharma has filed for bankruptcy as part of its plan to settle litigation with dozens of states and and other plaintiffs who say the company fueled the opioid crisis.

Now the billionaire family that that owns the pharmaceutical giant is hoping the move "will end our ownership of Purdue."

Purdue Pharma, maker of the painkiller OxyContin, said its bankruptcy filing Sunday is part of an agreement to pay billions of dollars to states and local and tribal governments.

The company has denied any wrongdoing.

"This court-supervised process is intended to, among other things, facilitate an orderly and equitable resolution of all claims against Purdue, while preserving the value of Purdue's assets for the benefit of those impacted by the opioid crisis," the company said in a statement.

Purdue estimates after bankruptcy filings are complete, it will provide more than $10 billion in funding to address the opioid crisis. That will include settlements with 24 state attorneys general, five US territories and attorneys in multi-district litigation, the statement said.

"This settlement framework avoids wasting hundreds of millions of dollars and years on protracted litigation, and instead will provide billions of dollars and critical resources to communities across the country trying to cope with the opioid crisis," said a statement from Steve Miller, chairman of Purdue's board of directors.

"We will continue to work with state attorneys general and other plaintiff representatives to finalize and implement this agreement as quickly as possible."

The Sackler family, which owns the company, had been in talks for weeks to settle cases brought by more than 2,000 states, counties, municipalities and Native American governments against Purdue Pharma and other opioid companies.

The Sackler family issued a statement saying it hopes that the bankruptcy reorganization process "will end our ownership of Purdue and ensure its assets are dedicated for the public benefit."

"This process will also bring the thousands of claims into a single, efficient forum where the settlement can be finalized, reviewed by the bankruptcy court to ensure it is fair and just and then implemented," the Sacklers said.

"Like families across America, we have deep compassion for the victims of the opioid crisis and believe the settlement framework ... is an historic step towards providing critical resources that address a tragic public health situation."

Purdue also plans to create another company called NewCo. That company will produce medicines to reverse overdoses and will keep developing an over-the-counter naloxone product at little to no cost to communities across the US, according to the statement.

As for OxyContin, one of the most well-known drugs in the opioid crisis, a bankruptcy trustee will ultimately determine whether the Sacklers can continue manufacturing the painkiller.

"A journey of a thousand miles starts with the first step," Hanley said. "The PEC (Plaintiffs' Executive Committee) hopes this is the first step in bringing long-needed help to all communities in the nation that have suffered so terribly from the actions of the opioids companies."

But the proposed settlement has not received unanimous support. Many attorneys general oppose it and vow to keep fighting the company.

'A slap in the face'

Pennsylvania Attorney General Josh Shapiro said Wednesday the case was "far from over."

"This apparent settlement is a slap in the face to everyone who has had to bury a loved one due to this family's destruction and greed," Shapiro said in a statement obtained by CNN.

"It allows the Sackler family to walk away billionaires and admit no wrongdoing."

Last week, New York Attorney General Letitia James announced authorities had discovered the Sackler family had wired about $1 billion between the owners of Purdue Pharma, the entities they control and different financial institutions.

The New York attorney general's office is trying to determine how much money the Sacklers have, and where that money is.

In a written statement to CNN, a spokesperson for Sackler said "there is nothing newsworthy about these decade-old transfers, which were perfectly legal and appropriate in every respect.

"This is a cynical attempt by a hostile AG's office to generate defamatory headlines to try to torpedo a mutually beneficial settlement that is supported by so many other states and would result in billions of dollars going to communities and individuals across the country that need help," the statement said.

Sackler was involved in 137 wire transfers totaling nearly $20 million, and some of those transfers occurred as recently as 2018, according to a court filing by the New York attorney general.

Sackler received some of those transfers and redirected "substantial portions of those proceeds" to two other entities that own real estate on his behalf, the New York attorney general's filing said.

It said Sackler transferred nearly $40 million to Central Eight Realty LLC, which owns a New York townhouse on his behalf.

The filing also said Sackler made a $4 million wire transfer to Cherry Tree Holdings LLC, which owns a home in Amagansett, New York, on Sackler's behalf.

CORRECTION: An earlier version of this story misidentified who provided a written statement to CNN. The statement was provided by a spokesperson for Mortimer Sackler, not Sackler himself.