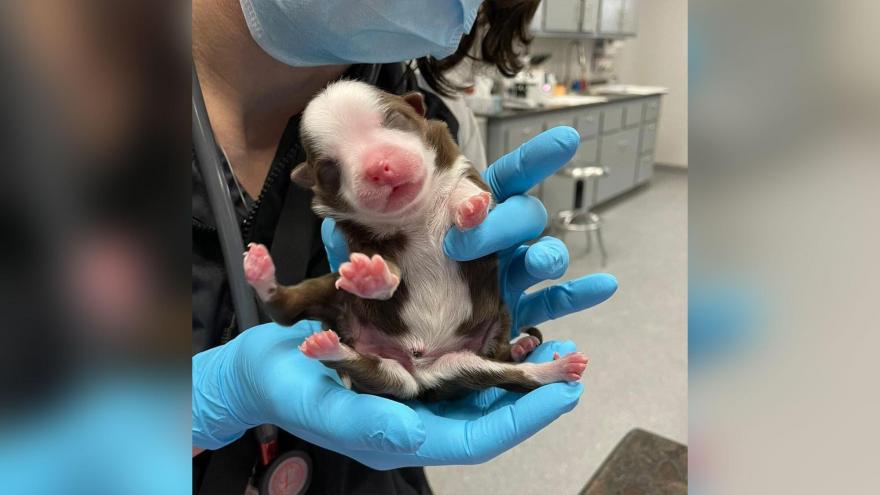 Skipper, a border collie and Australian shepherd mix, was born naturally on February 16 during a big snowstorm.

(CNN) -- Like other newborn puppies, Skipper likes to eat, drink water and go to the bathroom.

But the border collie and Australian shepherd mix is unique from the rest of her litter: She was born with six legs.

"This is a miracle named Skipper. Literally," Neel Veterinary Hospital in Oklahoma wrote on its Facebook page on February 21. "She has survived longer than we suspect any other canine has (at just 4 days old - published research does not indicate one has been born alive) with her combination of congenital conditions. You might notice she looks a little different - 6 legs!"

Skipper was born naturally -- along with eight brothers and sisters -- on February 16 in Oklahoma during a big snowstorm, Dr. Tina Neel, owner of the Neel Veterinary Hospital, told CNN.

After the storm, Neel said Skipper's owners brought her in to the hospital so vets could examine her.

"Our doctors knew that we needed further imaging to determine a diagnosis so we donated the service of an abdominal ultrasound," Neel told CNN.

"The ultrasound, along with radiographs, showed that she had two types of congenital disorders, called monocephalus dipygus and monocephalus rachipagus dibrachius tetrapus, which means she has one head and chest cavity but two pelvic regions, two lower urinary tracts, two reproductive regions, two tails and six legs, among other things."

Neel said Skipper was likely part of a twin in utero "and when the fertilized egg tried to split, it didn't fully separate."

"So only the back half of her body was able to duplicate," Neel said. "She also has signs of Spina Bifida along her spine."

One week after her birth, Neel said Skipper is thriving.

"She is strong girl! She loves to nurse and is able to scoot around just like a regular puppy," Neel said. "We think that she may have some things to overcome, but she is determined right now and thriving. Our veterinarians and her family don't see any reason not to give her the best chance a great life."

However, the vets are still monitoring Skipper, given the uniqueness of her situation.

"We will continue to research her conditions, monitor her development during rechecks and help keep Skipper pain-free and comfortable for the rest of life," the vet hospital wrote in its Facebook post. "She is doing well at home now."