Punta Ventana, one of Puerto Rico's natural wonders, has been destroyed by an earthquake 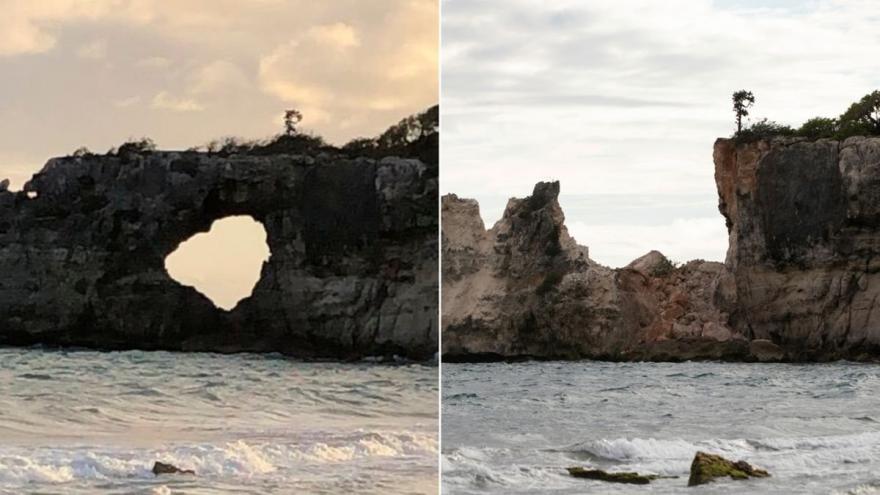 (CNN) -- A famous tourist landmark and one of Puerto Rico's most cherished natural wonders collapsed on Monday after an earthquake shook the island, Nelson Torres Yordan, the mayor of Guaynilla, confirmed.

Punta Ventana, which translates to "Window Point," was a stone arch shaped like a round window located in Guayanilla along the southern coast. The rock formation was one of the island's most iconic treasures and major tourist attractions.

A 5.8 magnitude earthquake struck the island on Monday, wiping out the natural structure.

The UPRM Meteorological Laboratory shared a photo on Twitter of Punta Ventana before and after the earthquake, showing where the soaring arch once stood before its tragic collapse.

A colonial church constructed in 1841 also "totally collapsed," during the earthquake, according to Yordan.

Another earthquake, this one measuring 6.4, and several other strong tremors struck Puerto Rico on Tuesday, killing at least one man and injuring several others. Tuesday's quake -- the strongest and most damaging of a series of quakes that have hit the island since December 28 -- moved Gov. Wanda Vázquez Garced to declare a state of emergency, activating the Puerto Rico National Guard.

It's likely the most damaging quake to impact the island since 1918.