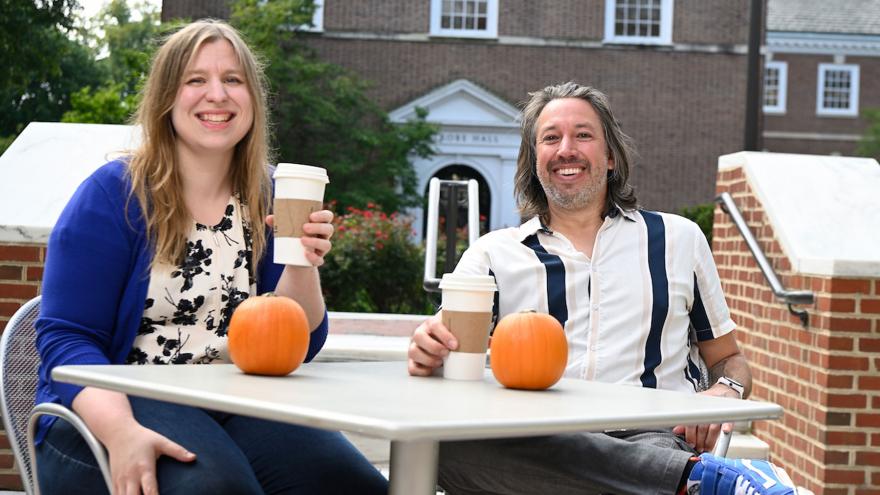 (CNN) -- If you're suddenly craving pumpkin spice lattes or pumpkin bread now that it's officially fall, it's not just your stomach talking. Catching a whiff of a pumpkin spice-flavored food or drink can trigger emotions and memories that go deeper than a hunger pang.

Combined with savvy marketing, it's no wonder the phrase "pumpkin spice" has become synonymous with the onset of fall.

This close connection accounts for the fact that smells such as musty books can take you back to long study sessions at the library or campfires can remind you of nights at summer sleepaway camp.

The popularity of pumpkin spice comes from both the scent of the spices -- the familiar cinnamon, ginger and nutmeg that are commonly used in many fall desserts and drinks -- and our previous experiences smelling, tasting and even just being aware of the aroma.

"Your brain fills in the gaps between the scent of the spices and the memories associated with the smell," Cormiea, a doctoral candidate in the department of psychological and brain sciences, said.

The brain is constantly processing and evaluating many pieces of information to help us build our individual reality, she explained.

It takes in everything we're seeing, hearing, smelling, touching and tasting, and it combines those sensory inputs with what we already know and believe about our environment.

"Our experience of the world is a construction -- our mind is constantly filling in lots of details," Fischer, assistant professor in the department of psychological and brain sciences, said.

It's not actually a pumpkin smell

What you're smelling isn't the scent of pumpkin itself, because pumpkin and other members of the squash family don't smell like baking spices on their own. It's not even a blend of spices specific to pumpkin pie or lattes but to several foods and drinks that have their own autumnal associations, such as apple crisp or mulled cider.

But the label "pumpkin spice" has become a powerful marketing tool -- so much so that simply reading the words activates the part of the brain that processes smell, according to Cormiea.

"Your brain automatically makes the connection between words and scent memory," she said.

The brain will file similar scents into the same category, research has shown. So even if what you're smelling isn't specifically pumpkin spice-related -- if, say, you're walking past some fresh apple cider doughnuts at the market -- the emotional reaction can be just as strong.

"If you have enough overlap between two scents, your brain can do the job of rounding up," Cormiea said. "At certain stages of neural processing, the pattern will be the same."

In their lab, Fischer and Cormiea have been able to adjust perception of various smells and tastes based on what name they've attached to the scent. "People are pretty bad at verbally identifying smells," Cormiea said.

Unlike the close connection with the memory center, the parts of the brain that process odor information are not well connected to the parts that process language, she explained.

Because of this, our senses can be manipulated into believing that pumpkin spice is a distinct scent from that of the gingerbread lattes sold in December, complete with distinct memory triggers.

"We can take those smells and apply labels to them and get them to smell similar or different based on what we call them," Fischer said.

When you smell 'pumpkin spice'

That's the other key to the emotional reaction to pumpkin spice: its timing.

"The seasonality of it is really intentional, it's part of the ploy," Fischer said. The powerful ability of smell to summon up old experiences becomes a mental transportation device, shifting you from summer to fall.

"Part of why it so strongly conjures the season and why they only sell it in the fall is because if it were available year-round, it wouldn't have such powerful memories," Cormiea said.

Make your own pumpkin spice blend

You can make a homemade pumpkin spice blend for your own pumpkin spice lattes or to flavor any fall desserts such as pumpkin bread, sweet potato pie or apple crisp. Feel free to tweak the amount of each spice until you find your ideal blend that's bound give you the warm fuzzies every time you sniff it.

Whisk the following spices together in a bowl:

Transfer to a sealed container and store at room temperature for up to six months. To use in your favorite recipes, substitute an equivalent amount of homemade pumpkin spice blend for the total amount of spices in the recipe.