Pumpkin season is upon us: Why we seem to embrace fall earlier every year 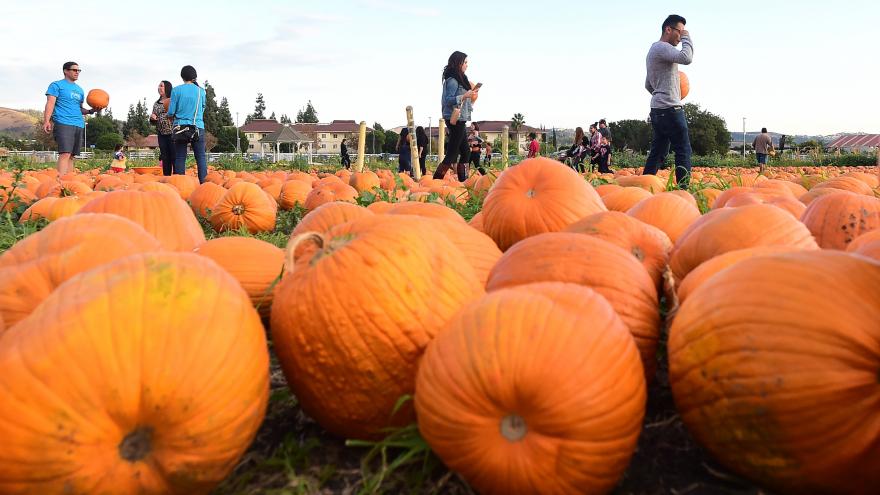 (CNN) -- The week after Labor Day has historically represented the unofficial start of fall, and though most leaves have retained their green color, the season of pumpkin spice is already in full effect.

On August 24 -- a full month before the official start of fall -- Starbucks posted a tweet that sent half of the internet into a frenzy, while the other half shook their heads in despair: "Pumpkin has entered the chat."

Every year, it feels like pumpkin spice mania comes earlier and earlier. Though some of these products may be blatant marketing ploys, some segments of society seem to welcome it back with open arms every time. From coffee to candles to deodorant, pumpkin spice is ubiquitous -- a signal that fall is upon us once more. Even if it's still 90 degrees outside and there's nary a golden leaf in sight, it's suddenly time for fires, apple picking and cozy sweaters. Fall begins when we say it does!

But why do so many crave the return of this season so much? What are we really reaching for when we cling to the edge of fall's garment, hoping it will envelope us sooner than it has before?

Part of it is nostalgia. Part of it is the warmth the season brings. But it could also just be the events of the past 18 months that are causing many of us to feel ready for fall early.

Some of the joyous anticipation of fall is just that: anticipation. When our mouths drool while imagining warm mugs of apple cider and pumpkin bread, it's the anticipation that gets us excited, rather than the actual reward,one psychologist says.

"So come August, we're like fall is kind of around the corner, we're anticipating all the good things that are coming," said Richard Lopez, professor of psychology at Bard College.

There are powerful cues that play into the nostalgia surrounding fall -- possibly even moreso than with other seasons. There's a nip in the air, the leaves are different colors, kids and their oversized backpacks are schlepping to school -- all of these signs are triggers that, oftentimes, remind us of our younger selves, Lopez said.

Think of holidays like Halloween, and the childlike joy it brings, with its costumes and bright orange-wrapped chocolate. Or even specials like "It's the Great Pumpkin, Charlie Brown." These are things that bring many ofus back to an earlier, more simpler time.

Those layers of positive memories and nostalgia, coupled with the anticipation of what's to come, all play into the excitement many feel about fall, Lopez said.

"It's this change of season; there's a lot of things to look forward to. We had those same experiences when we were young," he said. "Other times of year, there isn't that effect with that nostalgia or that anticipation."

Tom Hanks' character in the 1998 movie "You've Got Mail" sums it up perfectly: "Don't you love New York in the fall?" he asks. "It makes me want to buy school supplies."

But when we think of fall, it's not just nostalgia at play. There's a cozy aspect as well, visions of s'mores and snuggly hay rides. Even in beloved pumpkin spice sweets, it's not the pumpkin flavor that most people love, it's the warming spices of nutmeg, cinnamon and ginger.

The season, quite literally, makes people feel warm. And by extension, that could make folks feel safe, or cared for. The general wariness many feel from the last 18 months due to the uncertainty of the Covid-19 pandemic, civil unrest last summer and climate change-related weather events this year, could also be part of why people are craving fall sooner rather than later.

"It's just a lot to handle," he said. "All these things were true before, but we didn't have these kinds of events at this scale to force us to think about it."

This could make this upcoming fall a little more difficult, Lopez said.

"We want that feeling of safety and coziness, but ... in previous years, pre-Covid, we'd have an active spring and an active summer, and then we'd love to go home and cozy up," he said. "But home is a strange place now, because we've spent so much time here."

It means that those associations we've had with home, safety, coziness, comfort -- maybe even fall -- could be changing.

That doesn't mean that fall won't be as cozy as it has been in the past, or that those first few sips of sweet pumpkin coffee won't hit. It just means many Americans are different now than they were prior to March 2020. It's OK if fall feels different, too.