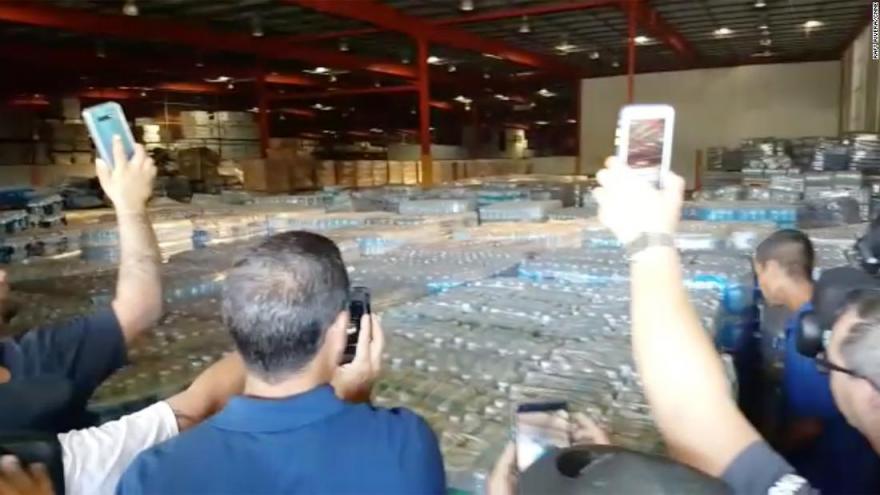 The emergency aid is believed to be from when Hurricane Maria hit the island two years ago, the governor said.

Earlier on Saturday, numerous pallets of water and other boxes with emergency supplies were found at a warehouse in the earthquake ravaged city of Ponce.

Several residents were seen opening the rolling metal doors of the building and calling for authorities to distribute the supplies. Families began lining up Saturday afternoon outside the warehouse, hoping to get bottled water, food and emergency radios, CNN affiliate WAPA reported.

Acevedo has denied allegations of mishandling, saying the agency has been actively distributing supplies, according to a statement released through the office of emergency management. No residents have been denied any supplies in the warehouse, including food, diapers, baby formula and cots, Acevedo said.

He said about 600 pallets of water were distributed when Hurricane Dorian and Hurricane Karen threatened Puerto Rico and during a drought that affected the island last year. Nearly 80 of those pallets remain in the warehouse because they expired, he said.

"There have not been orders to seize or destroy those items at any point," Acevedo said in a statement

Vázquez Garced has directed Secretary of State Elmer Roman to investigate the allegations and share his findings within 48 hours.

"There are thousands of people who made sacrifices to bring aid to the south and it's unforgivable that resources have been kept in a warehouse," the governor said in a statement.

Puerto Rico has been ravaged by a series of earthquakes since December 28. In the last two weeks, tremors and aftershocks have destroyed or severely damaged hundreds of structures and forced thousands of people in the southern area of the island to flee their homes.

More than 8,000 people have been living in outdoor shelters in the cities of Yauco, Peñuelas, Guánica, Guayanilla and Ponce. Some of those displaced are residents who are too afraid to return home for fear a wall or the roof will collapse.