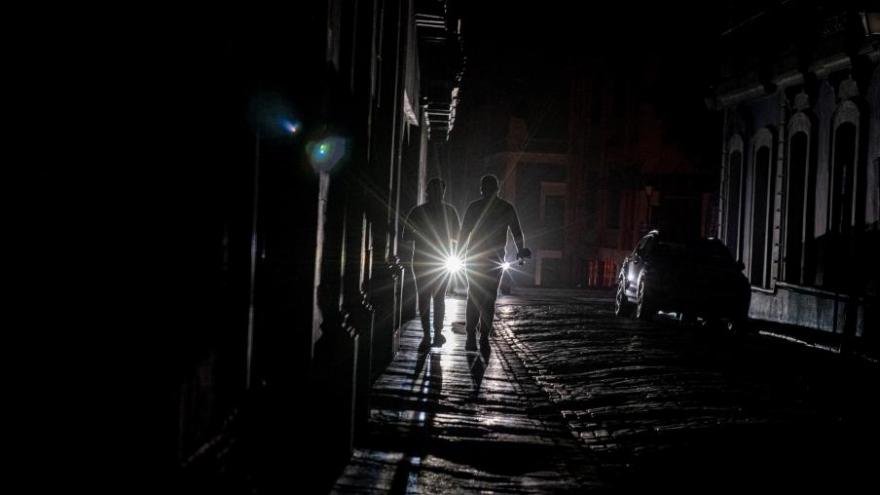 A vehicle's headlights are seen as people walk on a dark street in San Juan, Puerto Rico, after a power outage on the island on April 6.

(CNN) -- Electric service restoration efforts were still underway Thursday evening in Puerto Rico, a utility company said, a day after the start of an island-wide outage that left many people in the dark overnight and prompted school cancellations and other interruptions across the US territory.

Most customers on the island of about 3.2 million residents still were without power Thursday, officials said. By day's end, at least 380,200 LUMA customers have had their power restored as of 10 p.m. local time, LUMA Energy said in a statement on its Twitter account.

"Given the massive size of the outage, its scope and the necessity to operate in safety, we are informing our customers that the restoration will continue through Thursday night and into Friday," the company said in the statement.

An unspecified failure led to a fire at the Costa Sur power plant outside the town of Guayanilla on the southwest coast around 8:45 p.m. Wednesday, cutting power across the island, Kevin Acevedo, vice president of LUMA Energy, said during a news conference. Firefighters have since extinguished the flames.

The exact cause wasn't immediately known, the utility has said.

LUMA Energy, which operates the island's power grid, expected power to be restored within 24 hours of the incident, Acevedo said at the news conference.

Puerto Rico's Department of Education canceled classes Friday for students, but "school principals, custodians, and school cafeteria employees must report to the campuses starting at 10:00 am," the department said in a tweet.

The intensive care floor at Mayagüez Medical Center, on the island's west coast, temporarily was without power because of backup generator issues, prompting LUMA to especially focus on restoring power there, officials said.

Four patients on that floor were intubated, and would have been moved to a floor with electricity had service not been restored quickly, officials said earlier.

All hospitals were operational by Thursday afternoon, whether their power was restored or they were operating via a generator, according to Secretary of the Interior Noelia García Bardales.

"All hospitals are operating without any setbacks. All elective surgeries were performed today without inconveniences. All dialysis services are being performed without delays.", said García Bardales.

Puerto Rico's airports were operational, and no flight cancellations were reported due to the outage, according to officials.

Police have a plan to help circulate traffic with the lights out, but "we ask for cooperation from drivers on the roads," Pierluisi said.

Early Thursday, the utility said the "massive island-wide blackout" might have been "caused by a circuit breaker failure" at the Costa Sur plant.

The cause of the fire is being investigated, Acevedo said Thursday morning, adding that the equipment was up to date on maintenance inspections.

Cleanup at the plant is underway, and replacement parts have been identified and ordered, Acevedo said.

Correction: A previous version of this story misspelled the name of Puerto Rico's lead telecommunications and infrastructure engineer. It is Josue Colon.